If you're on the lookout for a new beer garden to check out this summer, then look no further.

The popular Anglers Rest pub in Cork has finally reopened with a brand new name and look after a lengthy closure and renovation, and is looking better than ever.

Now simply called The Anglers, it reopened in recent weeks and has already been a huge hit with customers who have been taking advantage of its fab new beer garden.

The interior has been refurbished with a brand new bar and seating areas, while the huge outdoor beer garden by the River Lee has been totally revamped just in time for the summer. 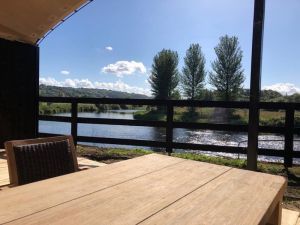 The 200-year-old Anglers Rest pub in Carrigrohane went up for sale in 2017 and was bought by Tony and Alice Cross, who also renovated Turners Cross Tavern, and they have spent the past few months extensively renovating the place.

In a post on The Anglers' Facebook page, they commented that they’d had ‘an overwhelming response’ to their opening and thanked everyone who had visited the pub so far.

The Anglers opens from 12pm each day and you can keep an eye on the latest events and updates on its Facebook page here.

READ NEXT: Garnish Island In West Cork Is Straight Out Of A Fairytale