Iron Man himself has appeared on the show on three previous occasions and each time his anecdotes have gone down well, with this story about himself and Jude Law working with Guy Ritchie on Sherlock Holmes being a prime example...

Downey will be joined by his Dolittle co-star Emma Thompson to discuss the fantasy adventure flick which is due for release in Ireland on February 7. The movie also stars Antonio Banderas, Rami Malek and Selena Gomez as part of an all-star cast and while it hasn't exactly gone down well with U.S. critics, Downey and Thompson should be good for a decent yarn or two this evening.

Also joining Graham tonight will be Hugh Laurie who will be talking about his role as Mr. Dick in The Personal History of David Copperfield which was released earlier this week.

Monty Python star Terry Gilliam will also be on to talk about directing The Man Who Killed Don Quixote, an upcoming adventure-comedy starring Adam Driver. Since The Graham Norton Show is pre-recorded, it's not known if Terry will be asked about the death earlier this week of his Python co-star Terry Jones, but he did pay tribute to his pal on Twitter, and you can read his tribute below. 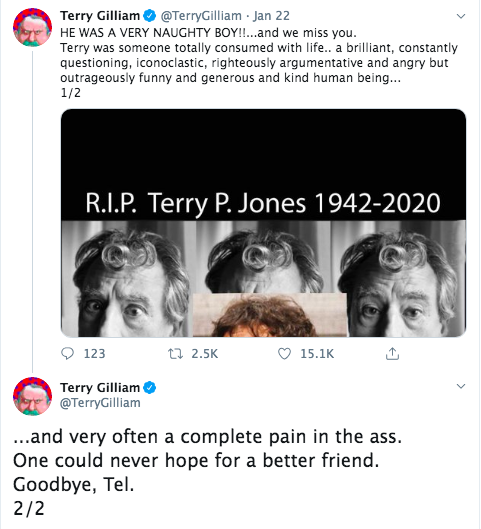 Completing tonight's Graham Norton line-up will be singer-songwriter Sara Bareilles, who will perform She Used to Be Mine, from her musical Waitress.

You can catch all this and more when The Graham Norton Show airs tonight on BBC One at 10.35pm.