Saltwater Festival in Westport has announced a load of new acts who will join the already-confirmed Dermot Kennedy, The Coronas and Johnny Marr.

The inaugural Saltwater Festival will take place over the June Bank Holiday weekend and today a whole host of new acts have been confirmed to take to the stage at Westport House in Co. Mayo.

Kicking things off on Friday, May 29 will be the aforementioned Kennedy, as well as the newly-announced Hudson Taylor, Lyra and Jerry Fish. Also performing on this night will be Somebody's Child, Bitch Falcon and Fish Go Deep among others.

The Coronas will be joined on Saturday, May 30 by the huge-popular dance duo Basement Jaxx while there will also be performances by Maverick Sabre, Lee "Scratch" Perry, Norman Jay MBE and Little Hours.

Finally, Sunday, May 31 will see former Smiths guitarist Johnny Marr joined by the likes of The Stranglers, Wallis Bird, The Scratch and Crazy P Sound System. 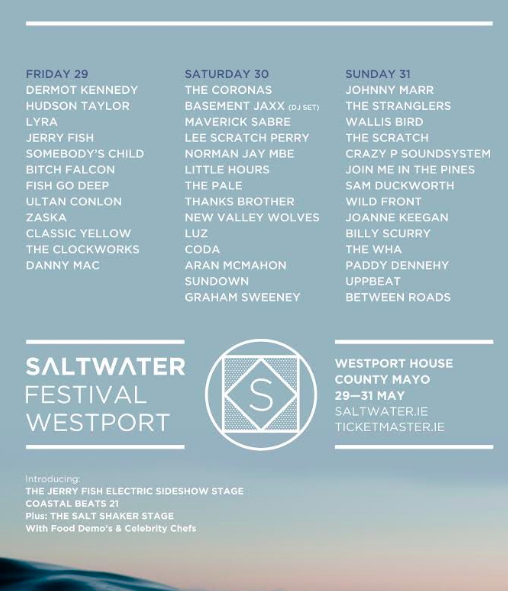 Speaking about the line-up, Saltwater Festival director Ray O'Donoghue said:  "We’re actually really happy with how the line-up turned out. Who wouldn’t be with the likes of Dermot Kennedy and Johnny Marr? We’re also thrilled to announce The Jerry Fish Electric Sideshow Stage and The Saltshaker stage that will host Cooking Demos from local and international Chefs. There’s also a nice DJ stage where you’ll be able to listen to the likes of international acts Crazy P & Norman Jay. We actually can’t wait until May 29th.”

Tickets to Saltwater are on sale now and are available via this link.