Sinead O'Connor got fans excited with a tweet this week regarding some upcoming shows in Ireland.

O'Connor took to Twitter to reveal five shows in Ireland next summer, with dates seemingly confirmed for Dublin, Cork Belfast, Waterford and Galway.

Her followers responded with delight at the prospect of seeing O'Connor perform but it would seem that the shows weren't as confirmed as she thought because she soon deleted the tweet.

At the time of writing, the only upcoming dates on O'Connor's website are around Europe, Canada and the United States.

Whether the five Irish shows end up being re-confirmed remains to be seen. 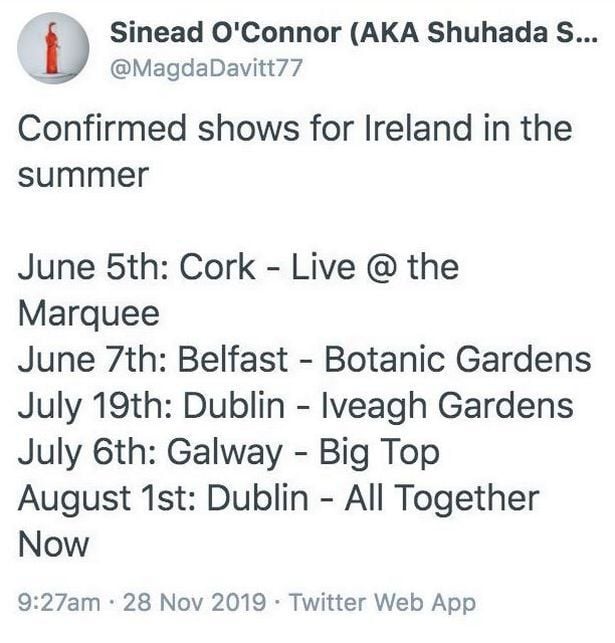 O'Connor, also known as Shuhada Sadaqat, recently admitted that she has enjoyed returning to performing live after a lengthy break from touring.

She took to the Late Late Show studios two months ago, when she wowed viewers and the audience with a stunning rendition of her most famous song, Nothing Compares 2 U.

"I took a good long break out, probably about five years from performing live because I was really working so hard for years I was burned out," O'Connor told Ryan Tubridy. "So it is a bit, I suppose, of a comeback, but it was an intended one.

"When I was younger I used to not necessarily always appreciate my job," she added. "But now that I'm back in it I appreciate it much better."

This Twitter thread discusses all the reasons why Ireland is great