Twitter is supporting #EveryWoman this International Women’s Day, with a campaign run through @TwitterWomen – a business resource group who works for gender equality and the advancement of women in tech.

Twitter has released statistics about the top tweeted-about women of 2019 in honour of International Women’s Day.

Along with revealing the top Twitter moments of the year and creating special emojis and lists, all to celebrate ladies around the world and the day that’s in it.

According to the research, conversation around International Women’s Day (#IWD) has been growing online across the globe with a whopping 125million tweets about feminism and equality being shared over the past three years.

As for the famous women featured in the most tweets – amongst them, you’ll find singing sensations Ariana Grande and Beyoncé. Not all that surprising, considering the fact that they basically rule the world… or at least the one I live in anyway.

US Congresswoman Alexandria Ocasio-Cortez has been making waves with her astute political commentary, while Halsey makes the list due in part to her regular interaction with fans. Other well-known US politician Hillary Clinton features to finish out the top five.

The stats also show that feminism and equality were regular topics of discussion, with peaks including: 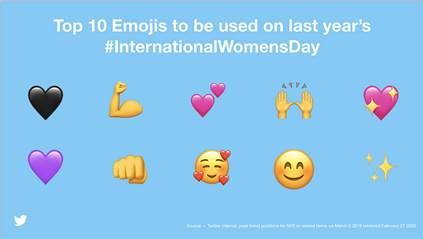 Cheers to all the ladies out there.

READ NEXT: Laura Whitmore gives moving speech on the importance of kindness