When this pub owner from County Offaly came across a negative review of his business, he wasn't having a bar of it.

The Sunday World published a review of JJ Hough's pub in Banagher as part of their Pub Spy column and gave it a mere two out of five stars.

It described the bar as a 'unique experience', and gave comments like:

"Framed MMA gloves look to be the only thing anyway new in a pub that quite possibly has never received a makeover. The bare concrete floor is still visible."

The reviewer also went on to say that they left the pub 'scratching their heads'. 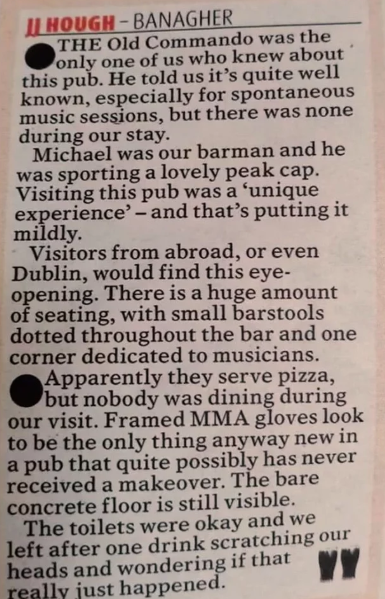 Well, the pub's owner, Ger Hough, was having none of it and decided to respond by making a video reacting to the comments.

He posted the video to Facebook, writing, "Recently, The Sunday World PubSpy 'Commandos' harshly reviewed us giving us two pints out of 5 and commenting 'framed MMA gloves look to be the only thing new in a Pub that quite possibly has never received a makeover. The bare concrete floor is still visible'.

"This ignores the fact that the pub is a heritage site and protected structure, and the floor they refer to dates back to an old 14th Century Monastery."

The video shows Ger replacing toilet paper with copies of The Sunday World, taking a sledgehammer to the 'bare concrete floor and smashing some of the artwork, and has now been viewed over 50,000 times.