So you're looking for a holiday with a difference?

Going on holiday doesn't always have to be a mad stint halfway across the world for a year. It seems these days we do it in stages: interrailing-Asia-America-Canada-South America-Oz... sound familiar? I bet half your friends are in at least one of these places right now.

Well let me let you in on a secret, one of the best holiday destinations for 2019 is going to be Croatia.

It's one of the most stunning countries I've ever visited and every city around it is completely unique. You could do your very own interrail trip while you're there and you'll still be stunned every time you get off a train or bus.

Planning a holiday can be hard so I've done the hard work for you. My advice would be to do two weeks to get the best out of the list below. All areas are super accessible by regular train, bus or boat.

Here's my top pick for this beautiful country on the Dalmatian coast:

Dubrovnik is a seaside city located in southern Croatia. It's famous for its old town, shabby-chic vibes, steep picturesque hills and historic architecture.

You can explore the city along its medieval walls and nab the perfect picture. There are a lot of beaches too which is quite rare for the country - ideal for vacay season. It really is an Instagrammers paradise.

It's one of the most popular destinations with tourists as of late so be aware of that if you're looking for something a little quieter.

Pula is a stunning city and definitely a hidden gem.

There were far fewer tourists in Pula than any of the other cities I visited during my travels. Pula is kind of a mixture between Dubrovnik and Zadar. It has the iconic limestone streets, a lot of Roman-style architecture and lies beside the sparkling Adriatic Sea.

We took a boat trip from the pier that included dinner and wine as well as an informative tour - by far the best touristy thing we did while we were there.

Split is the party place.

During the evenings the place is swamped with various bar crawls, stags and hens. Prepare yourself for some of the craziest nights of your life!

Try the Tower pub crawl, it was so wild that my friends and I did it twice.

When you want to take a break from the drink, take a trip to Krka waterfalls, probably one of the most stunning places I've ever seen!

Most hotels and hostels arrange buses to and from for a pretty good price. You'll spend the whole day here so pack lunch, bring good footwear and don't forget the suncream.

Krka Waterfalls has to be one of the most beautiful places I've ever been and seen💧 the water was so amazing to swim in. 🌺 #Krka #Croatia

Zagreb is the country's capital and it's much more built up than any of the other areas I visited.

There's so much history there and a walking tour is a must.

The place is loaded with restaurants and bars so it's great craic in the evenings. It's also very close to the national park Plitvice which is well worth the visit.

Hvar is one of the most incredible places.

This tiny island is a mixture of rich yacht owners, party people and Insta-huns posing on every rock they find.

We went on a boat tour around the island and went swimming through caves which was one of the best things I've ever done. There's also a tower at the top of the island that has some of the most breath-taking views. 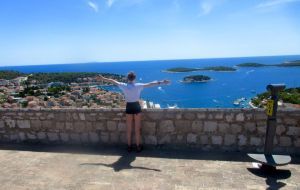 Today we went on a boat trip, jumped in beside red rock caves and swam into the back of them. Probably one of the most amazing experiences I've ever had. 🐠 #hvar #islandboattrip

Saving best for last, Zadar was probably my favourite stop of all.

The town is built on ancient Roman ruins which still remain. It's bursting with history, culture, art and creativity.

Down by the pier you'll find a sea organ which plays music from the waves as well as an astonishing astrological light display. Top that off with what's said to be the best sunsets in the world and you can see why I loved it so much.

Everything about Zadar is magic.

Alfred Hitchcock famously said that Zadar has the most beautiful sunset in the whole world, and I couldn't agree with him more. 🌞 #Zadar #Croatia #SunsetZadar

What I love about Croatia is that is suitable for all from students to couples, pensioners to young families.

So what are you waiting for?

It's time to get booking!

Adventure tourism on the rise for Irish holidaymakers