One of the biggest events of the year takes place this weekend.

The Bray Airshow sees thousands of people flock to the seaside town to watch the spectacular event and here is everything you need to know.

As so many people attend the event, your best bet is to get public transport. The DART is definitely the easiest but six bus companies pass through Bray: Dublin Bus, Go-Ahead Ireland on behalf of Transport for Ireland, Bus Éireann, Finnegan’s Bray, Aircoach, St. Kevin’s Bus Service to Glendalough.

Road closures will also take place within the town which is another reason to leave the car at home.

Have a look at what roads will close and the times: 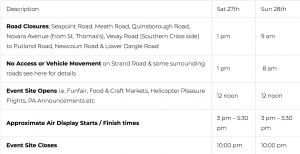 Highlights from the event will be:

You can check out the full schedule for both days here.

On top of the Airshow, there will be a food and drink village, a fun fair and if you're feeling frisky you can even take a helicopter ride for just €50. You can find out more about all of this here.