An adorable rare tiger cub has been born at Fota Wildlife Park in Cork.

The Sumatran tiger cub was born on June 25, although the news was just confirmed by Fota today.

It’s the second cub to have been welcomed at Fota by mother Dourga and father Denar; they previously welcomed two-year-old Dharma who was recently transferred to Edinburgh zoo as part of their breeding programme.

Dourga arrived at Fota from Le Parc des Félins in France in 2014, while Denar came from Warsaw City Zoo in Poland the same year as part of the European Endangered Species programme.

Sumatran tigers are classified as critically endangered by the International Union for Conservation of Nature and are the rarest subspecies of tiger in the world. 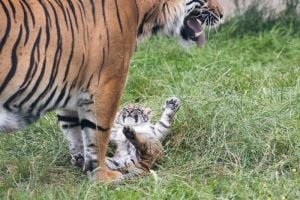 The park is currently gearing up to welcome its 10 millionth visitor, which is expected to happen in the next week or so.

Sean McKeown, Director of Fota Wildlife Park, said, "Fota has been open as a conservation charity and wildlife park attraction since 1983 - since then the yearly attendance has risen to over 465,000 annually.

"The excitement is building as we prepare to honour the 10th million visitor - who we expect to walk through the gates in the next seven or eight days, all depending on the levels of visitor numbers really.

“That lucky person will win a holiday for two in South Africa including a Safari trip so it will be well worth a visit for anyone considering a great day out this August."

There’s also plenty of great runner-up prizes on offer, including 10 annual passes and a number of overnight stays at the likes of Fota Island Resort, the Radisson Blu Hotel and Spa Little Island, and the Midleton Park Hotel.

READ NEXT: This Stunning Mayo Spot Has Been Named The 11th Best Beach In The World