I love how when the weather gets warmer we all start cooking a little differently. We want lighter flavours and the health buzz is in full fucking steam. I wanted to create something that was zingy, packed a punch and made boring old chicken look like a bit of a rock star. This dish is mind blowingly good and super easy to prep. Follow the simple steps and eat this al fresco and you could just about imagine being in the South Of France. Fucking savage…

If you were being super healthy and watching the weight you could leave the spuds out and make this carb free but throwing a couple in means you won't be fucking starving an hour later. 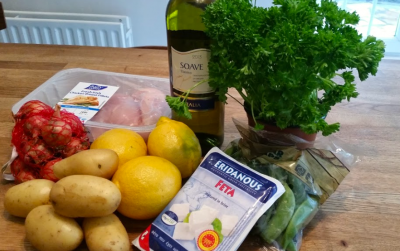 Lash the baby potatoes on to boil first. If I've lost you at this stage feck off down to the chipper instead. We've barely started. 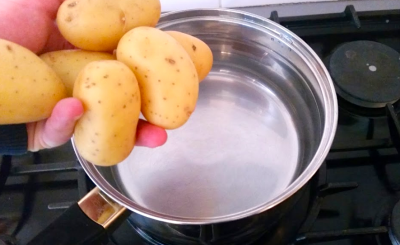 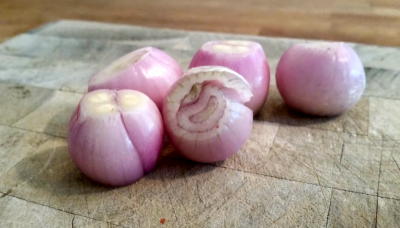 Slice the bastards up into nice thin slices. If you are crying at this stage it's probably because you are a big girl's blouse. 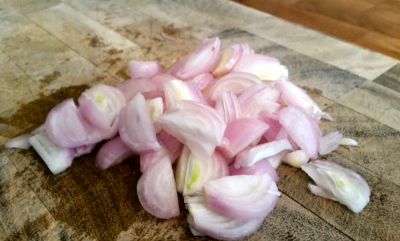 Zest the lemon. Only grab the yellow bits though because the white part underneath is bitter and tastes like ass. 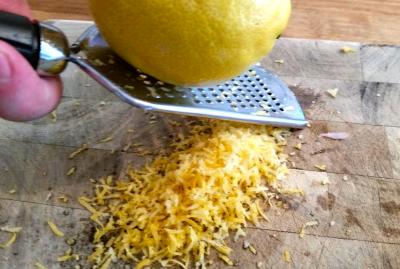 Squeeze the juice of the lemons into a bowl. Make sure you get those annoying little pips out of there. How long until the genetically modified pip free lemons anybody? Chop the shit out of the parsley. No exact science here just a big knife and a lot of chopping like you see the chefs do it on the telly. 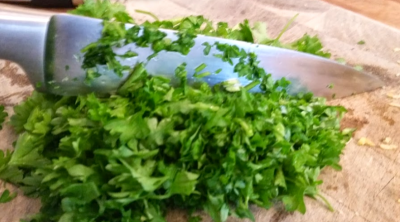 Crumble up the feta and set it all to one side like this. Thats the hard work done now! 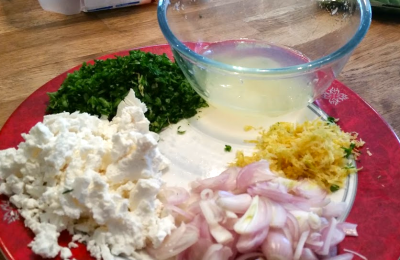 Grab out the breasts. Always the best part. 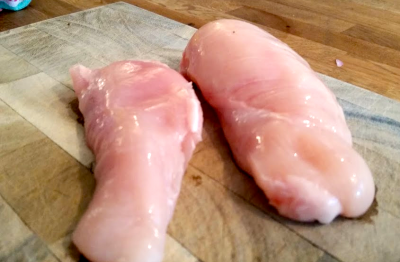 Slice them up super thin. As thin as you can make them. Season them up with salt and pepper and drizzle some oil over them. 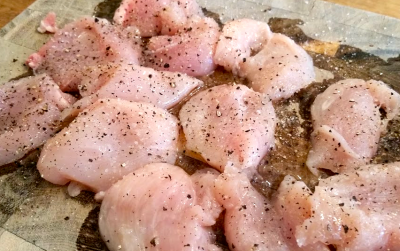 Lash on a large frying pan or even a small wok. The bigger the better. When it gets nice and hot fuck all the chicken in and cook it for about 2 minutes on one side without turning it so as it gets nice and golden brown. 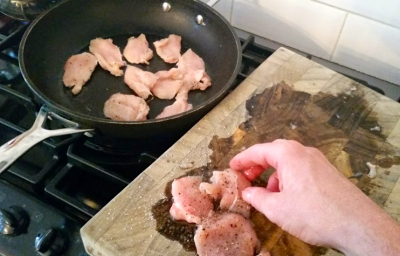 Flip the chicken over. and at the same time fuck in the shallots and the lemon zest. Cook the whole thing for another couple of minutes tossing it around to make sure nothing stick. 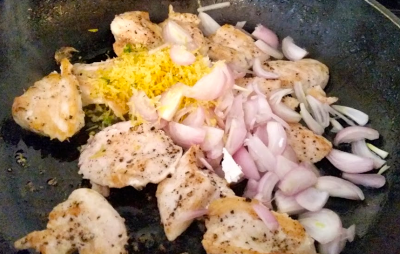 When it is all nice and golden brown throw in a glass of wine. Not a small miserable one you get in restaurants but a big alcoholic's portion. Big full glass. 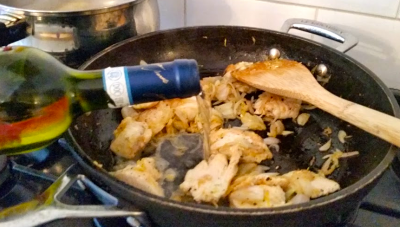 When the wine comes to the boil lash in the lemon juice. 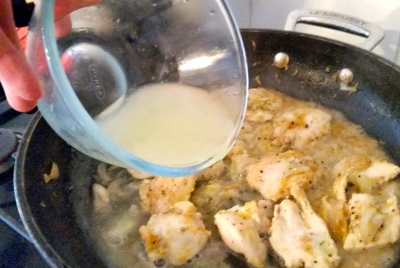 While the sauce comes to the boil throw the sugar snaps in with the spuds and cook the bastards for about a minute. 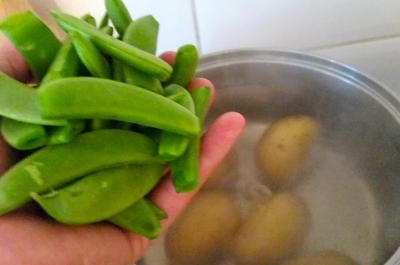 Strain the spuds and the sugar snaps (you could easily use green beans instead). 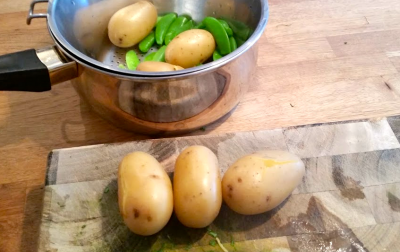 Slice the potatoes. They'll be hot so be careful not to burn yourself. 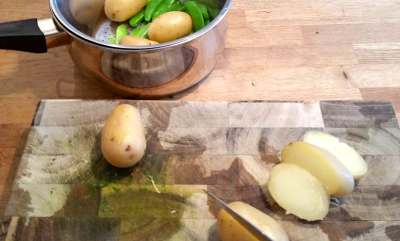 With the sauce coming up to the boil lash in the beans and sugar snaps. 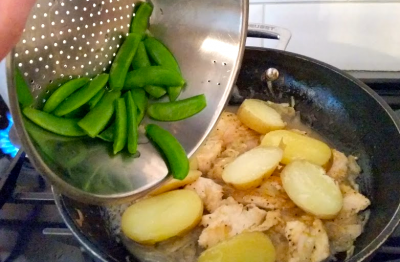 Throw the parsley in and stir the whole thing up. 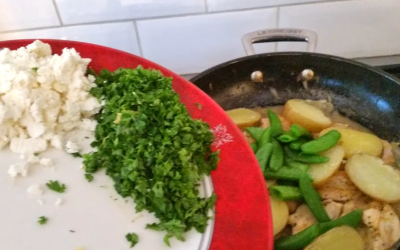 Take it straight off the heat. Just before you serve at the very last minute fuck in the Feta cheese. You don't want it to melt into shit so leave it as late as possible. 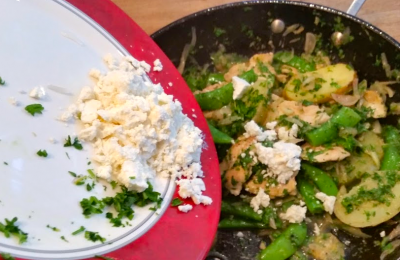 Combine it very very gently in with all the other flavors. It should be smelling absolutely fucking incredible at this stage! 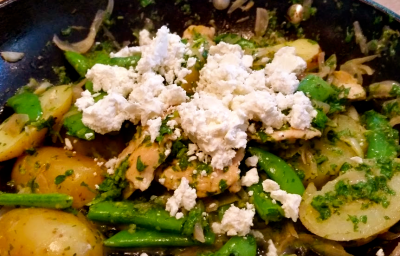 Serve it up as is. You have the perfect summer dish with fresh, zingy flavors. Savage and the absolute bomb diggity. 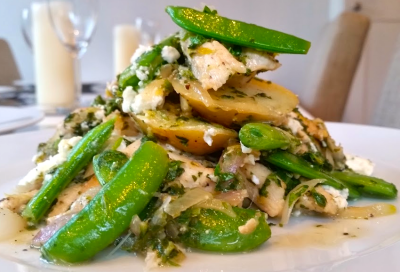 When people think about chicken they instantly dismiss it as a boring old shitty meat but as this recipe shows it can be amazing. Couple of simple everyday ingredients, a bit of love in the cooking and a savage sauce and there you go…savage tastes. You really don’t need to be Gordon Fucking Ramsay to cook this one and if the sun is shining and you manage to eat it outside you’ll think of yourself as a new Masterchef. The bomb diggity.

Did you know you can go hovercraft racing in Cavan?