Want a big roast dinner but know what a massive commitment that is?

Hours of prep, cooking and serving don't seem realistic given your head is in a hoop and you're hank marvin right NOW! This recipe will solve all of those problems for you. Tastes exactly like a roast and is ready in about 30 minutes. Tastes seriously bad-ass so get stuck in...

The key is getting a pork chop with the bone in. You'll have to go to a good butcher for this. Don't use the shitty little ones they try to palm you off with in the supermarkets – and if you can't get purple sprouting broccoli, go with regular.Preheat the oven to 180C/Gas Mark 4. That's 350F for anyone who cares. 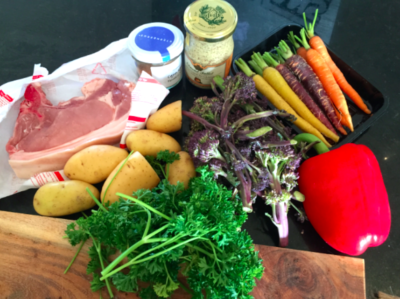 Slice up the red peppers. Nice big pieces so as they don't go to shit when you roast them. Peel the baby carrots. You could use big ones if you don't have anything else but the flavour and speed of cooking make all the difference. Most good places will have them. 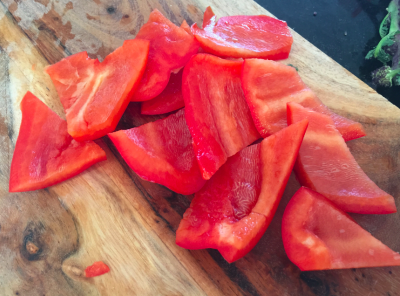 Lash all that into a roasting tray and chuck in a good bit of oil, salt and pepper. Mix it all up. Throw it in the oven, which should be nice and hot by now. 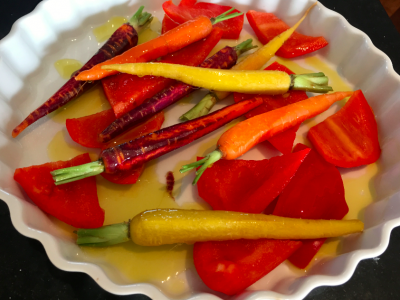 Now with the pork chop lash a load of cajun seasoning onto it. A little salt, pepper and a good lashing of oil. Rub it into the meat so as it is all covered evenly. Throw on a chargrill pan or regular frying pan if you don't have one. Piping hot. Basically as hot as you can get it and just throw the chop in. Don't be moving it around or shaking it like a knob trying to be a chef. Just leave it be. 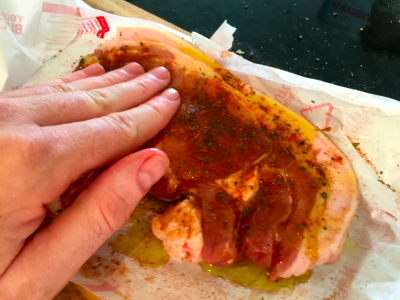 After about 90 seconds flip the bastard around 90 degrees, This is so as you get those lovely lines marked onto the meat and you impress all your friends. Once you've done the same on the other side, whip it off the heat and throw it on top of the veggies in the oven. This will help the pork stay moist while also making the juices flow into the veg. Win win! 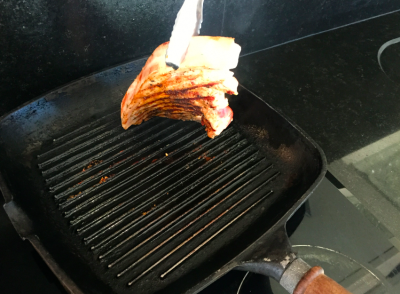 Chop up the parsley as fine as you can. While you are doing this throw on a big pot of water for the broccoli as well, bringing it up to the boil. 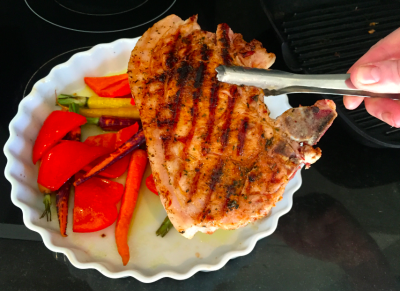 Whip everything out of the oven. Take the pork off and let it rest on the chopping board. Crucial stage this so as the meat can relax and be super tender. 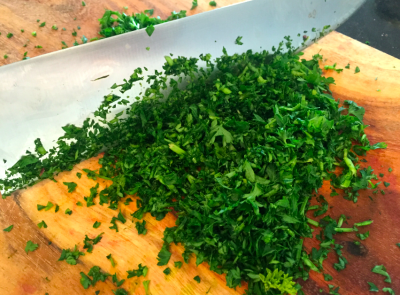 Lash the broccoli into the boiling water, It isn't going to take more than 60-90 seconds because you want a nice bite in it rather than being a mushy load of shite. 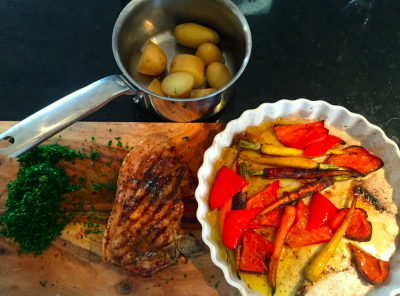 Throw a couple of spoonfuls of the mustard into the potatoes and about half the chopped parsley. Splash of slat too, then start mashing the bastards up. 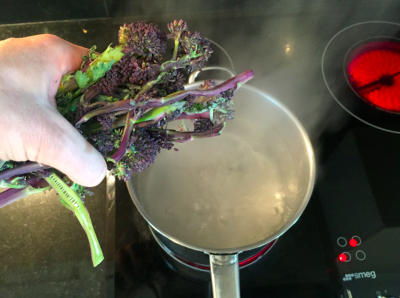 Taste the spuds to make sure they are perfect and get ready to start assembling this seriously bad-ass roast! Strain the broccoli off, making sure all the water is gone. Then throw it into the roast veg and toss it all around. The pork juices and cajun in there will make for a wicked taste! 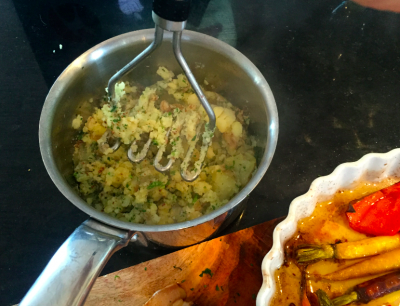 Lash in a handful of parsley and toss the veg up one final time.

Throw the potatoes onto the plate first followed by the pork chop (which should only have taken about 12-15 minutes to cook). Serve it up immediately and watch as your companion is wowed by the fact you've pulled a roast dinner out of nowhere in about 30 minutes. Savage work! Where this recipe works amazingly well is for one or two people without having to go to all the trouble the full roast usually entails. You're not going to be cooking this up during the week as it's a big proper meal and none of us have time for that – but for a weekend treat or for somebody worried about cooking a full roast this is the way to go. Go on and live it a lash! Where this recipe works amazingly well is for one or two people without having to go to all the trouble the full roast usually entails. You're not going to be cooking this up during the week as it's a big proper meal and none of us have time for that – but for a weekend treat or for somebody worried about cooking a full roast this is the way to go. Go on and live it a lash!

WATCH: Paul Mescal has got them moves like Jagger in new Rolling Stones music video