On the way home from a recent trip to visit a relative in the Caribbean, we found ourselves having to catch a connecting flight at Chicago's O'Hare Airport.

The journey from the Windy City to Dublin was the third leg of a fairly exhausting journey which included an unexpected overnight stay in Charlotte, North Carolina but sure that's a story for another day.

With the warm embrace of Dublin Airport in sight, you can probably guess that all we wanted to do was get home and stick the kettle on. However, with six hours to kill in O'Hare, we naturally opted to head for a drink of the stronger variety.

Walking up and down the terminal, it was clear that there were plenty of options, as you would expect in one of the world's busiest airports. We eventually decided to prop ourselves up at the bar of a comfortable-looking craft beer joint called Wolfgang Puck.

It was my first time ever stepping foot in Chicago and despite not leaving the airport, my instant impression was that Chicagoans were a warm and friendly bunch, thanks to the greeting we received from the lady behind the bar.

As knowledgable as she was welcoming, she listed out all the beer options on offer and we opted for a couple of pints of Chicago's very own Goose Island. When in Rome and all that.

With a handful of leftover dollar bills between the pair of us, we gave the nod and sat back, satisfied that the order would be money well spent.

Well, it wasn't long before the smiles were very much wiped off our faces as the barkeep placed our beers down before uttering the words "that'll be 26 dollars and 76 cents please." 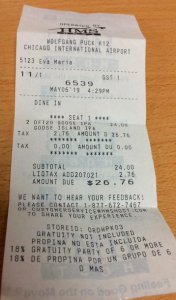 - "Yeah, these are draft beers, not bottles."

Our new friend appeared to be under the impression that the confusion stemmed from us wanting bottles rather than pints. Looking aghast at each other, it became clear that we were expected to part with the equivalent of €23 to enjoy a couple of frosty ones as a means of passing the time before our flight.

The tension hung in the air for a few seconds before we both eventually agreed to pay up, our Irish inclination of not wanting to cause a fuss getting the better of us.

To avoid rushing this clearly heavenly nectar, we sat and enjoyed it for the next 40 minutes or so as American business types shuffled in and out around us, apparently not batting an eyelid at what we thought were fairly extortionate prices.

As for the beer itself? Well, it was pretty damn tasty and if it weren't for the holes left in our pockets, I would have happily ordered another one or two and I'm not usually one to be frugal when I'm at the bar.

Having not been on American soil since 2007 (apart from being in airports), I wondered if the prices were standard enough but anyone who we've told the story to since we got back has raised their eyebrows as well.

I'd say stick to the water the next time you're in O'Hare but we found out later that the newsagents were charging a pretty penny for bottles of that too.

Let this be a lesson to us all!

READ NEXT: Berlin In Four Days: Here’s How To Make The Most Of It