Excitement is building ahead of this year's All Together Now festival in Co. Waterford and if you have a ticket then today's announcement will have you fit to burst.

Event organisers have confirmed the return of the Arcadia Afterburner which has mesmerised festival-goers for the past few years. The 360 degree installation made its name at world-renowned events like Burning Man and Glastonbury and will be back in Waterford this year along with its flaming spire and DJ booth, keeping revellers dancing away long into the night. 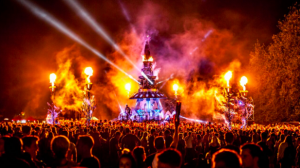 DJing at the set-up will be the likes of Erol Alkan and Josh Wink but as impressive as the Afterburner is, it's not the only thing that Arcadia will be bringing. Ticket holders will be able to enjoy Lords Of Lightning 'The Duel', which is described as an exhilarating 'harnessing four million volt bolts of white hot electricity.'

There will also be a chance to visit Arcadia's festival pub, The Tow And Hitch, for a well-earned sit down throughout proceedings.

The little ones will also be catered for with Arcadia hosting a kids' rave on Sunday from 6.30pm until 7.30pm, making the whole experience fun for all the family.

It all takes place over the August Bank Holiday and it's certainly shaping up to be quite the weekend.

READ NEXT: Picture This Have Just Announced A December Show For Killarney

This Seaside Hotel Has The Most Breathtaking Views In Ireland

Five Things To Do In Waterford When It's Lashing Rain Outside