A survey carried out by sustainable business SunDrift has revealed Galway as the most popular destination for people to travel to once lockdown ends.

With the country now having moved into phase 2 of the Government's roadmap for the easing of restrictions, people are turning their attention to the possibility of a trip away. However, with holidays abroad still on the long finger for the time being, most are looking towards staying local with a recent survey commissioned by SunDrift confirming this.

According to the survey, 90 per cent of Irish people have confirmed that they intend to travel more once lockdown ends with the majority of the 500 people who were surveyed favouring staycations over trips abroad.

It looks like Irish tourist destinations may be set for a much-needed boost in visitors though as 60 per cent of participants said that a local holiday will be their first choice this year - with only 30 per cent saying they'd opt for a holiday abroad (10 per cent of those surveyed don't intend on taking a break this year).

And as for the most popular Irish destination? Well, unsurprisingly the crown goes to Galway which was named as the most popular choice for a weekend away. Nabbing 24 per cent of the vote, Galway edged out the Kingdom (16 per cent) and Wexford (16 per cent) for the top spot. Cork, Donegal and Sligo also got quite a few shoutouts securing 12 per cent of the votes each. 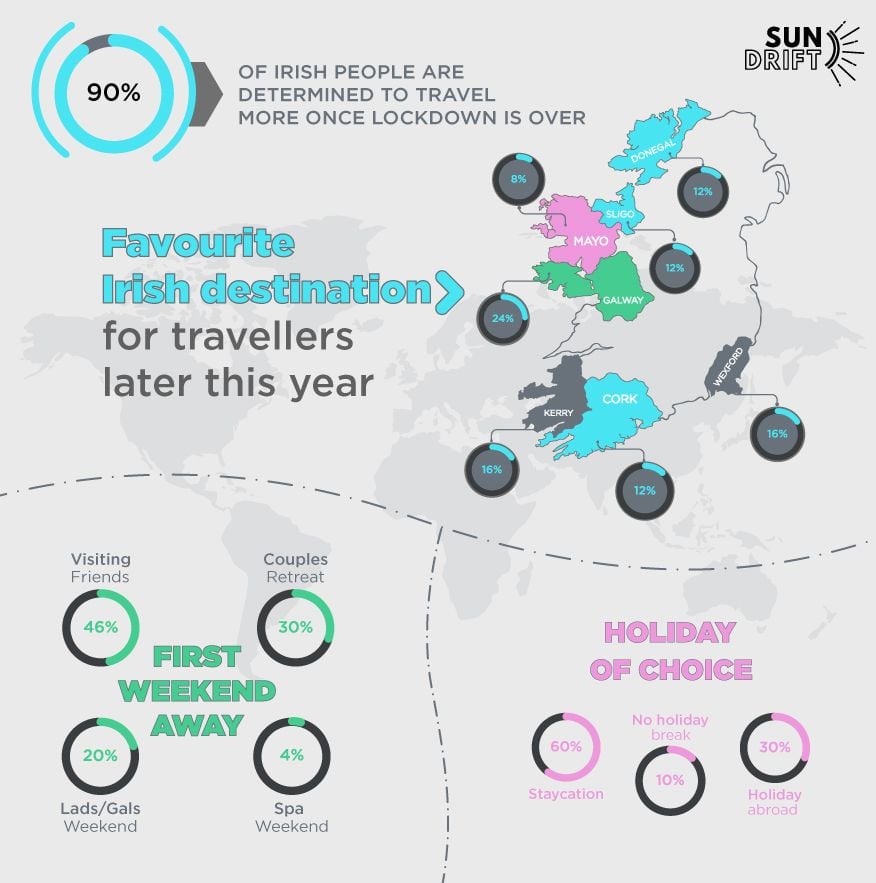 The survey results revealed that 65 per cent of people plan on leaving their home country more often once restrictions are lifted, however only half of motorists actually miss driving as much as they used to pre-lockdown. So perhaps a road trip isn't the answer then...

“Having been confined for the past couple of months it’s clear from our survey that the Irish public has every intention of getting outdoors, exploring and making new memories as soon as the opportunity arises. We may have been grounded this summer but it seems Irish travellers have every intention of taking flight once things return to normal!”

There's an outdoor gig happening in Salthill this evening

One of our favourite Galway pubs is back open