Angela Scanlon has been named as the host of a new RTE Saturday night show.

The new one hour show will run for eight weeks, taking the slot previously occupied by Ray D'Arcy.

Confirming the news with a post to her social media, she wrote:

"I have just signed to be the new host of RTE Saturday Nights with my very own show!! it's something I've wanted to do for AGES & I can't quite believe it's happening...

We've been working away for the past couple of months trying to create a show that I wish already existed (although probably lucky it doesn't!)"

📣NEWS 📣 (Side note before I get to it) I once ruined my mother-in-laws surprise birthday by asking if she was looking forward to the party 🤯 so the fact that I’ve kept this a secret is quite an achievement in itself... BUT, that’s not the news & its no-ones birthday.... I have just signed to be the new host of RTE Saturday Nights with my very own show!! It’s something I’ve wanted to do for AGES & I can’t quite believe it’s happening... 🙏🏻 We’ve been working away for the past couple of months trying to create a show that I wish already existed (although probably lucky it doesn’t!). “Angela Scanlon’s Ask me Anything” kicks off in March 9.40pm @rteone 📺 I can’t promise Oprah but I’m trying to have a house kitten on set (ginger obviously), I’ll keep you posted on that xx *It will also be available on @rteplayer for everyone in the UK* 💅🏻 OK bye 👋🏻

No stranger to our telly screens, the Ratoath native started her career with a lot as a stylist on Off The Rails, going on to present a number of other programmes including Oi Ginger! in 2013.

Well known on the UK broadcasting scene as well, she has hosted shows such as The One Show on BBC One as well as Robot Wars with fellow Irish TV personality Dara Ó'Briain.

Entitled Angela Scanlon's Ask Me Anything,  it's set to kick off on RTE in March and will see a host of familiar faces join Scanlon on the couch and agree to be asked absolutely anything.

She later added that it will also be available to stream on the RTE player for anyone abroad.

Loads of celebrity friends paid their congratulations with a very enthusiastic comment from Amy Huberman. 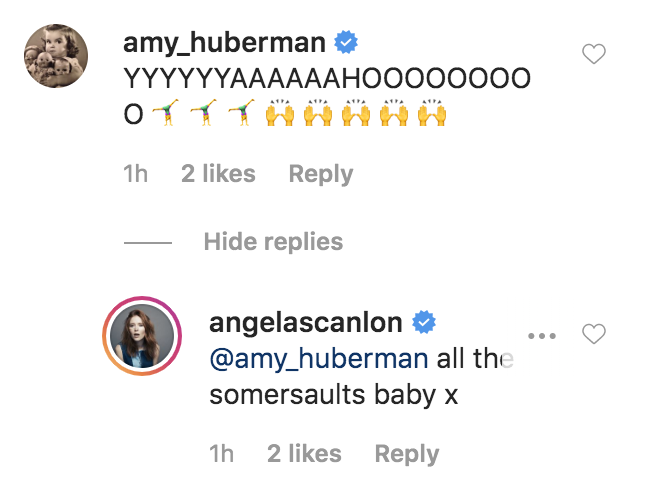 Scanlon currently hosts Your Home Made Perfect on BBC Two along with her own BBC Radio 2 show and podcast Thanks A Million.

No rest for the wicked.

READ NEXT: New dating show for those living in rural Ireland looking for applicants

Changes to Folkster bridesmaid appointments due to continued no-shows