The Late Late Show has announced its guests for tomorrow night and you're probably reading this thinking "is it Friday already?"

Yep, another week is nearly done even though the vast majority of us have barely left the house. In terms of the Late Late though, the show goes on and this week's edition will see the studio bereft of an audience for the third successive week.

It will still be beamed into our living rooms as always though and the episode will feature a tribute the people who are working in Ireland's frontline services during the Covid-19 outbreak. Coming just 24 hours after a national applause is set to take place, it's great to see these heroes get the recognition they so deserve.

As well as that, there will be a special performance from Hozier, who will be launching an emergency on-air appeal for the ISPCC. The organisation is currently experiencing an upsurge in calls to Childline and Hozier will be performing an exclusive set live in studio and informing viewers on how they can help. 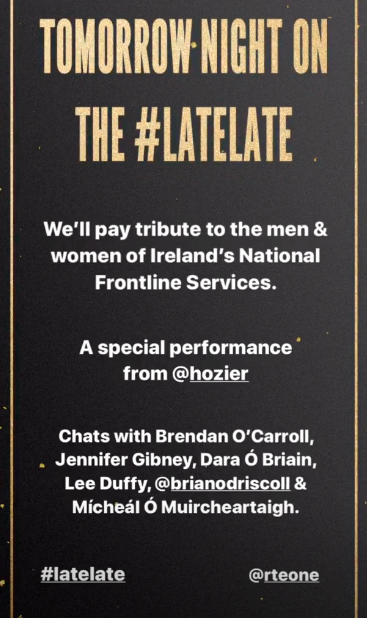 Some of Ireland's biggest names will also be chatting to Ryan Tubridy, including former Irish rugby captain Brian O'Driscoll and Britain's favourite Irish expat Dara O Briain, who will be speaking from London. Legendary GAA commentator Micheal O Muircheartaigh will also be on, as will Mrs Brown's Boys stars Brendan O'Carroll and Jennifer Gibney will be calling in from Florida.

Finally, Ryan will be speaking to League Of Ireland footballer Lee Duffy about his experience of being hospitalised with coronavirus as a fit and healthy young man.

The Late Late Show airs in the usual time slot of 9.35pm on RTE One on Friday night.

READ NEXT: Michael D Higgins has written a poem urging us all to 'Take Care'