Love Hate will soon be beamed into living rooms across the country once more after RTE announced a host of additional programming today.

It's now almost six years since much-loved crime drama Love Hate wrapped up after fives series and many would argue that we haven't seen anything like it since. The Dublin-based show made national icons of characters such as Nidge and Darren and while it's available to watch on RTE Player, television viewers will soon be able to relive it all without the fuss.

RTE has today announced that it will be airing all five series of the show to keep people entertained during the Covid-19 outbreak and if that wasn't enough to perk you up, there's plenty more where that came from.

Bachelors Walk and Pure Mule will also be aired in the coming weeks and Channel 4 favourite Derry Girls will be making its Irish TV debut. Sports fans will be delighted to know that the national broadcaster has responded to public demand and will be showing memorable World Cup and Olympic moments as well as old All-Ireland GAA Finals. 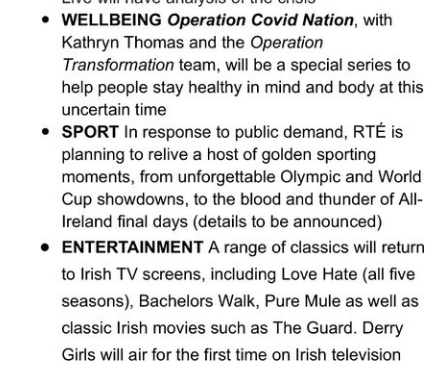 Viewers will also get to see Operation Covid Nation, on which more can be read here, and Home School Hub will be an educational programme aimed at primary school children, airing twice a day.

On the virus itself, Lessons From Wuhan will see David McCullagh speak to leading Chinese medical professionals about what Ireland can learn while updates from the Department of Health will be broadcast every Tuesday and Thursday at 7pm.

It was all revealed by RTE Managing Director Jon Williams in a tweet this afternoon and you can see the full list of additional programming by clicking on the post below...