Caroline Flack will not present the upcoming winter series of Love Island.

Flack has found herself in the headlines in recent days after being arrested and charged with assault following an incident at her home last week.

Last Thursday, police were called to the 40-year-old's house in Islington, London, where she lives with tennis player boyfriend Lewis Burton.

Burton has since come to the defence of Flack on social media, describing his girlfriend as "the most lovely girl" and "loyal and kind."

Amid the ongoing media furore, Flack has decided to step down from the upcoming series of Love Island, which will take place in South Africa.

"There have been a significant number of media reports and allegations in regards to my personal life. While matters were not as have been reported, I am committed to co-operating with the appropriate authorities and I can't comment further on these matters until the legal process is over," Flack said in an Instagram statement. 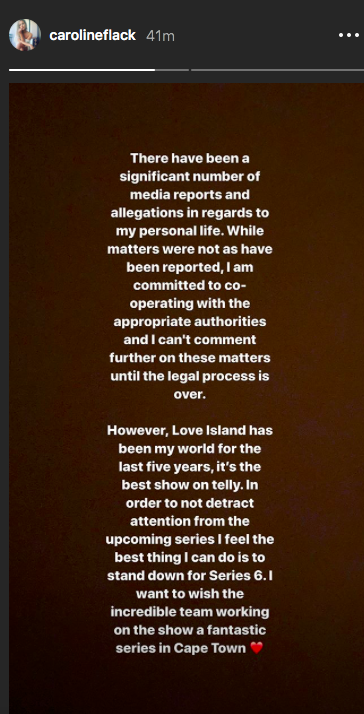 "However Love Island has been my world for the last five years, it's the best show on telly. In order to not detract attention from the upcoming series I feel the best thing I can do is to stand down for Series 6. I want to wish the incredible team working on the show a fantastic series in Cape Town."

In recent days, speculation has rife regarding a potential replacement for Flack.

It has been suggested that last year's popular Love Island contestant, Maura Higgins, could be favourite to take over.

Despite being scheduled to take part in January's Dancing On Ice series, Higgins teased an exciting project in the sun.

The Longford native posted a photo from a plane last weekend with the caption: "Off to the sun to shoot something very exciting."

The next day, she posted a topless photo from a scenic and sunny location with the caption: "Do one winter."

It's worth keeping an eye on this one over the coming weeks.