Singletons are getting creative with their date ideas as we move into a new era of dating while isolating.

One would think that quarantine would put an end to dating, but it seems that quite the opposite is true as Bumble has revealed that virtual dating is on the rise. Saying that making connections is important now more than ever, singletons are still on the search for 'the one', looking for ways to connect with matches while still maintaining a safe social distance.

Using research from its 5,000 strong pool of users across Ireland and the UK, the results have shown a steep rise in the trend of virtual dating and how the dating landscape has changed since social distancing became the done thing. With the app originally born as a means to reinvent the somewhat antiquated rules of dating, Bumble users have adapted to the new 'normal' seamlessly, forced to come up with creative alternatives in the face of traditional face-to-face dates.

And according to the research 83 per cent of Bumble users across Ireland and the UK would consider video dating - with 64 per cent opting to have a virtual chat over a drink/coffee. That's one way to keep the romance alive. 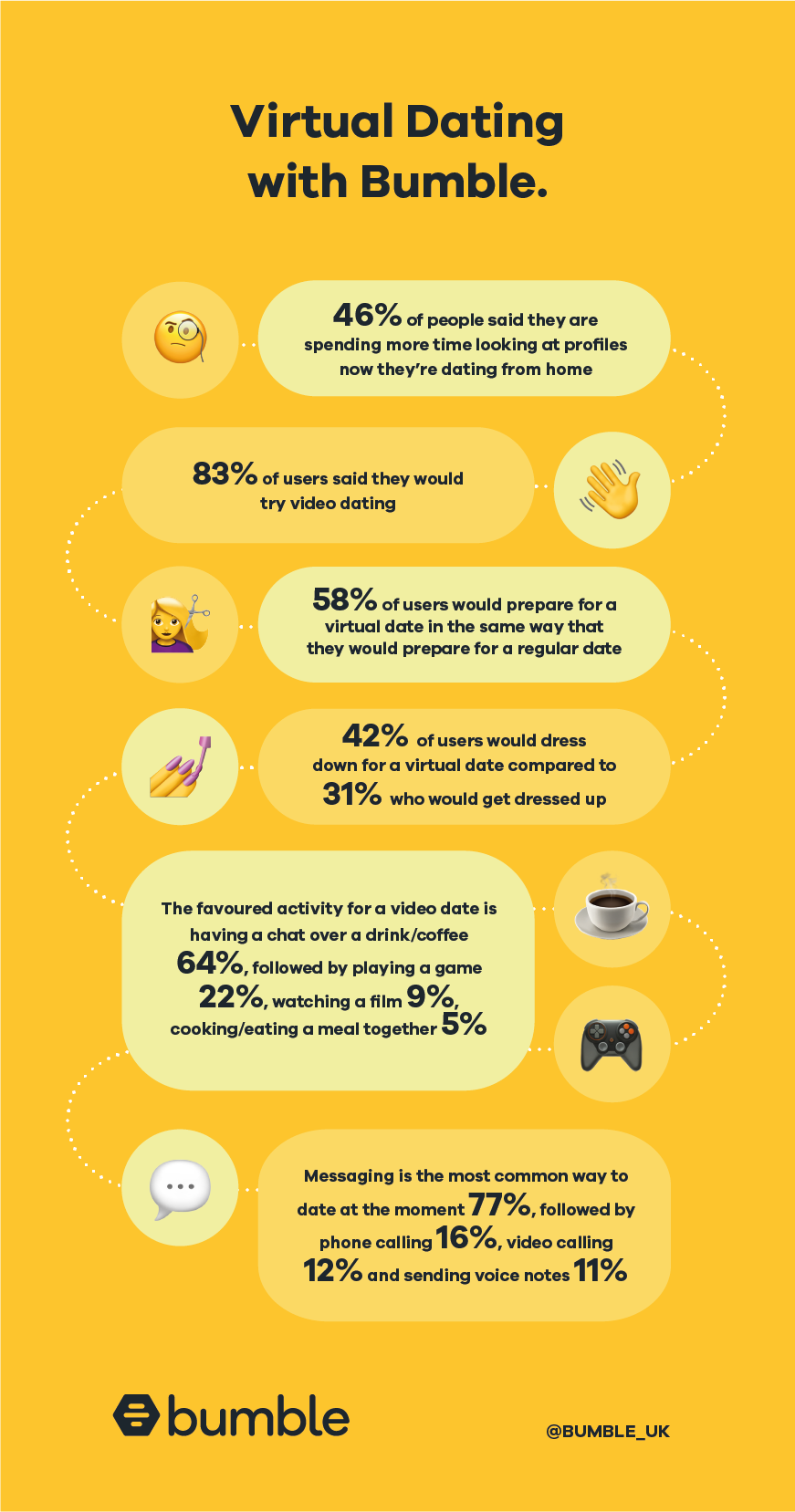 On top of that, almost 50 per cent (46 per cent to be exact) of respondents also admitted that they're spending more time looking at profiles now while dating at home. Not all that surprising, there's only so much Netflix one can watch.

As for pre-date build-up? 58 per cent of users are preparing for virtual dates the same way they would for a regular one... virtual first impressions count too.

The app introduced in-app voice calls and video chat back in July of last year, however, the features have seen a surge in popularity in recent weeks - (21 per cent increase in the past week alone) allowing users to get to know each other without having to exchange contact details prematurely.

Other statistics reveal that the app has seen a 35 per cent increase in the number of messages sent (particularly amongst users between the 23 to 29 age bracket) and that the average call lasts 14 minutes... more than enough time to ask the important questions.

With almost 90 million users worldwide, Bumble continues to stand as one of the most popular dating apps around - also offering people the chance to make friends and career network via Bumble BFF and Bumble Business.

READ NEXT: Maura Higgins and Chris Taylor team up for hilarious take on viral TikTok video