Saipan is word that most Irish people would prefer never to hear again but to those outside our shores, this handy guide explains everything that went on.

Back in 2002, Mick McCarthy and Roy Keane had a dispute on the Asian island of Saipan that was more civil war than football disagreement. We all know what happened so we won't go over old ground but this clip by American website SB Nation is different in that it offers a somewhat outsider perspective.

The 15-minute clip explains to viewers what happened in minute detail, from the very start of McCarthy and Keane's relationship as players to their infamous "beef" in Saipan.

Everything is covered from the Harry Ramsden's eating challenge that some would say symbolised Jack Charlton's approach to team bonding, to the fact that then-Taoiseach Bertie Ahern offered to sort things out between Mick and Roy during that ill-fated summer.

The story is well-told at this stage but it does seem kind of fresh to hear it without an Irish accent. Check out the clip in full below...

The Saipan Incident was so big that it even has its own Wikipedia page, where one of the listed is 'prolonged national self-examination' (below) 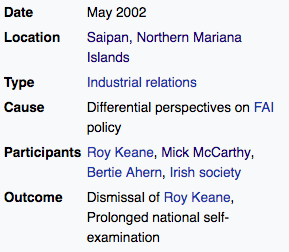 Hopefully now that the story has reached a wider international audience, we can all draw a line under it. Not bloody likely, says you.

Cork Jazz Festival will not go ahead this year

Foreign travel restrictions unlikely to be lifted next week