Westlife have announced some very special guests for their Twenty Tour.

The reunited band have confirmed two acts to support them at Croke Park on July 5th and 6th.

None other than Irish band Wild Youth will be warming crowds up before the band hit the stage, and James Arthur will perform also. 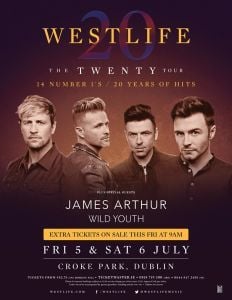 For anyone who didn't manage to get their hands on tickets to the gig, cinemas around the country will be broadcasting the concert live.

The band are set to perform brand-new music alongside their greatest hits and all 14 of their UK No.1 singles, including Uptown Girl, Flying Without Wings, You Raise Me Up and If I Let You Go.

The band have also announced their new album Spectrum will be released on September 6th.

The album is to feature new songs such as Hello My Love and Better Man.

A four-day gin festival is coming to Galway this June

The one with the reunion - Friends cast confirm reunion episode