After nearly a four-hour drive up north I finally got to the city of Derry. I parked up and checked into my accommodation before my gig that night and I was ready to get something more substantial than oat bars and cups of petrol station tea into me. I had been recommended this place by a friend originally from the walled city and after a quick creep on Pyke ‘N’ Pommes Instagram, I was sold.

The flagship eatery is actually a converted double-decker bus that sits by the edge of the River Foyle and, understandably, it's hugely popular during the summer due to its outdoor seating, location and food, of course. A quick Google Maps search when I got to Derry showed me that it was only a 15 minute walk from me but it also informed me that it closed at 6pm. My heart sank and I was hangrily looking for other options when I discovered that they had another restaurant that was a mere five minutes walk away AND it was open late! Absolute result.

Pyke ‘N’ Pommes was super busy when I arrived at about 7pm. I waited a couple of minutes for a table and had a look at their menu and specials. There was a great mix of people in the casual restaurant, from toddlers and families to adoring octogenarian couples and everything in between. My soft-spoken server told me that the specials menu is where they tend to road-test newer items before putting them on the main menu. I live for these kinds of menus.

There were some amazing BBQ items on there, from butterflied sea bass to spiced lamb tomahawks and BBQ whole mackerel with ginger, chilli and sesame dressing. My eyes were drawn to the impressive and diverse taco menu below and as time was against me, I ordered a selection of three different ones and some fried squid to start with. In my haste, I didn’t realise that the squid starter was also a taco so when four arrived I was mildly embarrassed but also secretly delighted - there’s no such thing as a bad extra taco. I was excited about this unplanned taco four-way. 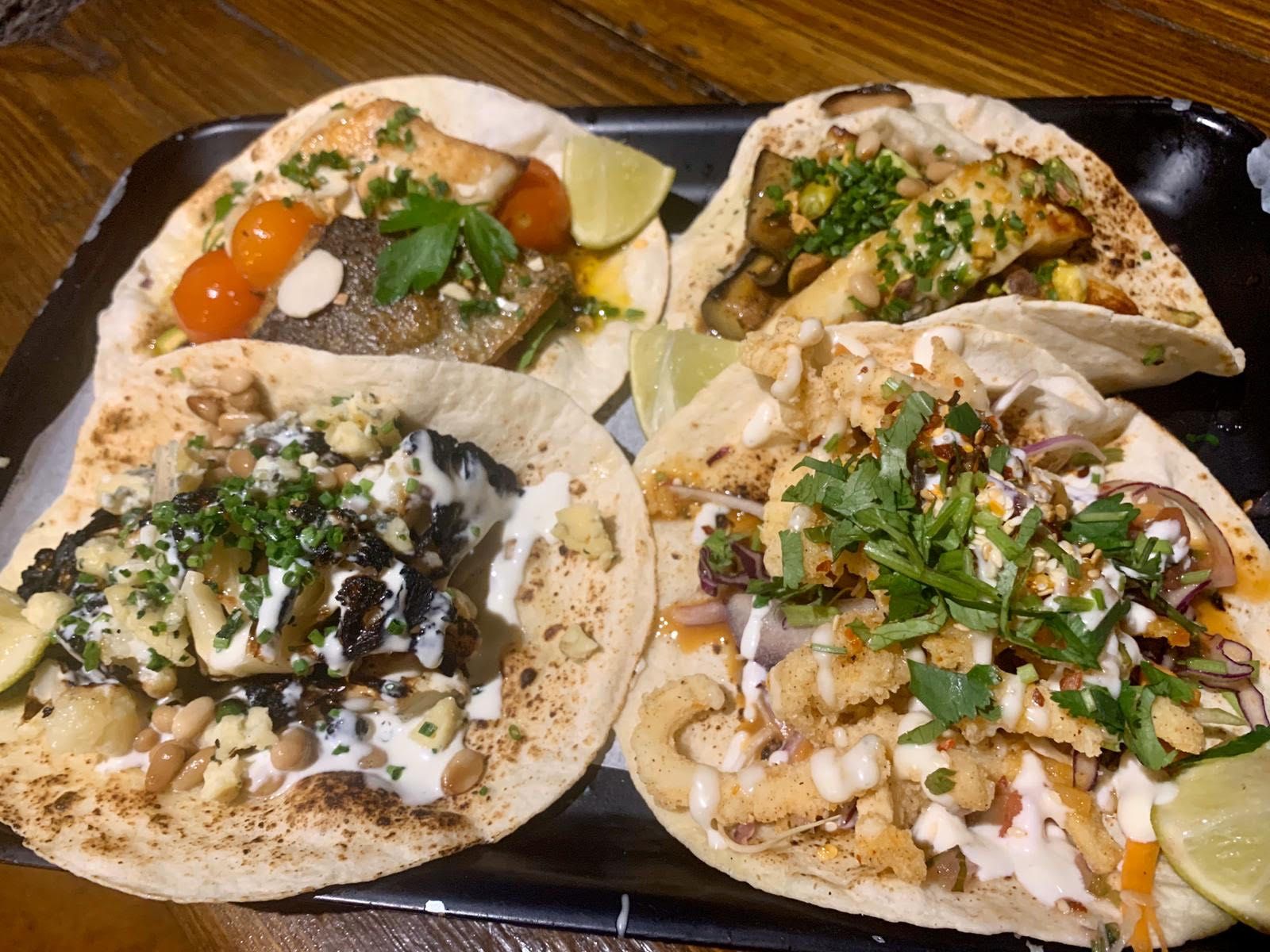 As the squid taco was technically my starter, I had that first. The squid was crisp and fresh and the pickled slaw was tangy and worked so well with the Asian peanut sauce and lime mayo. The tacos were soft, light, warm and the perfect vessel to transport all these flavours directly into your face. The burgers were flying out of the kitchen hatch fast from the hard-working yet extremely composed chefs in the shipping container kitchen, I regretted not ordering one but there was a trilogy of incredible looking tacos in front of me so the food jealousy didn't last long.

Next came the sea bass taco served with confit tomatoes, pistachio and chives - another new combination of flavours for me that worked so, so well. The sea bass was crispy-skinned and the flesh tender and flaky. The slightly tangy burst of the cherry confit tomatoes and the pistachios and chives was superb. This stood out as a favourite at that point. 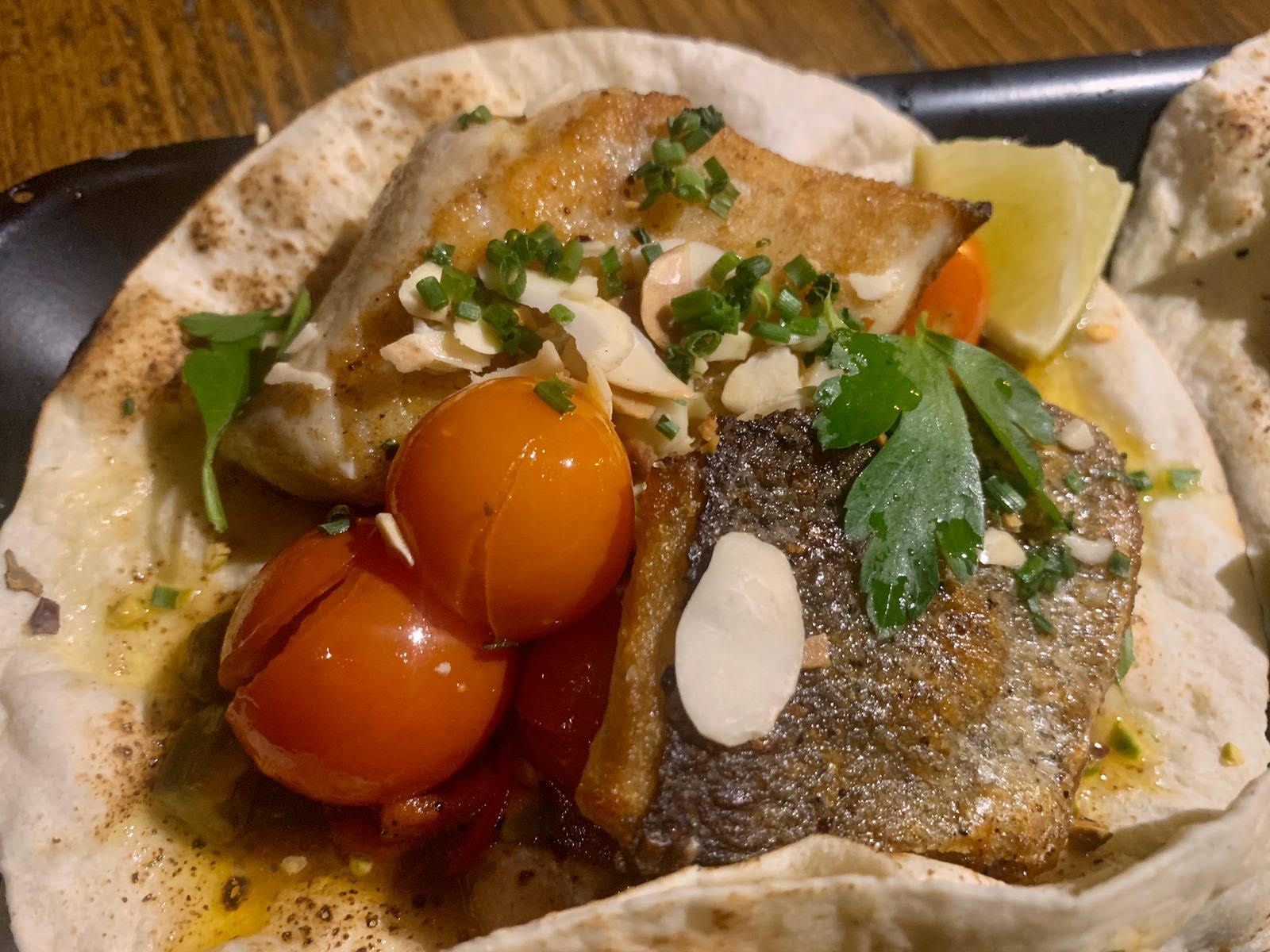 Last but by no means least was the aubergine and halloumi with burnt tomato salsa, again with some pistachios and some fresh parsley. This was essentially my ‘cheese course’ if you will. The halloumi was grilled to perfection and the aubergine was meaty. This would make a great savoury vegetarian taco option for anyone out there trying to give the meat a bit of a break.

I was absolutely stuffed but I decided to order off their small homemade dessert menu as I surely couldn’t base an opinion based solely on tacos?! I did this for you readers! My food review selflessness knows no bounds. 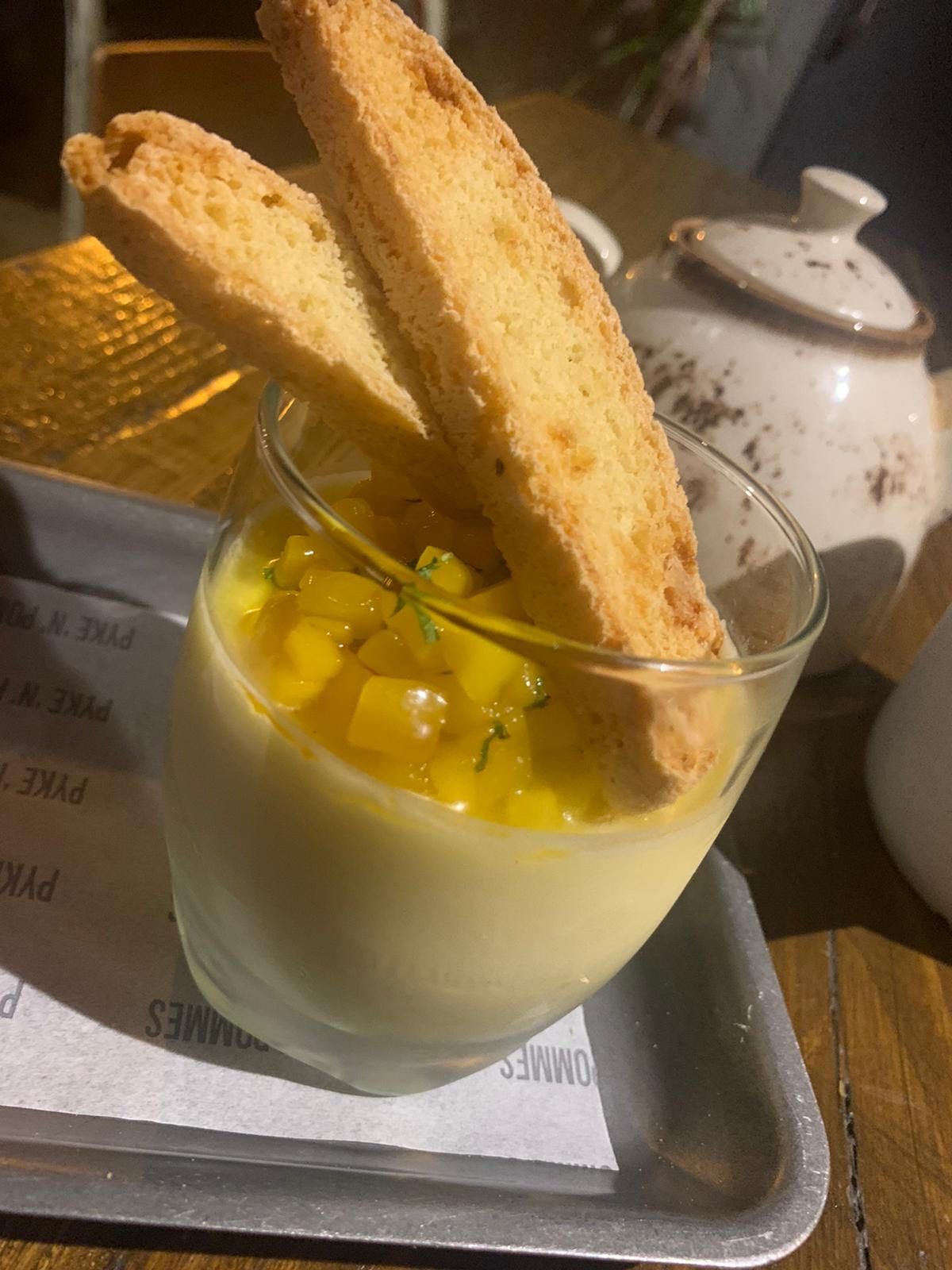 I went for the lime posset. The slightly light green custard was served with some freshly diced mango and homemade shortbread. The posset was both mouth-puckeringly sweet and tart at the same time. It was a bit overwhelming if I’m honest and I furiously sipped some water followed by tea to cleanse my pallet. If you have a sweet tooth then this is the dessert for you. For me, not so much.

I really enjoyed Pyke ‘N’ Pommes on the whole. The food was fresh and delicious with loads of great options to choose from and it was extremely affordable - I think the prices are amazing given the quality of their food. It's only been open since last April and it's the busiest place in town from what I could see in my short visit there. Each individual ingredient can be tasted in the tacos, a lot of thought and care has gone into the creation of these and they are more than just simple street food. 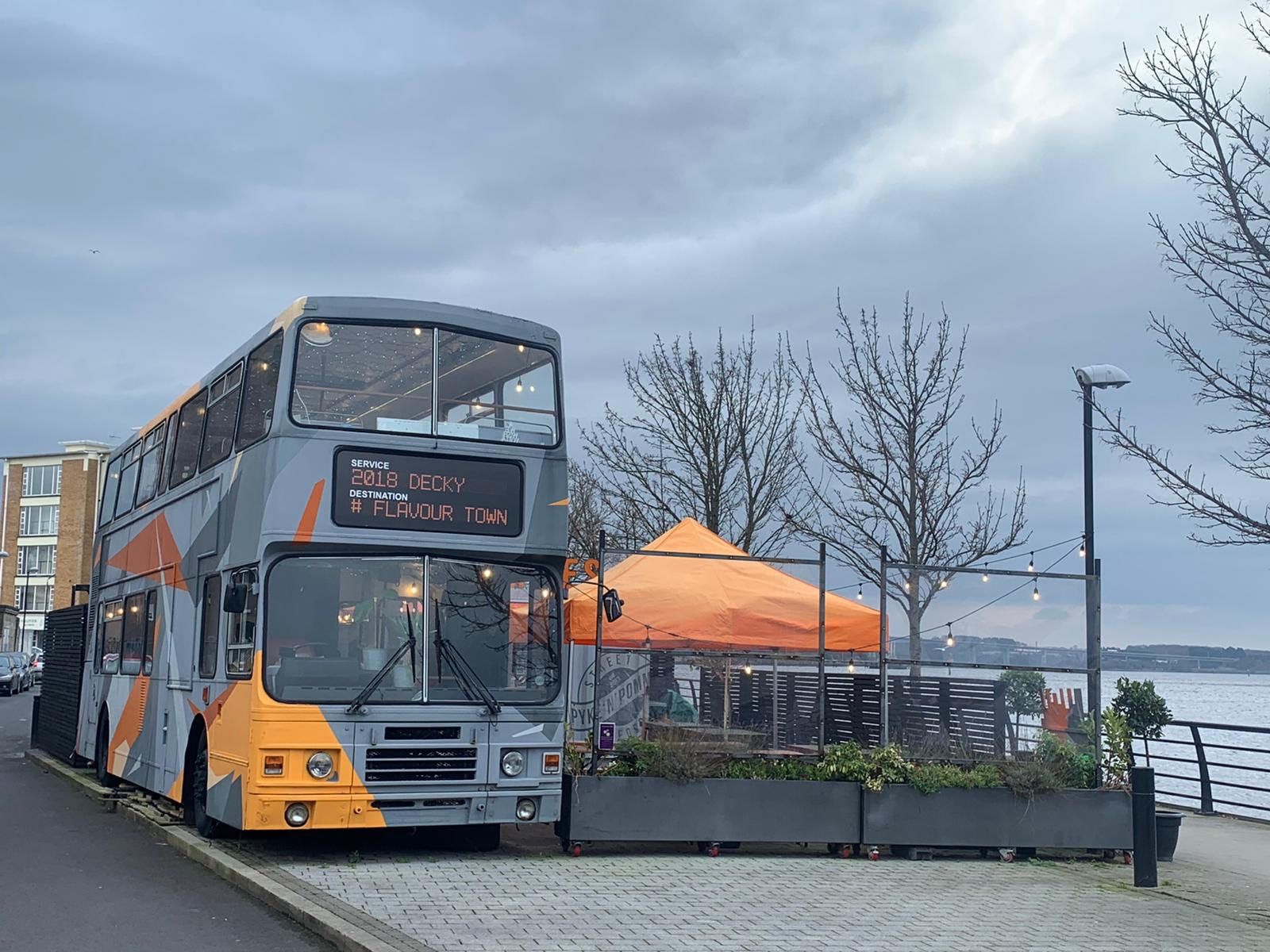 As I left Derry the following afternoon after doing a one-hour walking tour of the wall (the best walking tour I’ve ever done by the way, definitely do it if you come to Derry), I had a bleak five-hour drive right down through the middle of Ireland all the way to Portlaoise for my next gig but a happy accident in the form of a wrong exit turn at a roundabout took me past Pyke ‘N’ Pommes flagship double-decker bus by the fast-flowing River Foyle.

Storm Dennis was starting to show his teeth so fearing that I may not be able to stop anywhere decent for lunch I did a quick drive-by to try one of their burgers. There was a great selection but only one for me, their iconic ‘Legenderry Burger’. It was as perfect as a burger could be - waygu beef patty, some salad leaves, fresh thick-cut tomato with pickled onions, honey mayo and ketchup. This was one hell of a burger and was as good as anything you’d get in any of the best burger joints in the Republic. 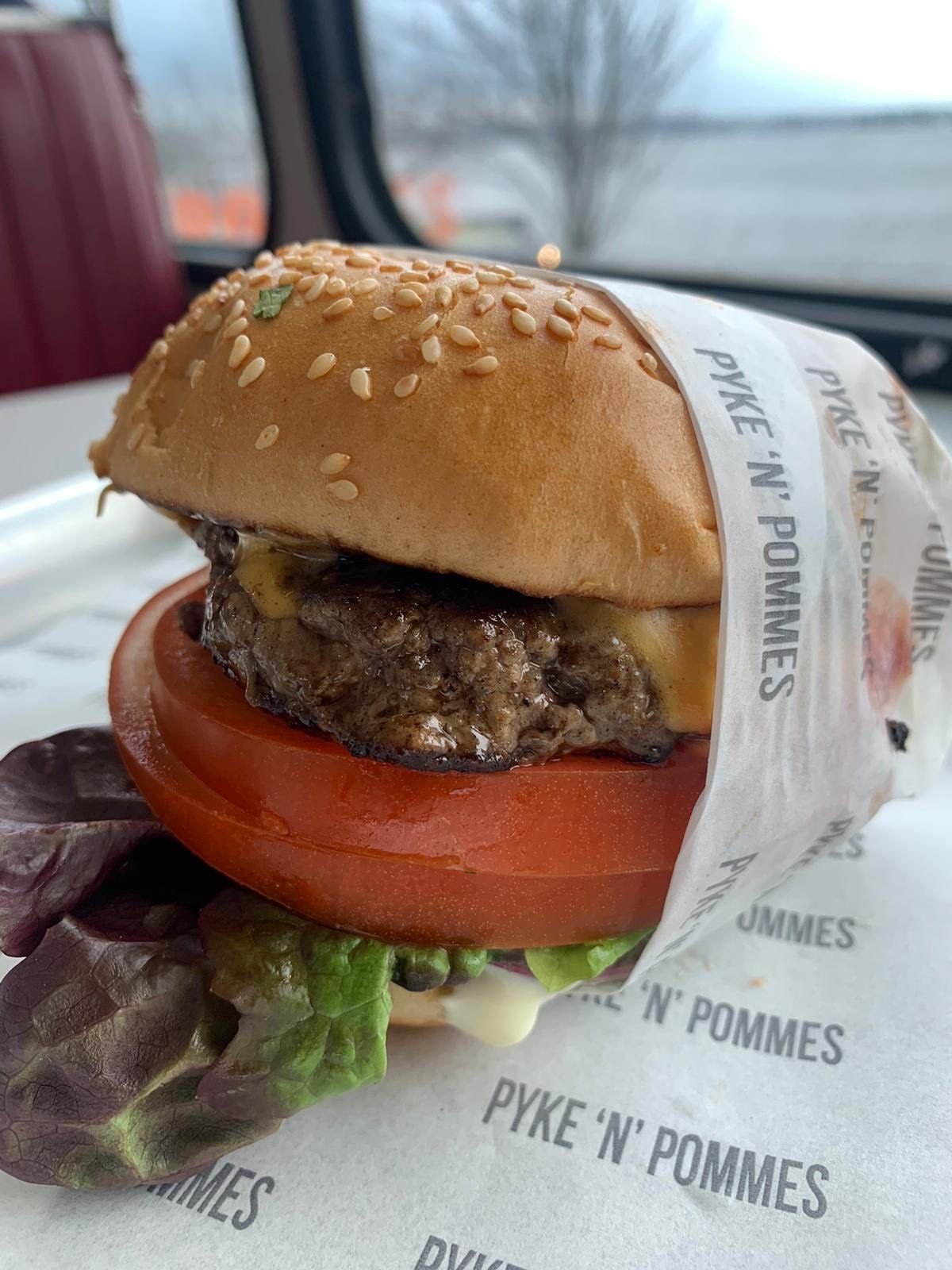 If you drop into either of the Pyke ‘N’ Pommes venues when you’re in Derry, you won’t be disappointed. The one on Strand Road would be unreal in the summer on a good day as it’s right beside the river. They sadly don’t serve alcohol on the bus but you can BYOB for a small corkage fee. The restaurant in town has loads of great alcohol options and a decent cocktail, wine and beer menu, it’s open late too. I, for one, will definitely be back again to try some other things off their menu. The staff are so helpful and great to have the chats with about all things Derry. This stunning walled city is one of the friendliest I have ever been to on this little island with some of the nicest and kindest people I’ve ever met, it’s definitely worth the drive.

McDonald's restaurants in 14 counties are now open for dine-in

Ireland's best crab claws - Where to get your fix this summer