It won't come as news to any married people, or indeed anyone planning to get married, that the cost of an Irish wedding can be pretty high.

Between the venue, the entertainment, the outfits and the gallons of wine you're apparently obligated to serve, it all adds up but fret not because WeddingsOnline.ie has unveiled the results of a new survey that should give you a fair idea of the cost of an Irish wedding.

The survey used responses from 1,400 participants and took place throughout January 2020 meaning that it's about as up to date as you can get. There are plenty of nuggets of information that may serve as an eye-opener to some or bring on a sigh of relief for others, depending on their own estimates. 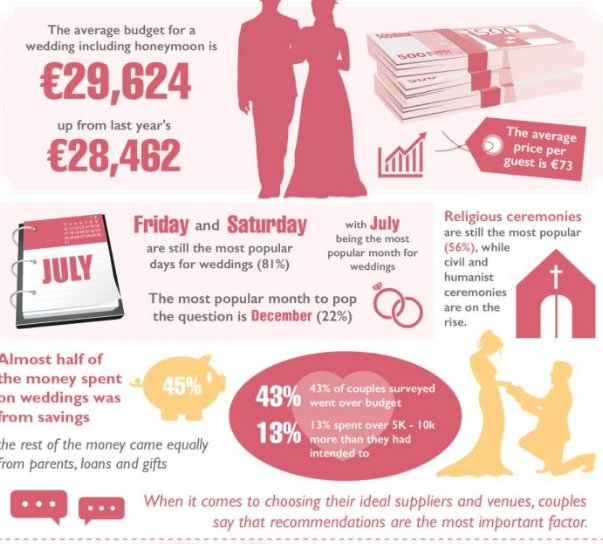 For example, the average budget for a wedding including a honeymoon is now €29,624 which is up from last year's result of €28,462. The average price for each guest is €73 so if you're humming and hawing over inviting that cousin you haven't seen in 15 years, don't feel too guilty about giving them the cold shoulder.

The largest portion of the bill seems to be spent on the venue, with the average cost of booking a place being €14,989. Hiring a band for the evening works out as €2,182 on average while a DJ will set you back €498.

Away from costs, the survey also revealed that the average age of a bride in Ireland is now 32 while grooms tend to tie the knot at the age of 34. Three bridesmaids and three groomsmen are par for the course while 162 is the average number of guests who are invited to the big day.

Perhaps the most important information of all relates to what newly-married couples would have done differently. According to the survey, these are the top answers: 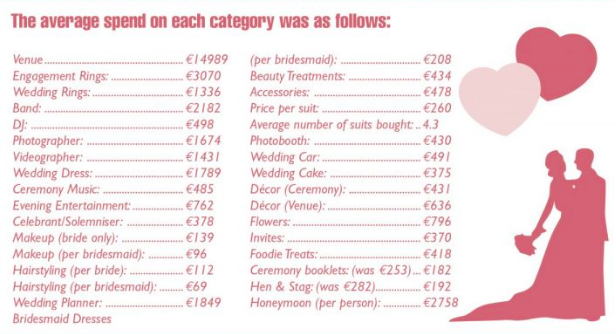 Whether you're getting married or you're just interested in seeing the cost of an Irish wedding, you can read the WeddingsOnline.ie survey in greater detail here.

WATCH: Claire Byrne outlines what to expect in pubs from next Monday