Share:
Megan: In the last few weeks, I've found myself with more time to muse on my diet, the ethics around it, and how I should be eating for optimum wellness. For a long time I've struggled with the conversation around meat-eating, veganism, and sustainability.
As someone who battles with niggling autoimmune issues, I have found that I do best on a lot of meat, a little veg, and little to no grains. This is something that feels a bit like a sordid confession. But is that fair?
The debate around veganism, meat and sustainability is becoming more divisive, and I reached out to Anthony Clavin, health and fitness coach and ex-vegetarian chef, to give voice to perhaps the 'unpopular' opinion that it really is okay and sometimes preferable to eat meat.
I value Anthony's opinion on the matter, and hope you get something from this incredibly candid interview the way I did.

Anthony: Disclaimer: I am in no way against veganism or vegetarianism!  As a small prologue to my piece, to set my credentials upon the veggie table so to speak, I, Anthony Clavin, was a vegetarian for ten whole years. A third(ish) of my life was fully dedicated to plant-based food. I was a vegetarian chef in Dublin city centre in a very reputable staple of veggie-life in the capital. I then went on to run another veggie mecca in Wicklow.

In essence I am no stranger to the diet, to the ethics and to the impact of a vegan diet.

Okay first question, and an easy one. Why did you decide to go vegan in the first place?

Quite simply... a deep love for animals and not wanting to make such a big impact on the sentient lives of other beings walking on this little planet of ours. I think that's why most people do it. I looked at my dogs and the cows and sheep in the fields around me and I thought...Why would I want to kill these amazing beings? I had an over-simplistic view of what was going on in the world and that was my answer.

What changes did you notice when you went vegan?

To say I instantly felt better or worse would be a lie. I just generally felt the same. It was only in the months to follow where I started to feel fatigued and started noticing body changes and little performance changes within the various sports I was doing. I was so sure of myself though... I knew I was doing something right and good, so I ignored the physical changes and decided to listen to all the people that told me I'd feel soon feel better, stronger, fitter, leaner. But that didn't happen.
Maybe I was doing it wrong? Maybe I was eating the wrong things? I didn't know so it was time to do various courses on nutrition and health within the vegan world. I found raw veganism and juice dieting. I started with daily wheatgrass shots, beetroot juice, turmeric, sprouts... and l started growing my own veggies too, to try and counteract pesticides. But...I was still finding it really hard to make weight before competitions, I was seeing my numbers in the gym drop, I was getting beaten in races by people I used to beat easily. So it was time. I went back to meat. And it changed my world.

Everyone is different and that's one of the main points I want to make, I have friends who thrive on a vegan diet but it just didn't suit my body.

When I went back to meat I could maintain a lean functional body easily, I went down to about 10% body fat without even trying. I could make weight for tournaments easily, and I had so much more energy for training and lifting. I didn't notice huge instant changes when I went off meat, but I for sure noticed when I went back on. 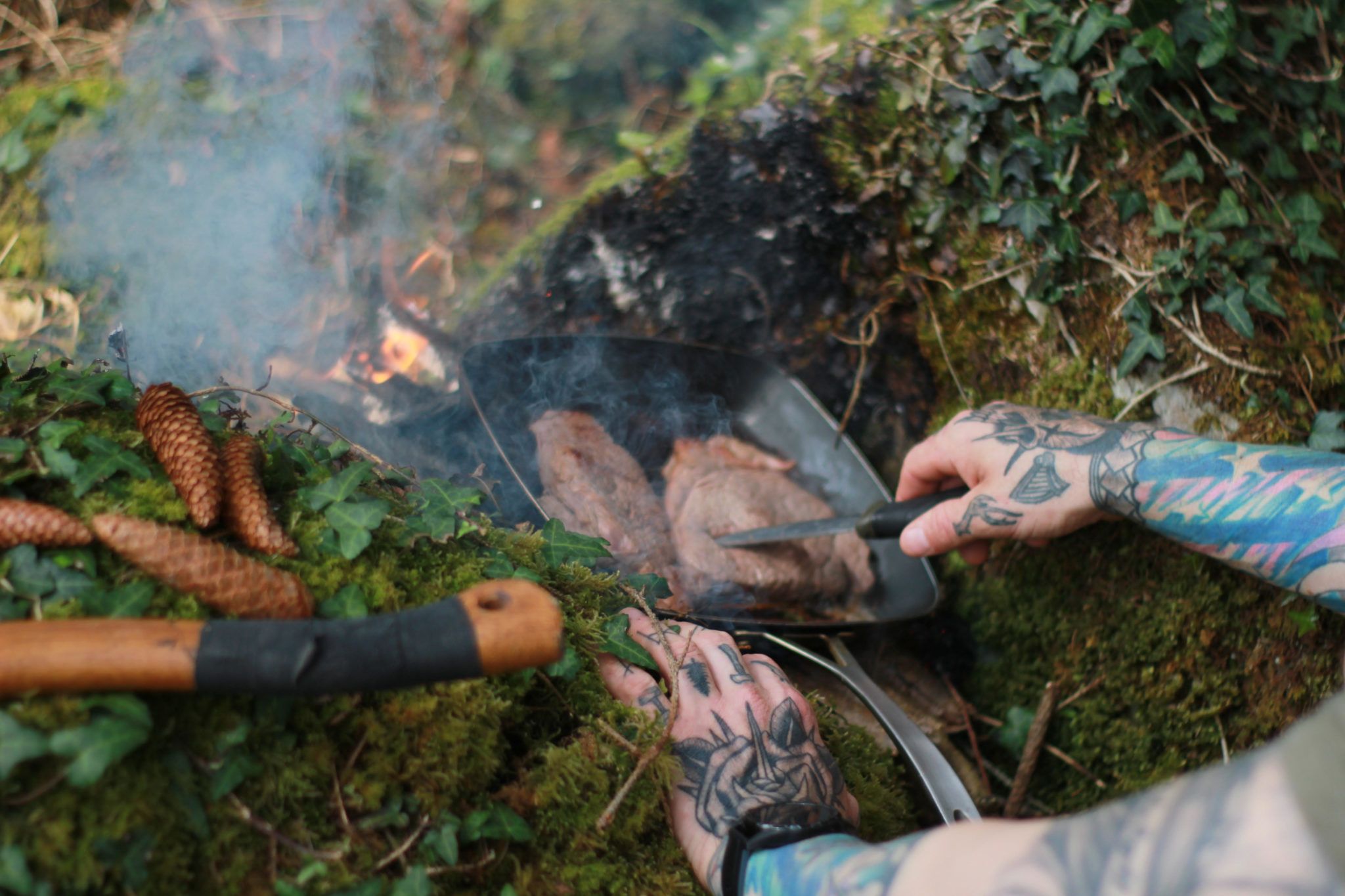 Do you ever feel people are judgemental about your decision to eat meat again? Do you have to defend it?

Oh 100% people were angry. People I didn't even know messaged me telling me how I was ruining the world with my decision. I could see their point. If you believe in species-ism and that nothing should die for our food then why wouldn't they be mad. I'd be mad. But health and well-being came first for me. I'm a serial progress tracker in my daily life and am a strength and conditioning coach so numbers mean a lot to me and if I see something being backed up by evidence then I have to think that's the way to go.

Do you think there is one perfect diet for humans?

It depends what you want from a diet. If it's fat loss then all you're looking for is a deficit and a generally healthy diet. A diet for life for me is eggs, meat, fish, veggies, fruit, some grains, nuts, seeds, plenty of water and not too many (but some) treats when you feel like it.
The thing about dieting is that people generally know what a good diet is before they even look into it. It's usually companies trying to overcomplicate things in order to sell you something that cause confusion in the diet world. Generally the meat and two veg that your great grandparents were eating is the best way.
Can I trademark that new diet? The "great grandparent diet" ..The tagline will be 'all the nutrition without any of the small pox /tuberculosis'.

What are some of the most ridiculous fad diets you've heard of?

Without a doubt the "skinny tea" fad is the craziest thing going on right now. As if something that you add to your diet could reduce calorie intake. The idea that it "binds" fat or whatever bullshit each brand tells you is just ridiculous. Nothing makes you leaner except a calorie deficit. Sorry if that bursts any bubbles but its true and anyone trying to sell you anything else is a silly person and should be ignored. Rant over...

If we take ethics out of it, do you think veganism could be a healthier option for some people?

Even though I've spent a little while bashing it I truly believe it could be. Not because its a superior diet or anything but just the fact that when people change their diets they generally concentrate on being more healthy.
It looks a bit like this: I'm feeling better (because I'm not shoving crap into myself at the moment). Maybe I'll go for a run or walk?
In that way a lot of people could benefit but comparing it to a healthy balanced diet that includes good quality meat... no I don't believe so. But it's all relative to where you start your journey.

Is there a way to eat meat sustainably?

There's a word that gets thrown around these days...Locavore. Simply put, it means eating the food that comes from your area. Limiting the amount of miles the food has to go and staying seasonal. I live in rural Galway now and I, for sure, am surrounded by a lot more animals than I am plant-based food. Sure, I get veg at my local market, whatever is in season, but I have way more options when it comes to local meat - both wild caught and farmed. So if I want an avocado, I'm afraid I'll have to do without, but if I want lamb, venison, fish or beef, I speak to the people that rared, caught or shot it.
It's far more sustainable than someone who shops in a supermarket for veg that has come from south America.

What are some of the most common misconceptions you've seen about veganism vs eating meat?

The main one is the moral high ground. Meat-eaters , however sustainable and cerebral, are thrown in with fast food eating, factory-farm supporting folk that don't care where their food comes from. Highly biased and unsubstantiated documentaries like "What the health " and "Game changers" use inaccurate and totally subjective "facts" to position meat as the bad guy, when in fact its the factory farms and huge food conglomerates that are to blame for the lack of sustainability in the food world. Evidence-based conclusions should be looked at from both sides. Fanaticism about a diet has no place in the cleaning up of our modern lives.
Be even, be evidence based and be healthy.....easy.

[Megan: This is not a sponsored piece, but Anthony is a friend, one of the smartest and most practical people I've come across when it comes to health and fitness, and he happens to own a fantastic gym in Galway that is now doing online classes. Check it out here if that's up your street.]

Conor McGregor and Dee Devlin have announced their engagement

Gardaí have set up checkpoints around the three lockdown counties