The Paddy's Day parade in Dublin is always well worth visiting. The colour, the atmosphere and the celebration of all things Irish.

Having said that, the capital does tend to be fairly jammers so it might be worth checking out similar set-ups around Ireland on a smaller scale.

Here's the best Ireland has to offer in terms of 2019 Paddy's Day parades:

This parade gets bigger every year, and there's so much more than just the main event itself.

Following the parade, the Family Fun Zone will be open around the Market Square with music, food stalls and kids fun rides all open into the evening. More information to be found here.

It all kicks off at 1pm. 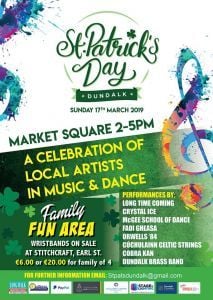 Always a good one in the sunny Southeast. More info here

All will be revealed shortly at the Wexford parade! ⁦@rtenews⁩ #Wexford #StPatricksDay pic.twitter.com/WdVkPiNEbz

The theme this year is "diversity" and the parade will feature an array of community, cultural, sporting and international groups including Ireland’s pioneering spectacle theatre company Macnas, led by the Macnas Young Ensemble.

Festivities get underway at 11am and this year there will be prizes awarded for the entrants that provide the “Most Musical & Colourful Spectacle”.

The parade takes place alongside the annual Tradfest in the city so the place is set to be crawling with craic.

Ideal for those living on the outskirts of Dublin but not arsed hitting the big smoke. The parade is scheduled to take place between 3pm and 5pm and is located ideally along the beautiful Bray seafront.

The #BrayParade starts at 3pm this afternoon. This year over 1,500 participants will take part in the parade. See you there! https://t.co/FNkDGeIoBN #StPatricksFestivalBray

The festivites go on for three days in Cork thanks to the Cork St. Patrick's Festival. Five-time Olympian and world champion race walker Rob Heffernan is the Grand Marshal of this year's Cork St. Patrick’s Day Parade.

Penneys to reopen next week

This handy image answers all your questions on Phase Two