Gardaí have issued 29 people with €100 fines for breaching the 5km travel limit since new enforcement measures were introduced on Monday.

Current Covid-19 regulations mean that people can only travel outside their 5km limit for essential reasons. Despite this, Gardaí have confirmed that three of the 29 people fined had traveled from Co. Meath to Ringsend in Dublin 'for a burger'.

In another case, a woman from Midleton in Cork was fined after she was found on a beach, shortly after Gardaí had directed her to return home. Meanwhile, a couple in Cork city were issued with a fixed payment notice for visiting a local amenity following a visit to an elderly relative. Two cyclists from separate households were also fined in Galway having travelled 19km from home.

The full details of the new fixed charge can be found below... 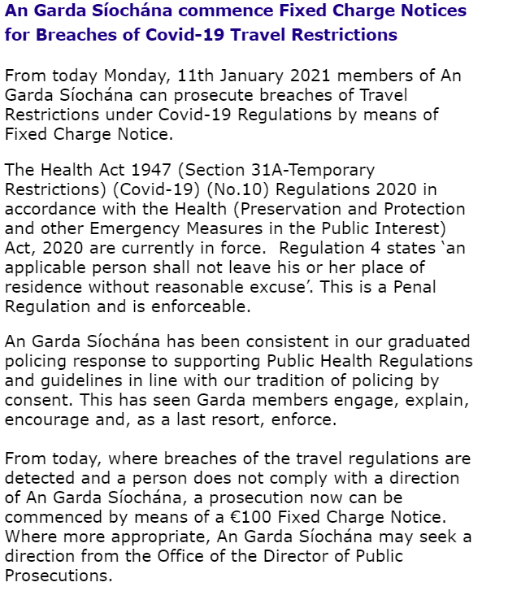 READ NEXT: An Post to lift spirits with free postcards for all Irish households

Varadkar: December decision to move from Level 5 to Level 3 was 'too quick'

These are the six best movies on TV tonight

Varadkar: December decision to move from Level 5 to Level 3 was 'too quick'

Government to make permanently working from home a legal right