Irish shoppers have been told to stay vigilant after it was revealed by a Sky News investigation that a number of ‘faux fur’ products for sale in UK High Street stores and online companies contained real fur from four animals.

Irish consumers regularly purchase online from Missguided, and House of Fraser has an outlet in Dundrum Shopping Centre in south Dublin.

House of Fraser confirmed to TheJournal.ie that the product identified by Sky News as containing fur wasn't available for sale in its Irish store.

The ISPCA have warned Irish consumers be careful when buying what they believe to be faux fur products, and to try ensure that it is not real fur passed off as fake fur.

The Missguided items containing animal fur were available online to purchase for delivery to Ireland but have since been removed from the website. 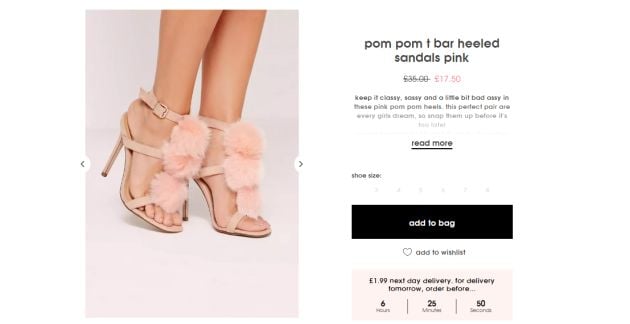 The shoes which were removed from sale following the Sky News report.Source: Google Web Cache

The Irish Competition and Consumer Protection Commission said that if a product does not match the description, a full refund should be issued to the consumer.

READ NEXT: Bus Eireann Talks Break Down With No Agreement Reached

Four gorgeous rooftop bars to soak up the sun abroad