Today is set to be the hottest day of the year with part of Ireland expected to reach over 27C. The heatwave is also set to continue into the bank holiday weekend.

The west and midlands are set to get the highest temperatures. Met Éireann said, "Today will be warm, dry and mostly sunny. Maximum temperatures will generally range between 22 and 26 degrees, higher locally in parts of the midlands and west.

"However, it will be a little cooler on eastern and southern coasts due to an onshore breeze. Winds mostly light southeast to east or variable at first will become light to moderate southeasterly, fresh later on the southwest coast." 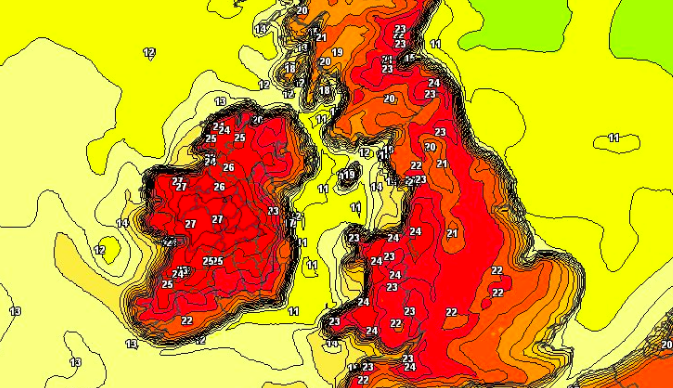 Tonight will be "dry with long clear spells and light to moderate southeasterly winds, fresh along southwest and west coasts. Minimum temperatures 10 to 14 degrees, mildest in the west and north."

And the good news continues, as Met Éireann is predicting "dry and sunny weather" for tomorrow and into the bank holiday weekend.

The national forecaster said, "Tomorrow will be dry and sunny, although the sunshine may turn a little hazy at times. Highest afternoon temperatures will range between 20 and 24 degrees in most places, but it will be slightly in southern and eastern coastal areas due to a moderate south to southeast breeze."

For Saturday, Met Éireann predicts it will be "warm in most places with highest temperatures of 21 to 25 degrees, but again it will be cooler along southern and eastern coasts due to a light to moderate easterly breeze."

On Sunday, they predict "some cloud will develop during the afternoon and evening, especially in the northwest, and may bring the odd shower. It will be warm with temperatures reaching between 21 and 25 degrees, but with an easterly breeze continuing, highest temperatures will be in the high-teens along southern and eastern coasts."

READ NEXT: Travel experts predict domestic campervan hire to take off in Ireland this summer

What time will the Perseids meteor shower be visible tonight?