27,000 people attended the charity game between Ireland XI and the Liverpool Legends back in April and Seán’s wife was presented with the proceeds this week.

Seán was given a standing ovation as he made his first public appearance at the match since he was seriously injured in an unprovoked attack outside Anfield in April 2018.

The money raised for the Seán Cox Rehabilitation Trust will go towards funding his ongoing care which he will need for the rest of his life and is expected to cost millions.

You can donate to the Seán Cox Rehabilitation Trust via their GoFundMe page here.

Seán’s wife Martina and Stephen Felle, chairman of the Rehabilitation Trust, were presented with the cheque at Anfield by the Liverpool FC’s CEO, Peter Moore. 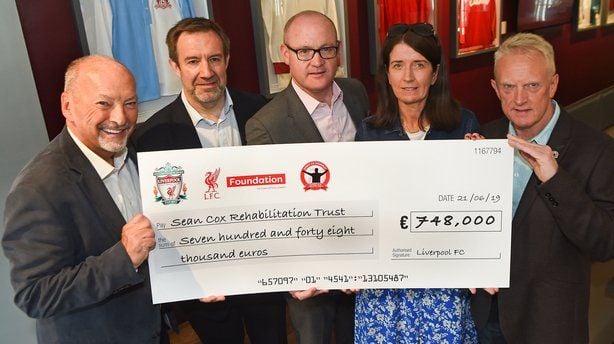 Martina said, "Today is my first ever visit to Anfield and, while it is tinged with some sadness given Seán cannot be with me, we are humbled by the warmth and generosity that has been shown by Liverpool Football Club, its supporters and the people of this city in taking Seán into their hearts.

"While the doctors are pleased with his progress, it is slow and Seán himself is frustrated at not being able to properly speak or express himself or do the things he took for granted before the attack.

"Seán begins the next stage in his rehabilitation later this summer when he will travel from Dublin to a specialist neurological centre in Yorkshire. As a family we hope and pray that we get more of the old Seán back in the years ahead.”

New guidelines put in place ahead of schools reopening this September