Met Eireann has issued a weather warning as Storm Atiyah is set to bring strong winds to Ireland this weekend.

The storm will not directly hit Ireland but according to the national forecaster, Storm Atiyah will "track between Iceland and Ireland on Sunday generating a swathe of very strong winds across the country."

As a result, an orange wind warning has been put in place for eight counties on the west coast of the country.

The wind warning is valid from 9am on Sunday, 8 December to Monday, 9 December at 6am.

A Met Eireann spokesperson said: "Southwesterly winds later veering northwesterly will reach mean speeds of 65 to 80 km/h with gusts from 110 to 130km/h. 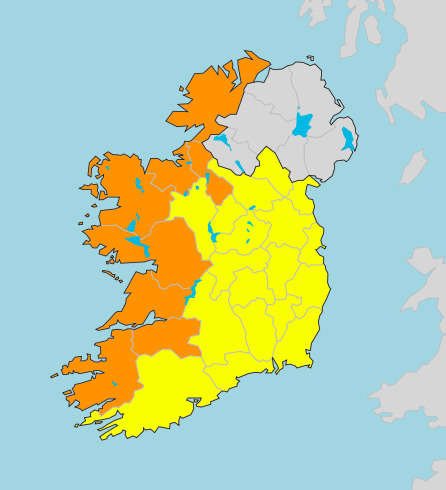 "Due to a combination of high seas and storm surge there is a possibility of coastal flooding."

While the west is expected to be the worst affected, a yellow wind warning has also been put in place for other parts of Ireland.

The yellow warning, which is valid from Sunday at 3pm to Monday at 6am, has been issued for all of Leinster, Cavan, Monaghan, Roscommon, Cork, Tipperary and Waterford.

Snow forecast this weekend as temperatures set to plummet

Low temperature and ice warning issued for 17 counties this weekend