A west coast gem that Connell and Marianne were mad to leave... Normal People may be fiction but even still, what were they thinking?!

Sligo is only a stone's throw away from where I grew up in Longford and yet it's a part of the country that I've never really explored. Sure, I've been there a handful of times but usually only for a couple of hours at a time and always only to Strandhill Beach (if it ain't broke don't fix it and all that). This time I ventured a little further afield with my family- a stop off at Strandhill was still on the cards, but I also managed to cross a few more things off the Sligo bucket list including surfing, kayaking and a quick hike up Knocknarea.

Some might say that this year has been a bit of a write-off, but if there's one positive to take away from the past few months it's seeing people rediscover their grá for Ireland. I can't tell you just how happy it makes me... it's a little like hearing your friend gush about the book/series/movie you recommended to them ages ago - pride mixed with a smidgeon of 'I told you so'.

With much of the country busy planning weekend getaways and staycations, some of the less 'popular' destinations can often fall somewhat under the radar but Sligo is well worth your consideration. Not only is it the birthplace of Normal People, but it's also home to some of the west coast's most gorgeous beaches, cafes and country walks.

One thing I've learned throughout all of this newfound Éire abú love is that there's a certain sense of unity that comes from sharing staycation tips - bonding over favourite local eateries and swimming spots, and telling friends and neighbours that they absolutely must call into XYZ before leaving. It's comparable to being given access to an old family album whose pages are filled with the best memories - treasured information that only the special few are privy to.

Below you'll find my Sligo album so to speak, so peruse at your leisure and then go forth and adventure.

Perched right along the seafront in Strandhill, Shells is a staple on the Sligo foodie scene - as well-known (and loved) with locals as it is blow-ins. Extremely popular you'll be lucky to get a table here but time it just right and it's the perfect spot to take in that good sea air.

Breakie by the sea 💕

A modern take on a traditional pub, inside is kitted out with loads of cute little snugs - all social distancing friendly. Great food, decent prices and friendly staff.

I went for the vegan risotto, which, upon ordering, the waiter asked if I would like made with real cheese and butter instead. I, of course, said yes, and would recommend you do the same (unless, you know, dietary requirements prevent you from doing otherwise). It was so good that I even forgot to snap a photo first... so unlike me.

Let the below convince you in its place.

Right beside Shells Café, this place is a must whether the sun shines or not. Ice-cream is always a good idea and I refuse for anyone to tell me otherwise. Combine it with a cuppa from Shells (that way you have both hot and cold covered) and you're onto a winner. Top flavour recommendations include the honeycomb, kinder bueno and oreo. 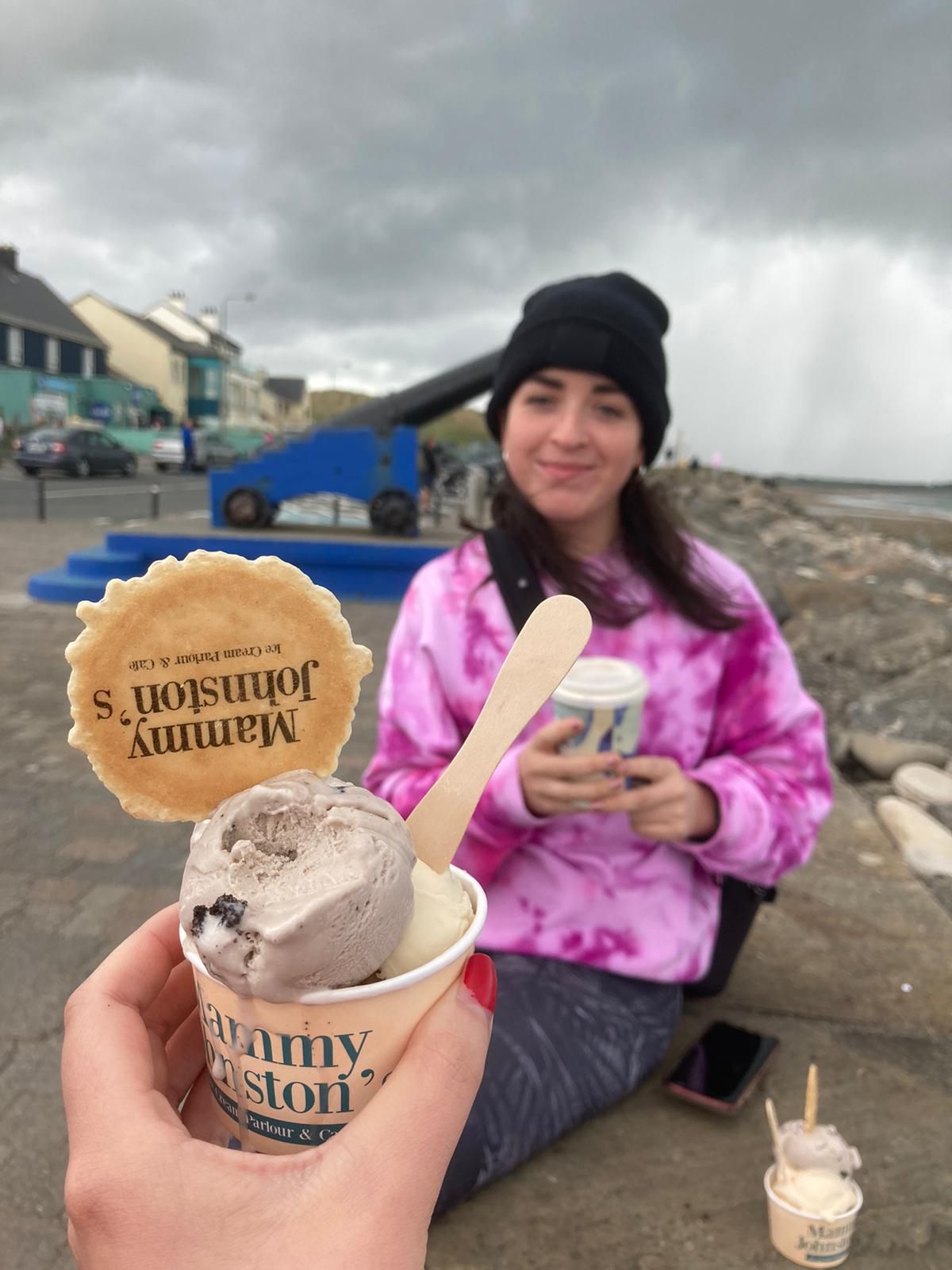 Two places that came highly recommended but that I sadly didn't get a chance to call into are Baker Boys and Sweet Beat. Shells' sister café, I've heard many wondrous things about Baker Boys since it opened last year while Sweet Beat is a plant-based café in Sligo town that serves up coffee, vegan bakes and plenty of other tasty grub. What's that? A reason to return (*insert winky face emoji here*).

The beaches in Sligo are arguably some of the country's finest - think gently rolling dunes, gorgeous soft sand and icy cold water that will put hair on your chest and fire in your belly. People always think we're mad for wanting to hop into Irish waters but sea swimmers know that there's something extremely healing about ignoring that little voice in your head that says 'nah' and submerging yourself before giving it a second thought.

Some prefer to ease their way in slowly but this rarely works in my experience... the more time you have to mull over whether you really want to go in or not, the less likely you are to actually follow through. Bite the bullet and just sprint straight in. Once the initial shock subsides, it's actually quite nice. Promise. 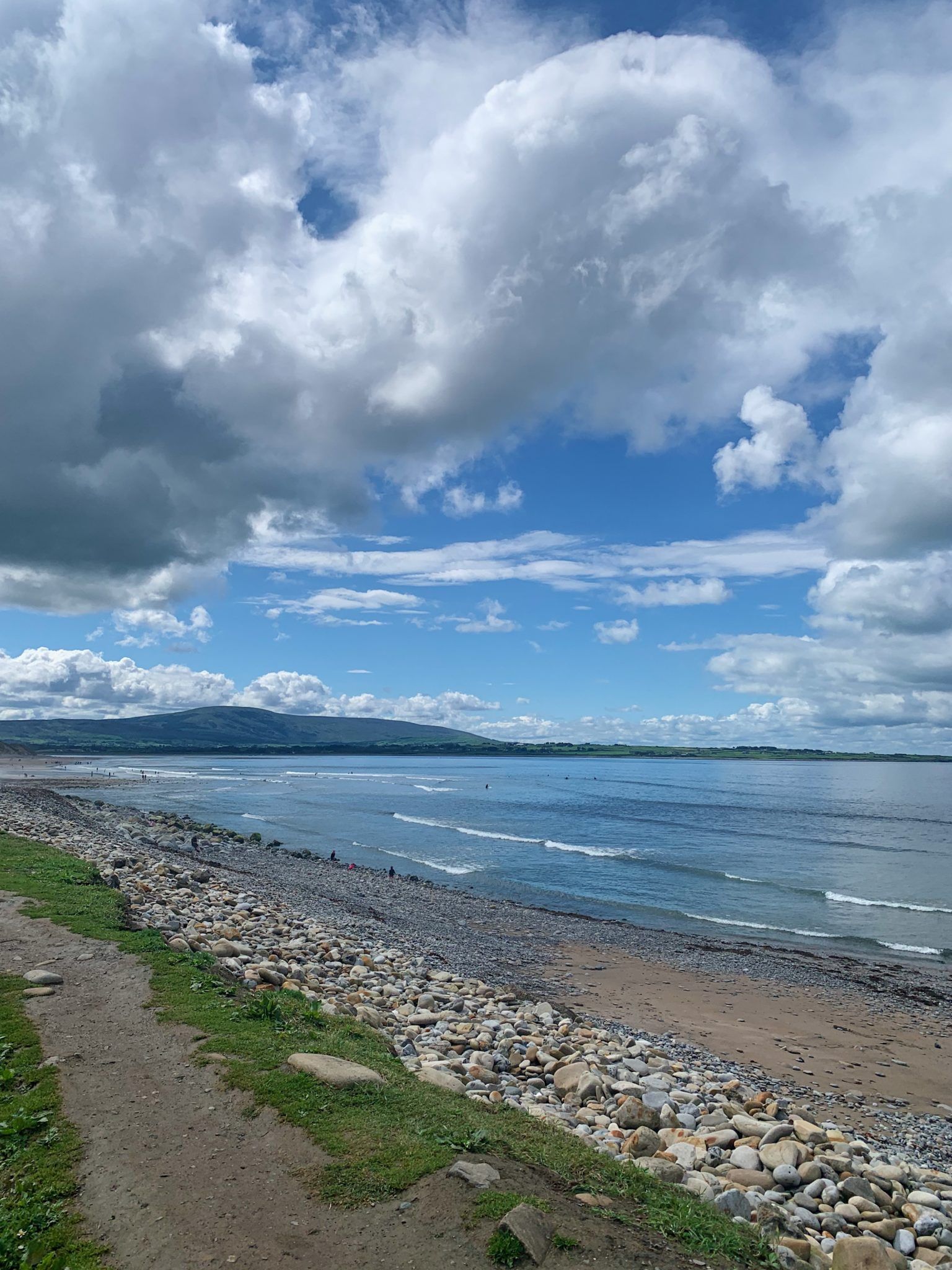 There are several spots worth checking out when in Sligo but special mention goes to Rosses Point and Streedagh which is the beach where Normal People was filmed. There's also a gorgeous secret rock pool near Mullaghmore that is perfect for a dip at high tide. Located out of the village along the coast road just search for Bishop's Pool and you should find it easily enough. Quite rocky though so be prepared for a few war wounds... particularly if it's wavy.

Surfing and Sligo go hand in hand and there are any number of surf schools that you could go with should you fancy shredding the gnar (a snowboarding phrase that also applies to surfing, or so I've been told). We went with Sligo Surf Experience who take customers out at Strandhill Beach. While not a swimming beach (swimming is strictly prohibited due to the strong rip current), Strandhill is ideal for surfing and a quick lesson from owner Seamus McGoldrick will have you ready to take on the waves. 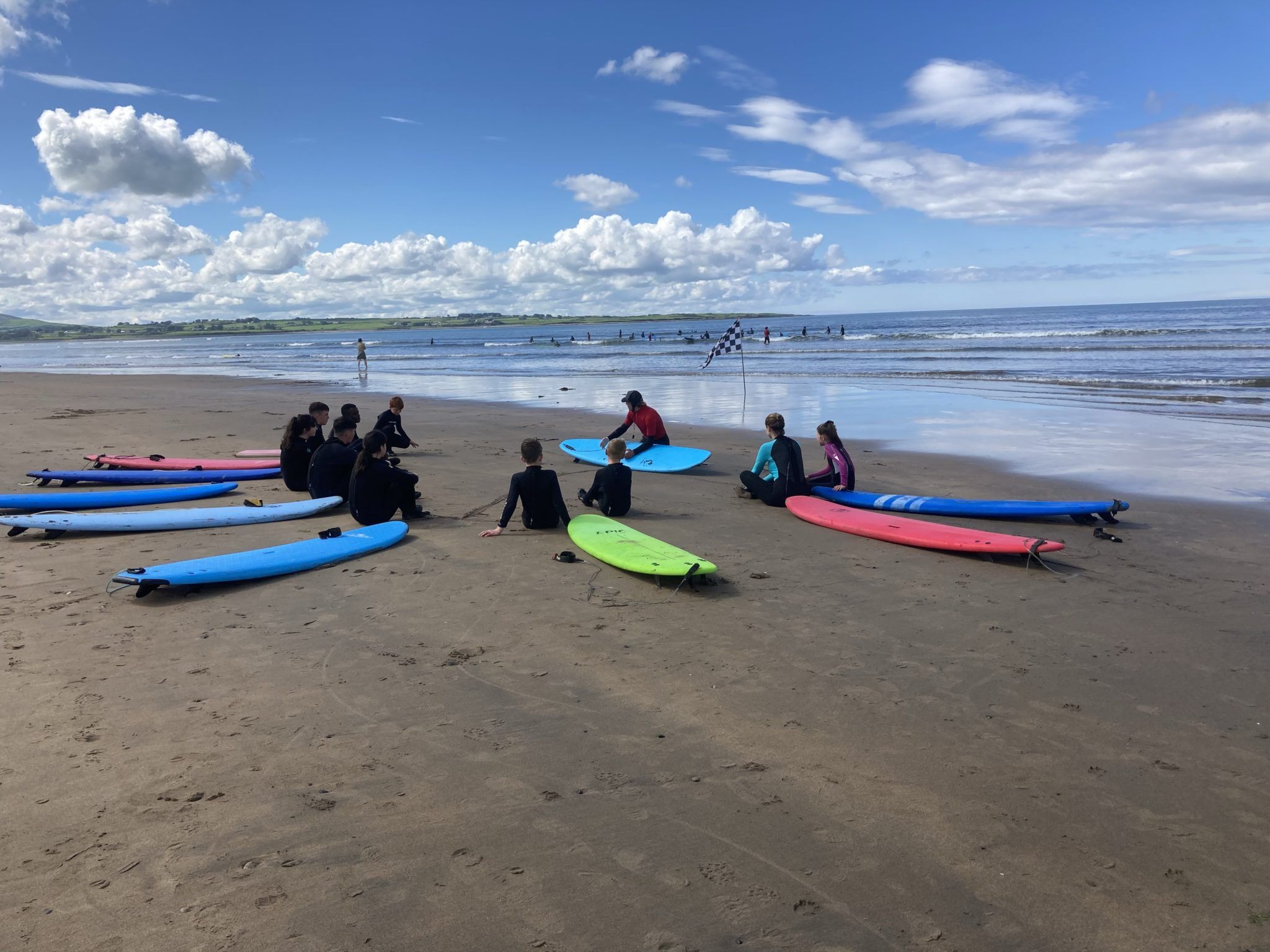 Harder than it looks but very fun and they provide all the equipment so no need to worry about that.

This one is a must-do if you're in any way fond of the water. Run by owner Barry Mottershead, Sligo Kayak Tours is a small, locally-operated business that is all about sustainable tourism. My family and I booked in for a three-hour guided tour of Lough Gill which, in classic Finnan style, we managed to perfectly time with the arrival of Storm Ellen. Thankfully we got in just before things got bad so it wasn't too choppy but be warned; it's one hell of an arm workout. 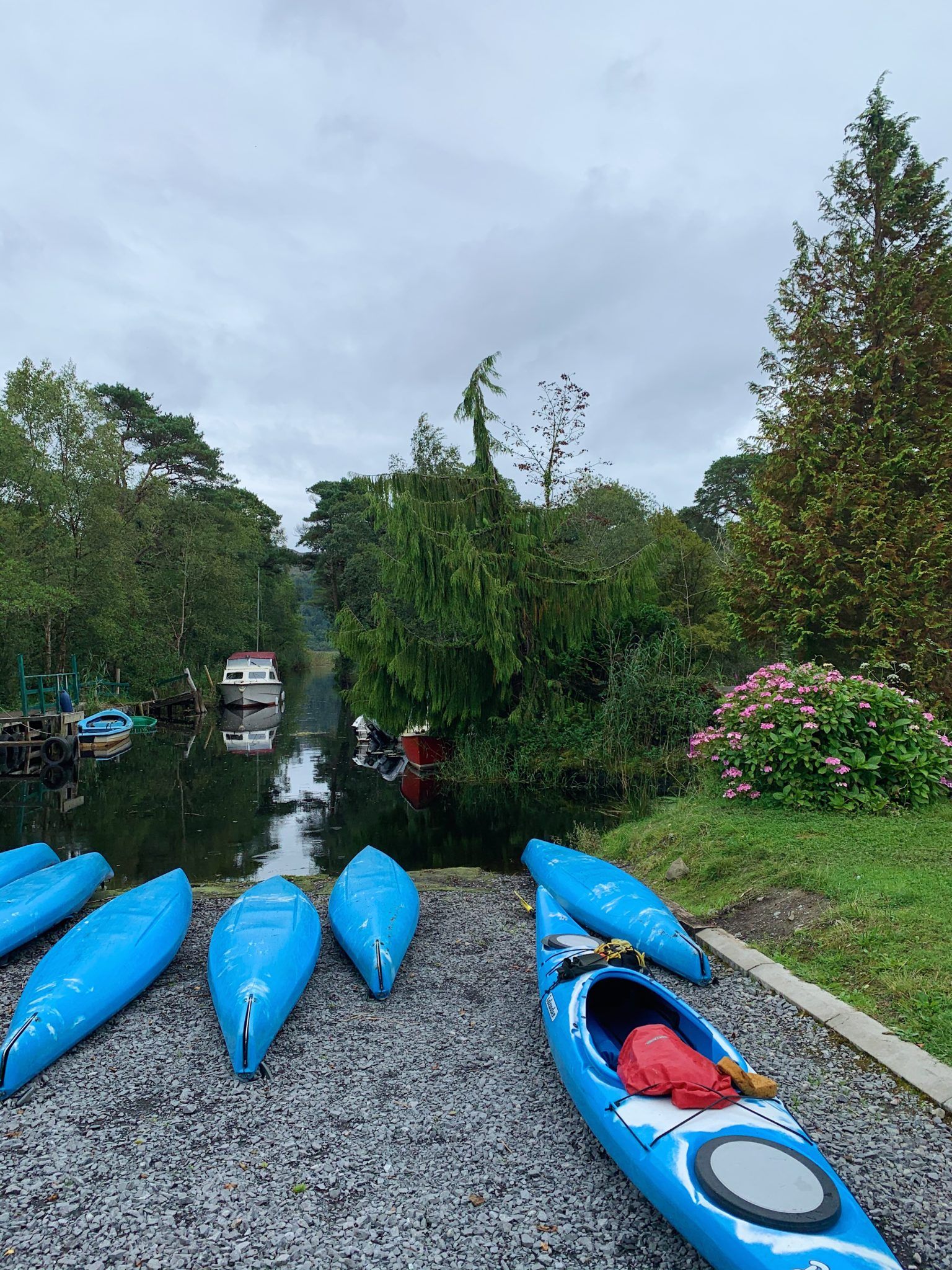 Each person is in charge of operating their own kayak (you can opt for a two-person kayak - a more stable option for those slightly less confident on the water) and your guides take you all along the lake, even stopping off for a quick tea break in Hazelwood Forest along the way.

The Knocknarea walk is actually a relatively easy walk... if you get the weather for it. If you don't, it's a little tricker as, though short, the trail is very exposed to the elements and the wind can be more of a hindrance than a help. Just over 2.5km to the summit Cairn, it's also known as being the resting place of Queen Medb (or Maeve) - the Warrior Queen of Connacht.

I know the saying is 'do it for the gram' but I say do it for the views because they're spectacular. Just look at those blue skies. 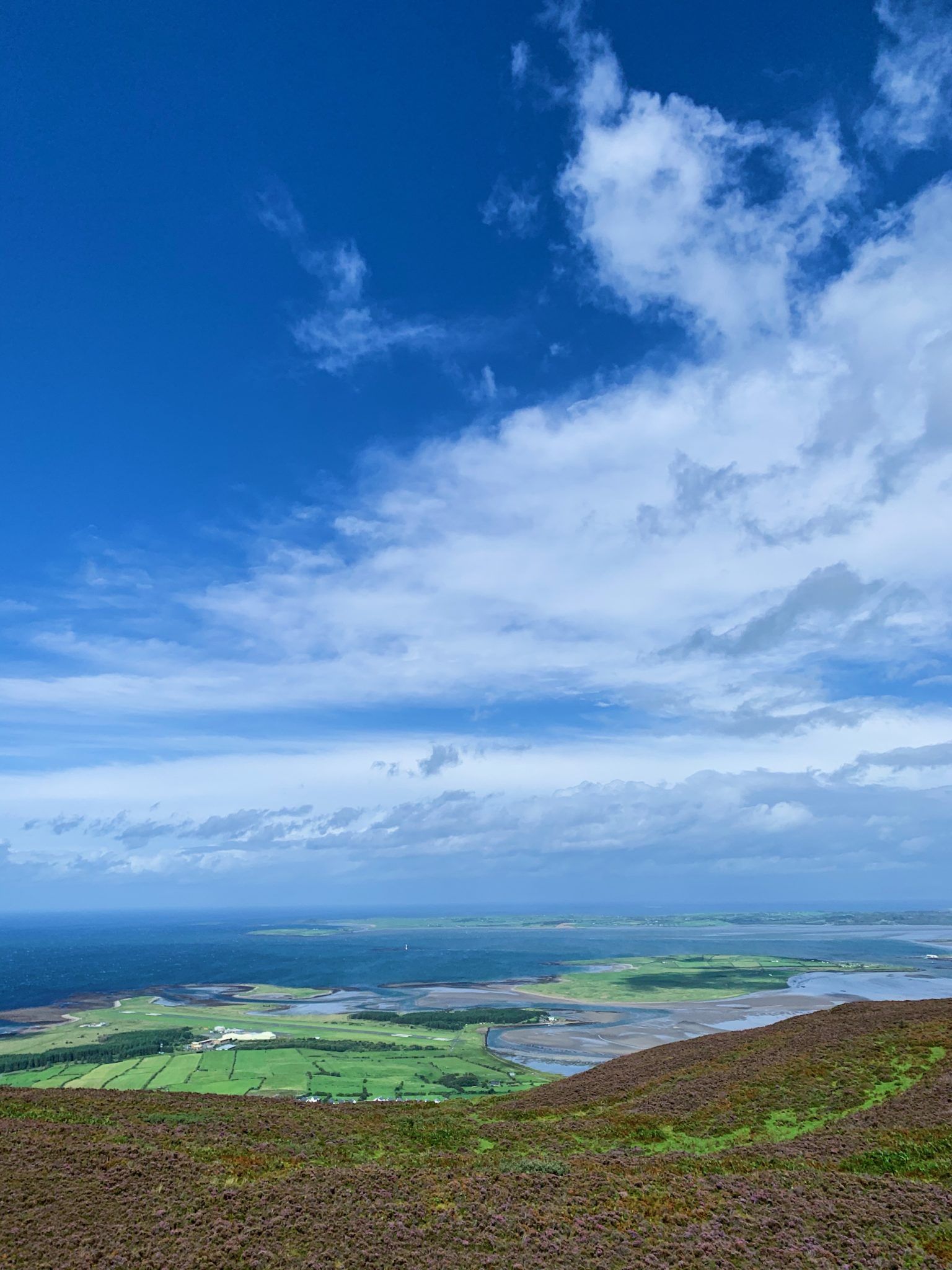 Sisterhood of the travelling tie-dye

Sligo tourism have loads of different offers running over on their site at the min so definitely give them a once over if you plan on heading west anytime soon. In the meantime please do share any other Sligo secrets with me so I know what to prioritise on my next visit.

May we always remember just how gorge our little island is.

READ NEXT: One of Sligo’s finest is back open for sit-in brunch service

CONFIRMED: The Government have announced Level 5 restrictions for a duration of six weeks