Trailhead: Brogan Carroll Bothy, where there is free parking.

In your mind’s eye, I want you to conjure an image of a vast, tranquil green expanse that can be found in Ireland’s unspoiled wilderness – that’s the sight you’ll behold when you embark on the Bothy Loop in Co Mayo.

In the area surrounding County Mayo’s majestic Nephin Beg Mountain range lies the Wild Nephin Ballycroy National Park, a place once referred to as “the very loneliest place in this country” by naturalist Robert Praeger.

The third largest of Ireland’s six National Parks, this is the place to escape to when it’s time to go truly off-grid and get back to nature.

We chose the shorter of the three - The Bothy Loop – a six-kilometre trail which only takes about 90 minutes to complete, during which time you’ll pass over boggy ground, across stony streams, and along forested roads.

The Bothy Loop is most easily reached from Newport. When leaving the town, take the N49 towards Achill but turn right after 1km when you see the sign for Letterkeen Loops. After a 12km journey, you’ll find the trailhead at Robert Lloyd Praegar (which is a basic shelter for walkers) in Letterkeen Woods, where you can park up. The car journey from Newport should only take about 20 minutes, making the Bothy Loop easily accessible.

A word to the wise – Ballycroy National park is a whopping 15,000 hectares in size, so if you are using the Visitor Centre as a base, be aware that it is roughly a 40 minute drive to the trailhead.

You will drive up tiny country roads to what seems like the most remote place in Ireland, if you feel like you should turn back – don’t worry, you’re on the right track and the carpark will soon materialise in front of you like an oasis in the desert! 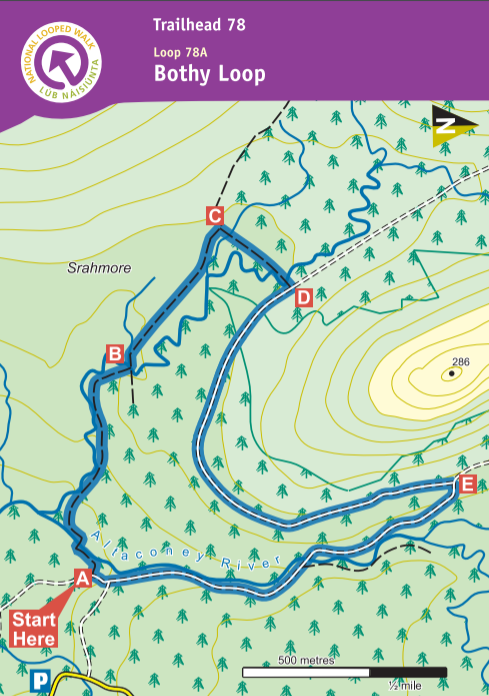 If you are parked nearby the Brogan Carroll Bothy, (a small stone hut that’s clearly signposted) you are in the right spot, as this is where the trail begins and ends.

You will be following the blue arrows, and the path is well signposted complete with occasional time estimates for travellers, so there’s no fear of actually getting lost while you lose yourself in the wilderness.

With as much as 2000mm of rainfall per year, the predominant habitat here is the active Atlantic blanket bog so make sure you have your hardy hiking boots on before you head off!

Beware - approximately two minutes into the walk you will come to the end of the wooden decking (you’ll pass a picnic table) and from here it’s just you and the natural terrain (here’s where those boots come in handy!)

Once you’ve stepped off this decking, you’re greeted by a beautiful, unspoiled expanse of wildlife, with the Altaconey river bubbling alongside you, and the Nephin Beg slopes rising up before you.

You just step off the decking and follow the Altaconey river for just over 1km, taking you over a metal “humpback bridge”. The path winds in and around the slopes, meaning you never know what you’ll see just around the corner.

After the humpback bridge, you’ll traverse an old cattle road for another kilometre or so before breaking away from the red and purple loops and walking along sandy roadway for almost 2km until you re-join the other loops.

Continuing to follow the blue arrows, you’ll arrive back at the Altaconey River for the last 2km of the trail.

As you follow the tracks along the banks of the river you may stumble upon a fox or a badger as this area is home to a wide range of wildlife – so keep your eyes peeled!

The Wild Nephin Ballycroy National Park is also home to the Mayo Dark Sky Park, Ireland’s first gold -tiered International Dark Sky Park, showcasing some of the darkest, most pristine skies in the world. A Gold Tier award is the highest possible accolade, meaning that Mayo is now internationally recognised as one of the best places in the world to view the wonders of the night. As a beginner to stargazing, choose a clear night around the new moon to see over 4,500 stars, planets, the Milky Way and if you are lucky even meteor showers.

The Brogan Carroll Bothy has actually been chosen as one of three designated viewing points for the Dark Sky Park , so the trailhead is the perfect place to crack open your flask of tea after an exhilarating walk and look skywards. 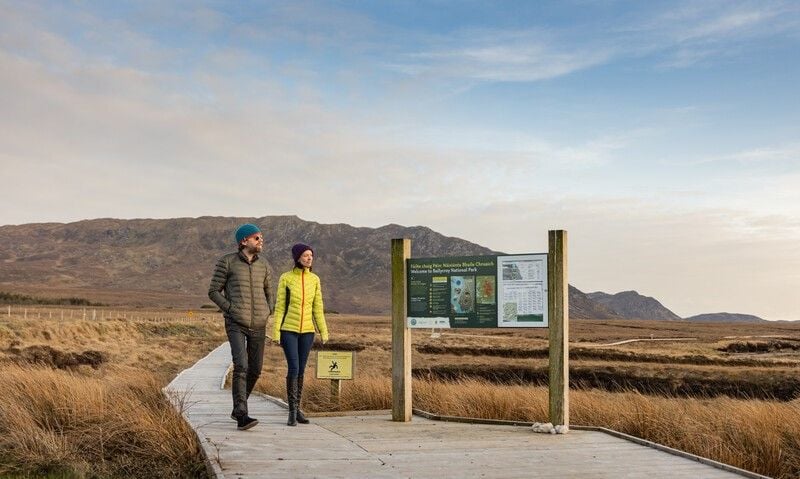 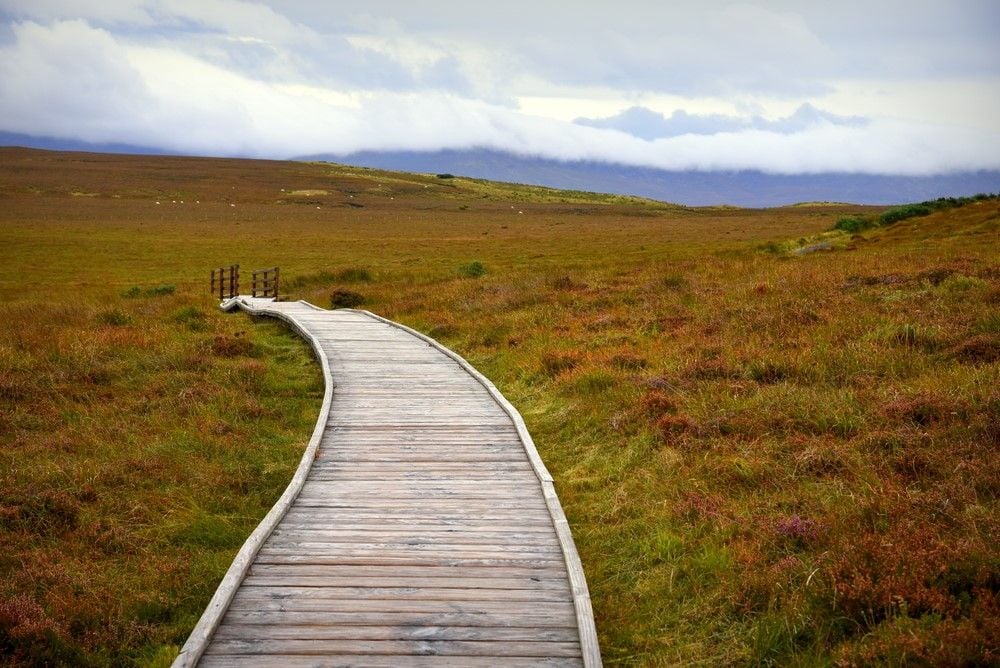 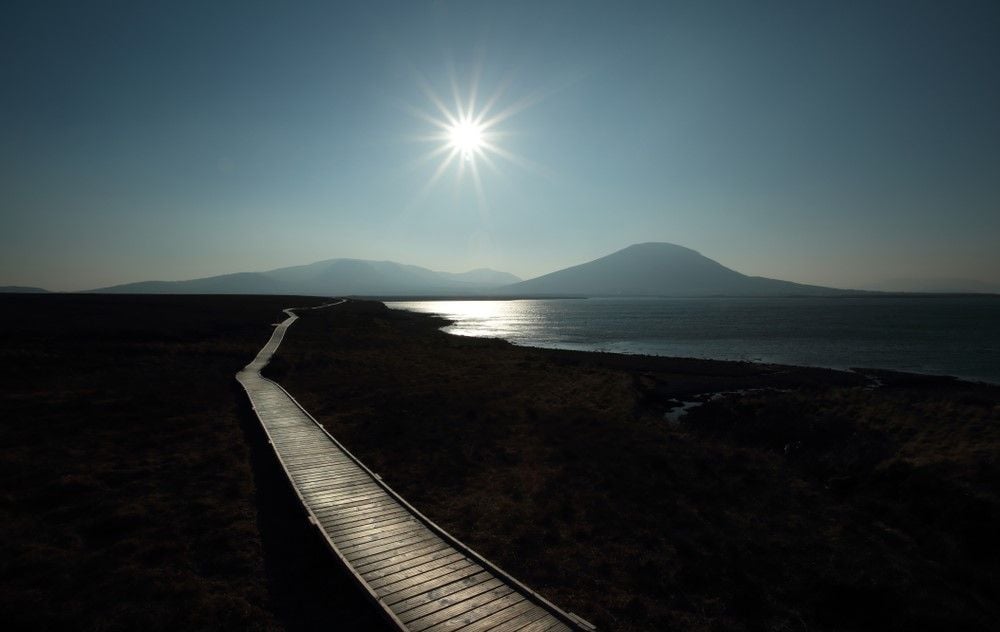 If you’re looking for convenience and proximity to the walking trail, go for Hotel Newport. Found in the heart of the town, you can expect great deals, friendly staff and comfortable rooms in this spot.

If you’d prefer something a little more luxurious, choose the Great National Mulranny Park Hotel. Located on the Great Western Greenway and affording an excellent view of Croagh Patrick, the four-star hotel is an ideal base for an active break away. The beautiful Mulranny Beach is only a stone’s throw away from here too, making the location even more perfect.

A post shared by GNMulrannyParkHotel (@mulrannyparkhotel) on Jul 9, 2015 at 4:03am PDT

Newport: This small heritage town is a great spot to set up base during your short break for its dining and accommodation options. Check out Newport Harbour for its excellent fishing, the Great Western Greenway if you’re in the mood for a cycle, or scratch your cultural itch by admiring the town’s striking 19th-century sandstone viaduct.

Mulranny: This small town also has plenty of places to stay and eat, as well as easy access to the lovely Great Western Greenway. There’s plenty more to enjoy too, such as sea kayaking, surfing, sea angling and panoramic views over Clew Bay.

Westport: This one’s a little further away from the Bothy Loop, but it’s still an excellent place to stay. The locals in this picturesque town warmly embrace the holidaymakers who flock to the area. While you’re here be sure to check out the Mall, a beautiful tree-lined boulevard built on the Carrowbeg River.

While you’re in the vicinity, pay a visit to the idyllic Achill Island. Connected to the mainland by bridge, this destination is home to spectacular sights like the lowest corrie lake in Ireland, the fascinating Deserted Village and Blue Flag beaches awash in the crashing waves of the Atlantic.

A post shared by GNMulrannyParkHotel (@mulrannyparkhotel) on Jul 9, 2015 at 4:03am PDT

Make your break away even more active with a cycle along the Great Western Greenway. From historical towns to stunning bays, this 42km traffic-free trail allows you to see the very best that the Wild Atlantic Way has to offer.

On my way to @run_killarney Half Marathon, this time by bus, a slightly different set up as it was for Achill Half Marathon.⁣ This will be my third race for my @runtoplanttrees fundraiser, link in bio to support.⁣ - - -⁣⁣ 🌧The day before Achill Half we got on a bus with our bikes and headed out to Castlebar, it was a drizzly morning, much like today. My fiancé and I didn’t feel great, and we knew if we say it out loud, we will stay at home.⁣⁣ 🚴‍♀️We arrived in Castlebar, got on our bikes took a road to Newport to then join the Great Western Greenway, which partially followed the old railway line all the way out to Achill Sound.⁣⁣ It’s a stunning cycle, particularly from Newport to Mulranny. Plus, it’s always a pleasure to cycle and enjoy the views instead of worrying about the cars. We had a stunning lunch spot down by the river a bit after Newport. We took our time with the cycle, been meaning to do it for a while now. Weather treated as nicely in the end, and we had an ice cream stop in Mulranny. It was an absolute joy to cycle to Achill Sound, with sheep roaming freely and stunning views all around.⁣⁣ Arrived in Achill, fuelled up and realised that the next 14 km to Keel we have to cycle on the 80 km/h road beside the cars. At that point we had cycled 51 km. Eyes on the road and off we went.⁣⁣ ⛰A tough cycle and mainly uphill, but got to see a part of the half marathon route. I never expected that Achill will be so green and covered in trees, it made my heart sing! Never mind the cars passing in full speed and tired legs, look at the trees. 🤩⁣⁣ 🌊We left the bags in the hotel and cycled to Keel beach to pick up my race number and jump in the waves. And oh my, what a joy it was, it completely wiped away any tiredness and fatigue and I felt so refreshed and full of energy. Always grateful to the ocean.⁣⁣ 🐏By the end of the day we had done 74 km, it was time to rest and get ready to run the next day.⁣⁣ I was wrecked, though I still felt better than I did in the morning. With sheep choir outside it was time for sleep.⁣⁣ - - -⁣⁣ Run to Plant Trees is working closely together with Hometree charity to reforest the West Coast of Ireland with native Irish trees

Be sure to check out the Ceide Fields Visitor Centre where, with the aid of audio-visual presentations and exhibitions, you can immerse yourself in the geology, archaeology, botany and wildlife of Mayo. The pyramid-shaped building is part limestone, part peat-clad, with a glazed lantern apex, so it’s a sight worth seeing in itself.

Located in a 17th century stone building in the centre of Newport, the Blue Bicycle Café is a charming spot to refuel after a morning spent exerting yourself. Whether you’re looking for a hearty feed or a light treat, you’ll find something delish on this menu.

For lunch with a view, it has to be family-run Ginger & Wild Café in Wild Nephin Ballycroy National Park Visitor Centre in the village of Ballycroy. From the seating area you’ll be able to view Achill Island and the Nephin Beg mountains, while enjoying a selection of refreshments, like teas, coffees, fruit juices, vegetable soups, paninis, quiches, scones and more, all made from locally sourced ingredients.

Named after Ireland’s infamous Pirate Queen, the Gráinne Uaile is a family-owned pub situated in Newport which overlooks Clew Bay. Its welcoming atmosphere and trad music sessions have been such a draw over the years that even celebrities like Bono and Prince Albert II of Monaco have dropped in.

For spectacular sights, invigorating sensations and unforgettable experiences, make your next short break a walking break on the Wild Atlantic Way. Before you go, make sure you check out our 10 Genuinely Useful Tips For Going Hiking In Ireland to ensure you have a safe and enjoyable walk.

It’s always important to be respectful of the wildlife and surrounding environment, so make sure to leave the trail as you found it. Visit leavenotraceireland.org for more information.

Young woman explains her experience with racism in Ireland

Here's how to whip up a gorgeous salmon roast for two

How to make a mouth-watering Easter roast using Irish beef

10 best areas to look for property in Galway