Trailhead: Tooreen Trailhead where there is a carpark and a café.

For such a small island, Ireland is full of nooks and crannies just waiting for the curious to discover during a short break – for example, the Sheep’s Head Lighthouse Loop on the Wild Atlantic Way.

Found in West Cork between Bantry Bay and Dunmanus Bay at the tip of a narrow peninsula, Sheeps’s Head at 5km wide and 19km long, is so far out into the Atlantic that you can expect your walk to be windy, wild and utterly refreshing. Sheep’s Head Peninsula is a lattice work of walks and trails, with a wide variety of distances and terrains to suit anyone’s level of walking experience. Think breathtaking bays, sprawling headlands, sweeping cliffs and you’ve got a pretty good idea of what to expect.

Perhaps the best of these options for a walking break is the Sheep’s Head Lighthouse Loop.

To be honest, this neck of the woods has pretty much everything: buzzing towns, iconic sites, jaw-dropping natural wonders, and pristine beaches, as well as enough arts, culture, and history to make you want to stay even longer… and why not?!

You’ll want to make a proper break out of your trip to the Sheep’s Head Lighthouse Loop and spend a few days soaking up the good life in West Cork.

You’ll need about two hours to complete this trail, during which time you’ll traverse steep, rocky paths and witness foaming waves crash upon jagged rocks and stark cliffs. It’s a weather-worn landscape, with little more than sparse patches of gorse and heather growing.

The first thing you’ll see when you arrive at the start point at Tooreen trailhead is Bernie’s Cupan Tae – a cafe that has been dubbed ‘the tea shop at the end of the world.’ It’s perched in a spacious carpark complete with toilet facilities at the end of a winding drive with majestic views of the rolling mountains on either side of you.

Shortly after you set off, you’ll come to the incredibly picturesque Lough Akeen on your right, a great place for a pitstop to admire the views.

The walk towards the lighthouse is largely downhill from here. It’s a rocky one and some areas of the path are single track, so watch your step!

As you continue walking near the cliff’s edge on your way to the lighthouse, you’ll be afforded phenomenal views of the Beara Peninsula. It’s a sensory delight and promises to be one of the most overwhelmingly beautiful sightseeing experiences that Ireland has to offer.

As you near the tip of the Peninsula, Sheep’s Head Lighthouse materialises ahead of you, with a long flight of steps taking you down to the lighthouse itself.

Just before you arrive at the lighthouse, you’ll see a stone circle laid out among a flat patch of grass – not a trace of ancient or magical past, but a make-shift helipad!

Built in 1968, the lighthouse required all building materials to be sourced locally in Kilcrohane, and they were transported via helicopter due to the peninsula’s remoteness: the road stops where your walk begins.

Don’t let the lighthouse’s small size fool you – this diminutive outpost has been successfully steering enormous freighters away from the hazards of this coastline since the 1960s. Once you reach the lighthouse, you can climb its concrete steps to get a really sensational view of Mizen Head to the south.

If you’re lucky, I mean really lucky, when you finally reach the tip of the peninsula you may be rewarded with a glimpse of a basking whale out at sea. In recent years, the waters around the southern coast of the Wild Atlantic Way have seen the seasonal arrival of all manner of marine life, so much so that there are now several tours you can do to go dolphin and whale watching.

After taking a long break and breathing in the expansive ocean views, you’ll return via the north coast of the Sheep’s Head.

From here, your route gets a little wilder with narrow paths overlooking sheer cliffs.

As you walk, you’ll take in views across to Bere Island and Bantry Bay once again with the Caha Mountains visible on a clear day over on the Beara peninsula. Turning your back on the peninsula’s tip, you head inland.

While the journey towards the lighthouse was downhill and easy-going, here’s where you can really work up a sweat as you ascend back towards Bernie's Cupán Tae to enjoy a slice of her legendary apple pie as you take in the last of this looped walk’s spectacular views of Dunmanus Bay.

When it comes time to retire, rest your weary head in Seamount B&B in Bantry. This farmhouse affords stunning views of the nearby bay and the mountains of the Wild Atlantic Way. Known for serving up hearty breakfasts, this is exactly the kind of refuge you need on a walking holiday. The owner is also a walking guide, so you know who to turn to if you need any local insights.

For something a little plusher, go with the Maritime Hotel Bantry. Luxuriate with a dip in their 19-metre pool or an indulgent treatment in their YouTime Spa Treatment Rooms.

Make your whole break a delight for the senses.

The remoteness of Sheep’s Head is part of its unique appeal, yet finding the Sheep’s Head Lighthouse Loop is actually surprisingly easy. Leaving Bantry, take the N71 toward Blackrock Lane. Follow the signs for Kilcrohane, then pass through that village and continue as far as you can on the peninsula until you reach the car park at Tooreen, where you’ll find the start and finish point of the loop. From here, the way to the lighthouse at the tip of the headland is clearly signposted. 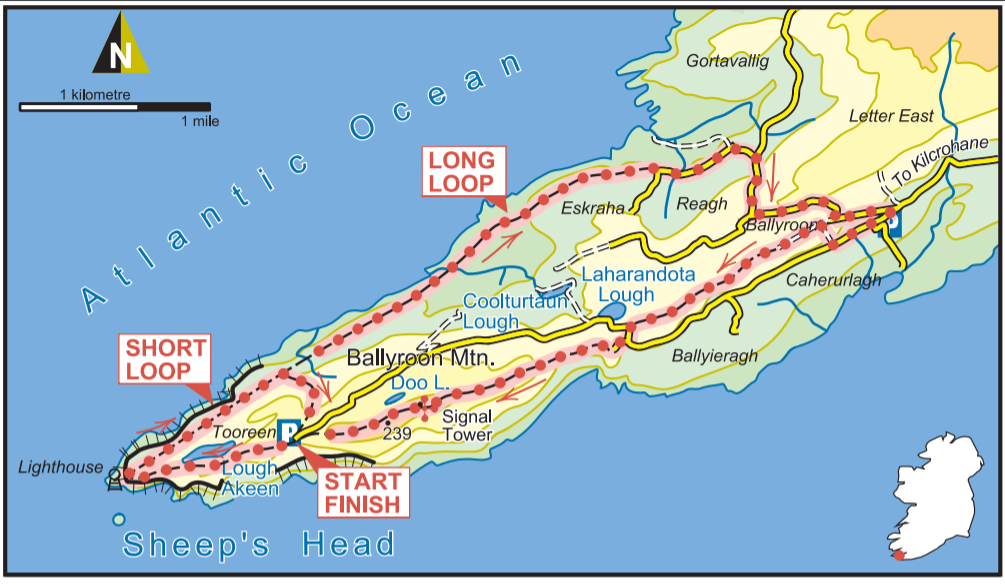 While you’re in this neck of the woods, be sure to stop by the Bantry House & Gardens. Overlooking Bantry Bay, this stately home houses a private collection of furniture and works of art. Home to the White family since 1739, this opulent estate offers a fascinating insight into how the gentry once lived.

I thought I’d share a bit of Ireland this week leading up to St Patrick’s Day on the 17th. 🍀☘️🍀 This photo from our visit last summer to Bantry House and Gardens along the southern coast. Adding to the atmosphere was music coming from just behind those doors where a chamber orchestra was practicing for a concert there in the evening. 🎵#Ireland #bantryhouseandgardens #visitireland #greenireland #countryhouse #garden #irishgarden

To pick up something to commemorate your visit to the Sheep’s Head Peninsula, pop into Dunbeacon Pottery. In this shop, you can peruse beautiful tableware that was handcrafted by a professional potter and inspired by the surrounding landscape. It’s a lovely way to bring a little piece of the Wild Atlantic Way home with you.

To fuel up immediately after your exhilarating walk, Bernie’s Cupán Tae café is conveniently placed right at the trailhead. Serving up simple fare like scones, apple tart and salmon sandwiches, Bernie’s is a firm favourite among visitors and locals.

For a more substantial feed, we recommend a stop at The Old Creamery in Kilcrohane. A popular spot among walkers, this family-run eatery serves hearty dishes of local meat, fish and produce. And if you’d like to pick up some knickknacks after your feast, the creamery building is also home to the Sheep’s Head Producers’ Market and Shop, where you’ll have the chance to pick up some crafts made by talented local artisans.

If you really love your seafood, you need to pop into The Fish Kitchen in Bantry.

This family-run business prides itself on serving up the very best in locally sourced fish, providing their diners with dishes that are fresh, simple and high in quality.

I mean, come on. Do oat crusted fish cakes on tossed leaves with lime and coriander mayo sound good to you? How about steamed Bantry Bay mussels in a white wine sauce?! They taste as good as they sound.

After a tiring day of battling the elements on Sheep’s Head Peninsula, you’ve earned yourself a drink in Arundels by the Pier in Ahakista. This seaside pub has the warm cosiness you’ll surely be longing for after your exertions and they serve up bar food which focuses on well-made classic recipes. On a sunny day, there’s nothing finer than sitting in their outdoor seating area, overlooking Kitchen Cove, and taking in those stunning sea views.

Heaven on a Sunny day in West Cork topped off with a stop @arundelsbythepier . . Life don’t get much better than this 👌🏼 . . #westcork #wildatlanticway #lovelife #sunseeker #sunshine #wildatlanticway #hiddenireland

If you’re in the mood for an evening of cosy drinks, we’d recommend giving The Snug in Bantry a go.

Run by couple Maurice and Colette O’Donovan, the very name of this pub perfectly encapsulates just how comfortable, warm and welcoming the place is.

It’s like being invited into a really hospitable home.

For spectacular sights, invigorating sensations and unforgettable experiences, make your next short break a walking break on the Wild Atlantic Way. Before you go, make sure you check out our 10 Genuinely Useful Tips For Going Hiking In Ireland to ensure you have a safe and enjoyable walk.

It’s always important to be respectful of the wildlife and surrounding environment, so make sure to leave the trail as you found it. Visit leavenotraceireland.org for more information.

Make a break for it in Athlone: 10 incredible experiences around this wonderful town

Make a break for it in Kerry: best things to do in the Kingdom

WIN: A Titanic staycation in Belfast

11 best experiences to have in Wexford