There's a lot of football to be played before we start worrying about Ireland at Euro 2020.

The Republic of Ireland still need to qualify for next summer's tournament and will need to first beat Slovakia as well as the winners of the Bosnia vs. Northern Ireland to progress from their four-team play-off.

Consecutive victories for Mick McCarthy's men will see Ireland guaranteed a place in Euro 2020 and should they qualify, they already know what group they would land in.

The draw for Euro 2020 was made in Bucharest on Saturday night, when each team learned of their opponents in the group stages. 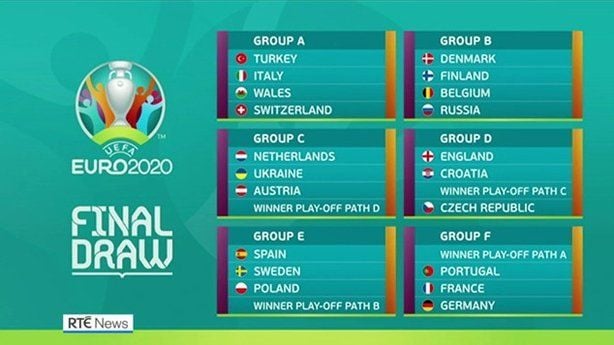 If they qualify, Ireland will look forward to clashes with Spain, Poland and Sweden in Group E.

If Ireland do make it to Euro 2020, Irish supporters will welcome the news that two of the group games will take place in Dublin's Aviva Stadium.

The Boys in Green would play at home against Poland on Monday, 15 June and then against Sweden on Friday, 19 June while they would have to travel to Bilbao to play Spain on Wednesday, 24 June.

While there are plenty of 'ifs' to deal with before Irish fans should go booking tickets, we will all keep our fingers crossed for back-to-back wins against our play-off opponents.