Ireland's fixtures for the inaugural Autumn Nations Cup have been revealed, with Andy Farrell's men due to take on Wales in their opening game at the Aviva Stadium.

The Autumn Nations Cup takes the place of the traditional Autumn Internationals, with visitors from far-flung places like New Zealand and South Africa faced with Covid-19 travel restrictions. Instead, the Autumn Nations Cup will be played by the usual Six Nations plus Georgia and Fiji.

It has now been confirmed that the competition will kick off with a clash between Ireland and Wales at the Aviva Stadium on Friday, November 13. Both sides will make up part of Group A along with England and Georgia, with France, Scotland, Italy and Fiji making up Group B.

After playing in England Twickenham (November 21) and Georgia at the Aviva (November 29), Ireland will then head into the Finals Weekend in which each country will play against the team the corresponds to their final position in the opposite group. Basically if we win the pool, we play the winner of the other pool and if we come second we play our fellow runners-up. You get the picture, right?

Whatever the case, we're guaranteed a home fixture at the Aviva Stadium for Finals Weekend on December 5 and you can check out the Autumn Nations Cup fixtures in full below... 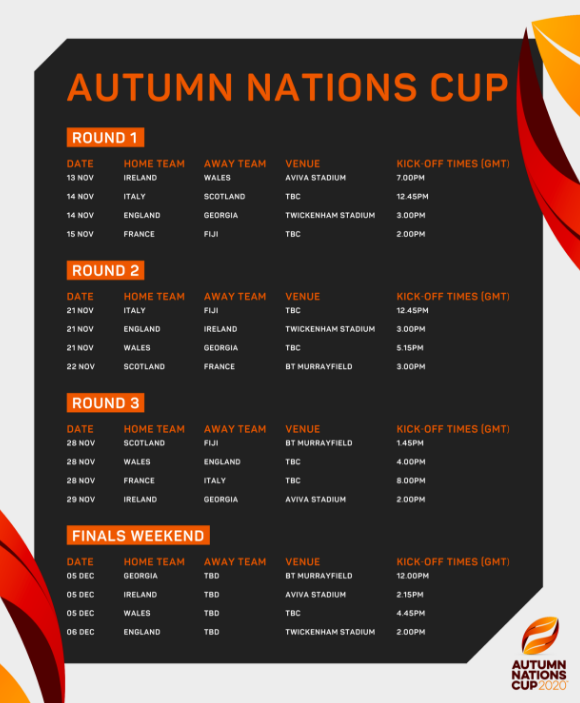 It's too early to say whether fans will be allowed into the matches but with broadcast schedules set to be announced in due course, you won't miss a minute. On a side note, the weekend of our opening game against Wales is set to be a brilliant few days for sports fans, with Stephen Kenny's soccer team also playing against our Celtic cousins, while the US Masters goes on over in Augusta. You'll hardly be moving from the telly at all.

Before all this, Ireland will conclude their interrupted 2020 Six Nations campaign against Italy on October 24 and France on October 31.

More information on the Autumn Nations Cup can be found here.

FAI confirm Ireland will play England at Wembley next month

Robbie Keane has reportedly landed a big job in management

Slovakia v Ireland - Time, TV info and everything else you need to know about tonight's crucial playoff