A trip to Salamanca is good for the soul.

Salamanca has magic at its core. It's one of those very rare places that everyone loves and it's not hard to see why.

A UNESCO World Heritage site, the city is only two and a bit hours from Madrid... though I will admit that the bus journey there feels much longer.

Often referred to as "Spain's Golden City", I can only describe it as the Galway of Spain. As a university city, it has that same studenty feel that is so characteristic of Galway - with a booming nightlife and relaxed atmosphere to go along with it. The only thing it's missing is a coastline... but nowhere could compare to the Salthill prom anyways.

Up there as one of my absolute favourite places in the world, it's where I spent the first semester of my Erasmus year abroad and so holds many special memories for me.

I knew little to nothing about the place before packing my bags and heading off on my merry way but as it turns out, there's quite a bit more to the idyllic city than you'd expect. For example, it's home to one of Europe's oldest universities, has arguably the most beautiful plaza in all of Spain and is a popular stop-off on the Camino de Santiago.

Having lived there for five months, I would say that I know my way around the city fairly well and so I've compiled a list of my 'must-hits' for your next visit there.

Though Salamanca is quite a small city, finding central accommodation is absolutely key. Taxis are not as common here - yes they exist but they can be hard to find and flag down so do yourself a favour and just book somewhere within walking distance of all the top spots. This is where I stayed on my last trip there and it was ideal.

The apartment has two rooms, both with double beds and their own balconies. 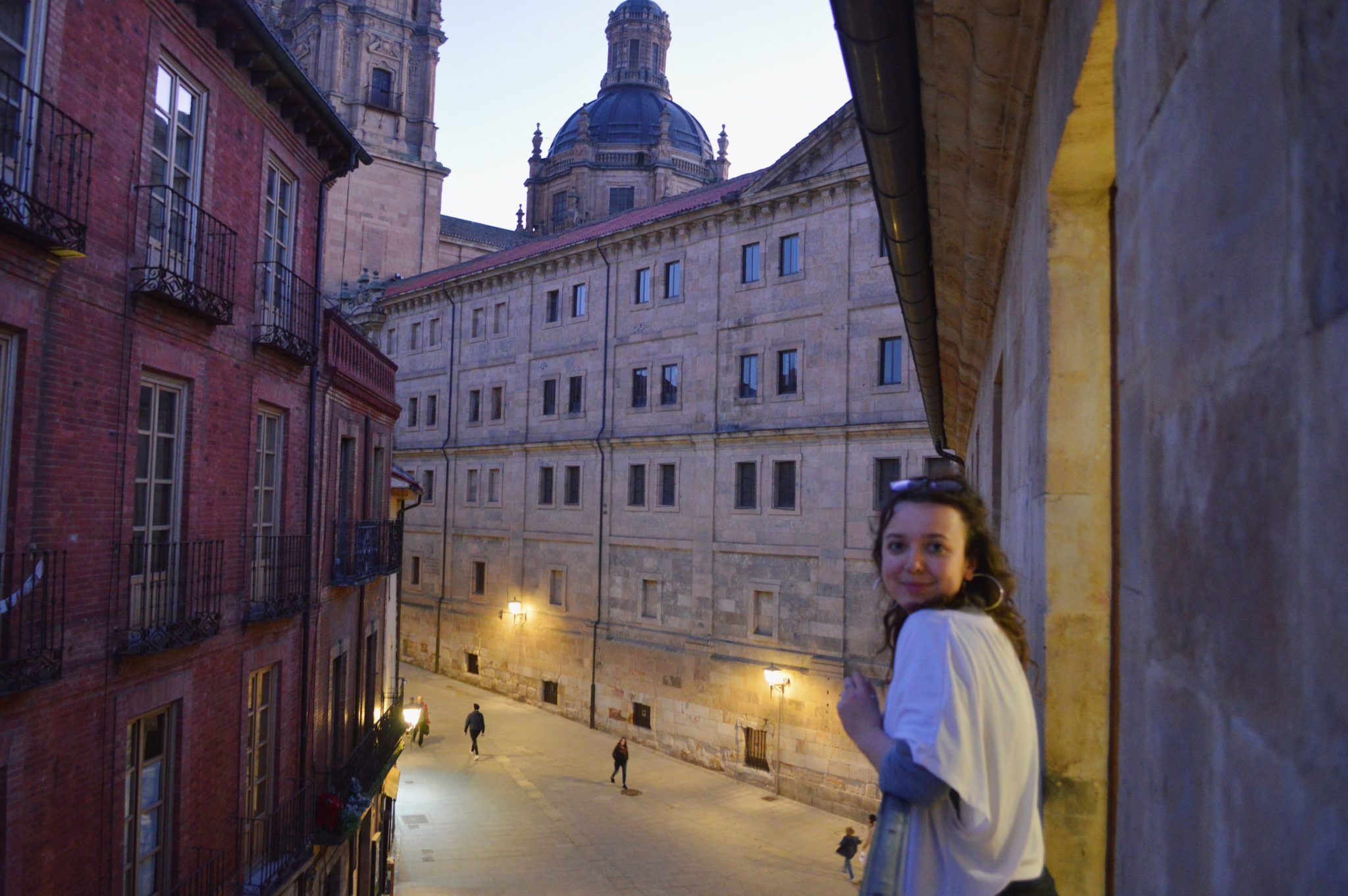 And the views are something else. Imagine waking up to this every morning? 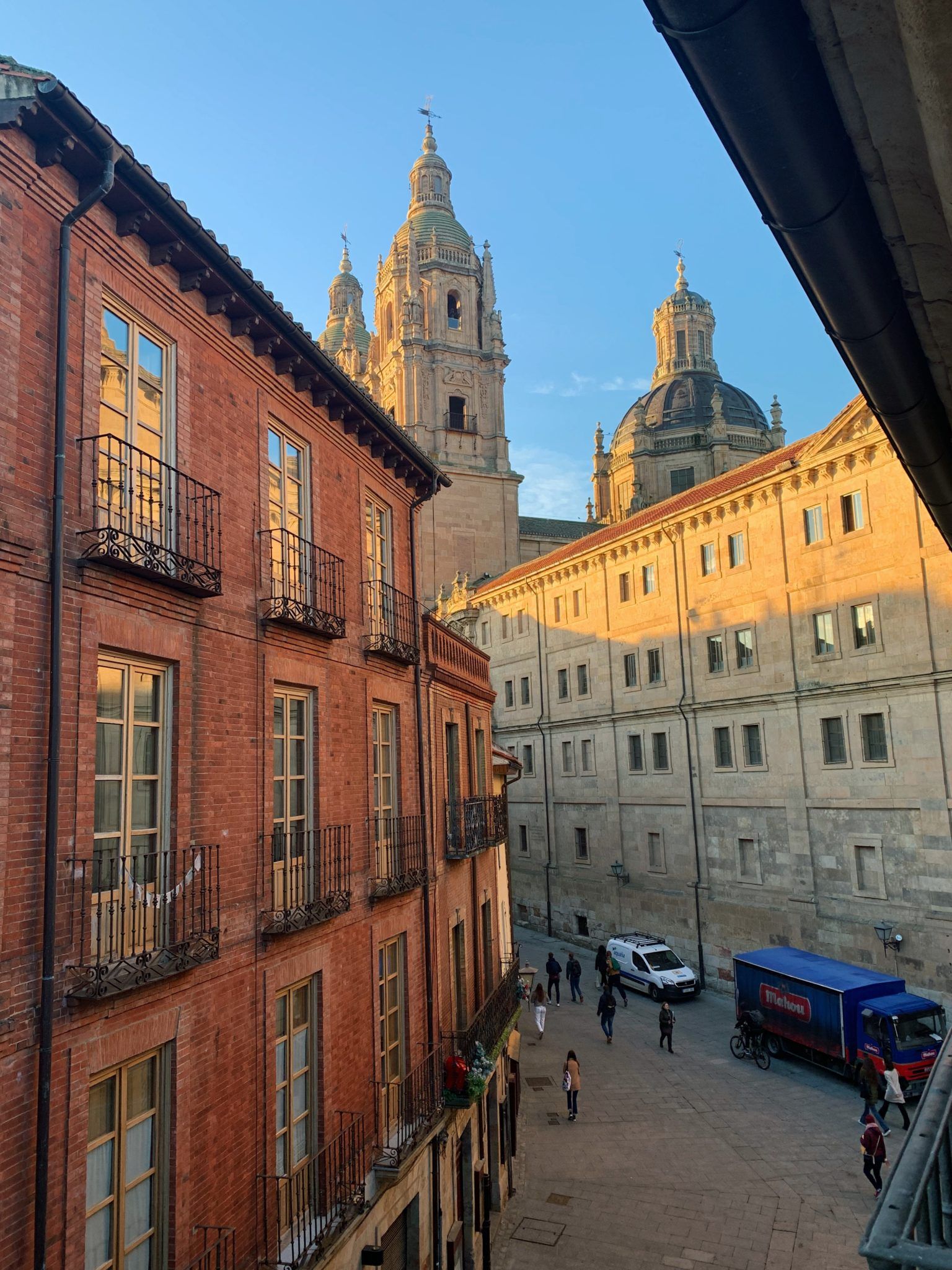 Bonus - it comes with its own coffee machine and pods. Ticks all the boxes really.

When it comes to culture, there are a few things you have to see.

The Pontifical University gives visitors access to the bell tower for some of the most stunning views of the city. It's free to enter on a Tuesday morning (until 10:30am I think) but it only costs around €3 anyways so a trip up won't break the bank.

Be prepared to sweat, it's a tough climb but so worth it for the pics.

Unlike me, Salamanca has no bad angles

Not a whole lot to see inside the building (it's a public library and is still in use so is usually full of Salamantinos going about their day) but the outside is one of the most recognisable landmarks in Salamanca.

Translating to "house of the shells", the facade is covered in, yep you guessed it, shells. And lots of them - more than 300 in fact. 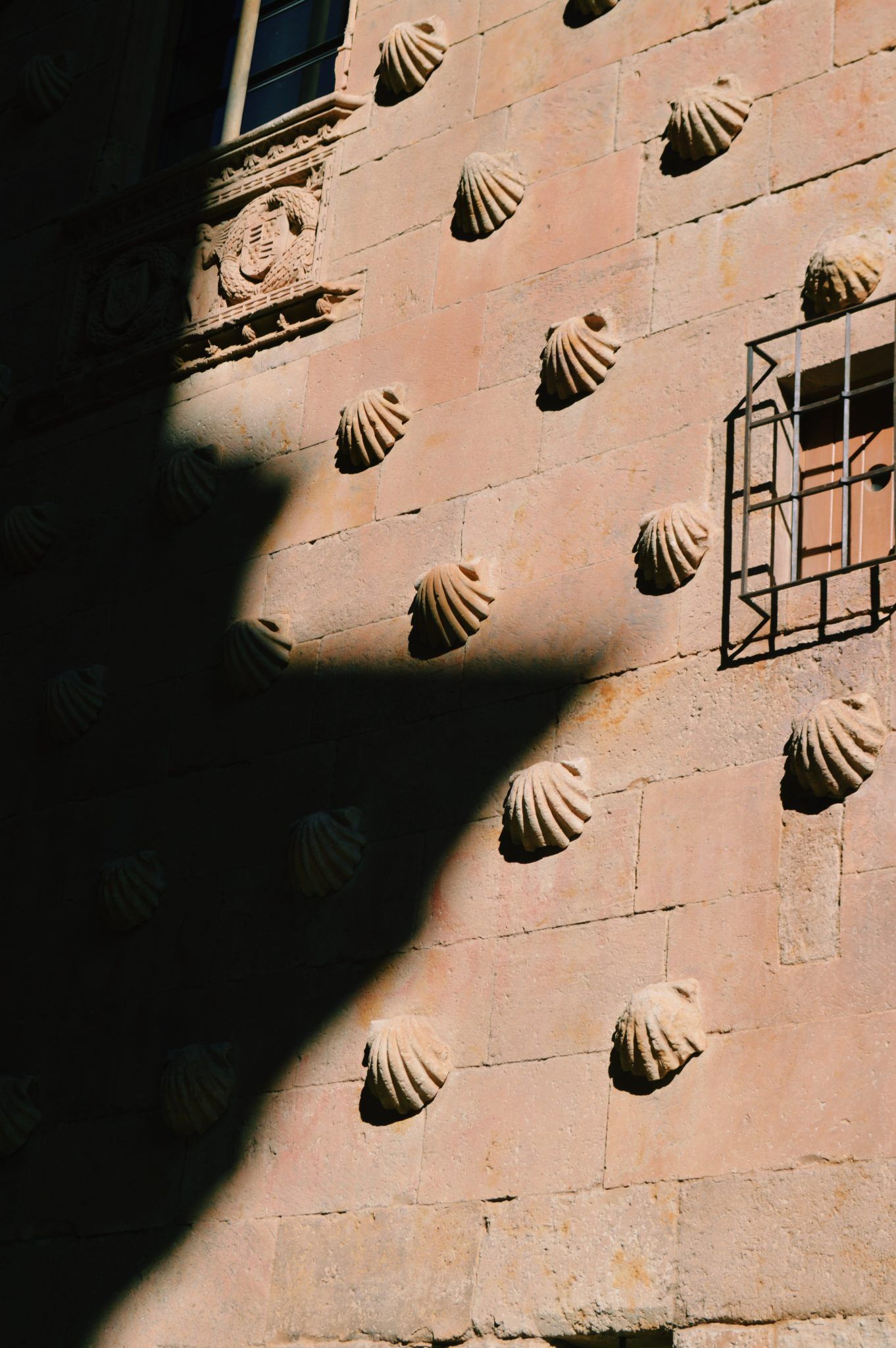 The symbol of the order of Santiago, it's also the symbol of anyone doing the Camino, which explains why you might spot pilgrims dotted around the place from time to time.

This is a must-see regardless of whether you're into art or not. Located within the city walls, Casa Lis is Salamanca's resident Art Nouveau and Art Deco museum. The colourful stained glass windows will keep your social media feed looking fire as there will be 'grams a plenty.

You're not technically allowed to photograph the glass roof when you first enter the building but if you head to the onsite café you're sure to get some pics.  They have good coffee too, though where in Spain doesn't? Café con leche for life.

Visitors are challenged to find the Salamanca spaceman on the facade of the building (added during renovations in the 90s). Put your 'I spy' skills to the test.

Located fairly near to the bus station, Barrio del Oeste is known for its imaginative street art. Grab your camera and meander through the winding streets...there's no rhyme or reason here so the best way to do it is to go without a solid plan and just see what you see.

Here's a sample of what you can expect. 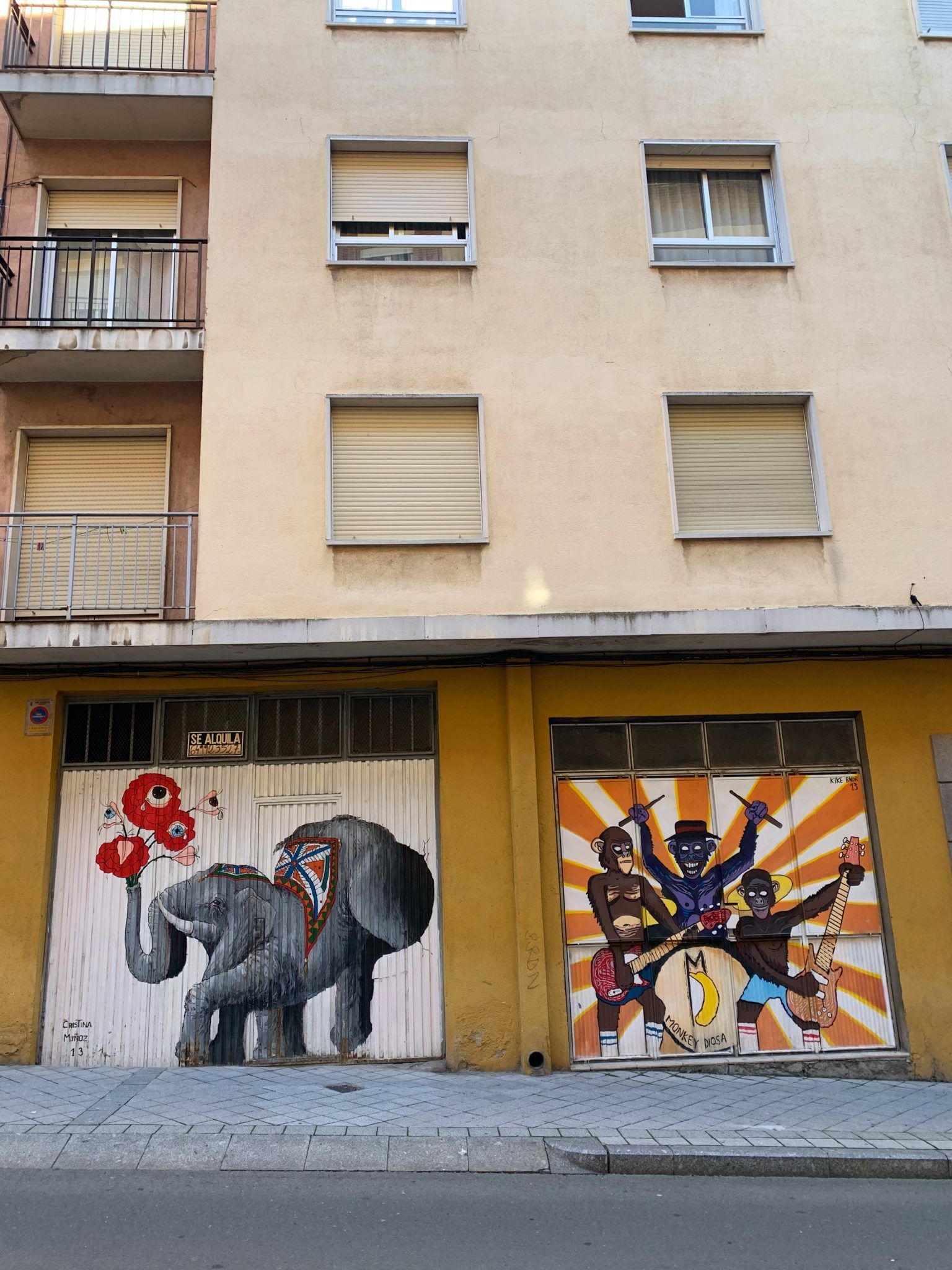 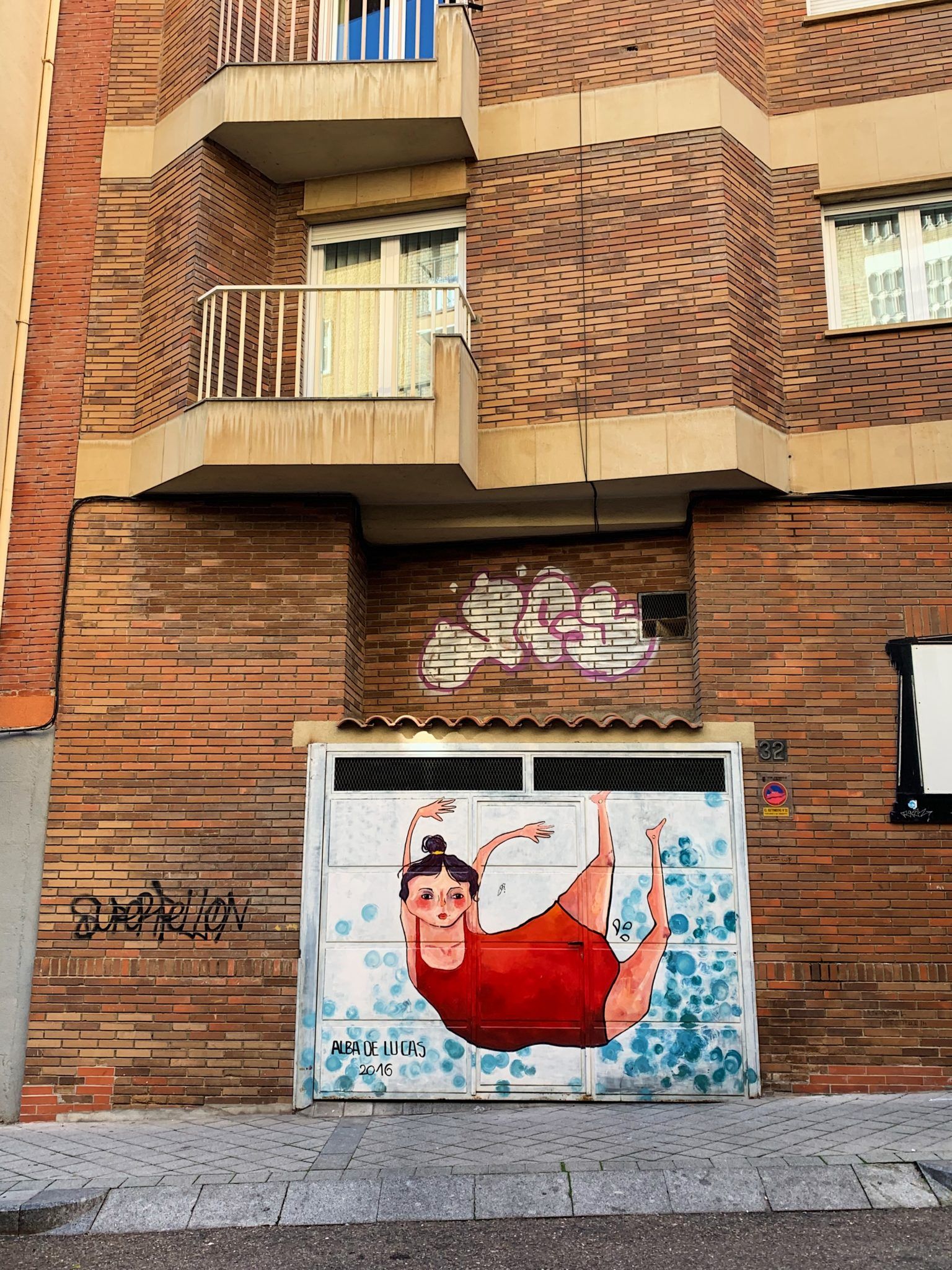 New murals crop up all the time so it looks different each time you visit. What used to be the ghetto of Salamanca is now one of its most colourful attractions.

I stand by my previous statement that Salamanca's Plaza Mayor is one of the most beautiful plazas in all of Spain. Photos hardly do it justice so you'll just have to go there to experience it for yourself. 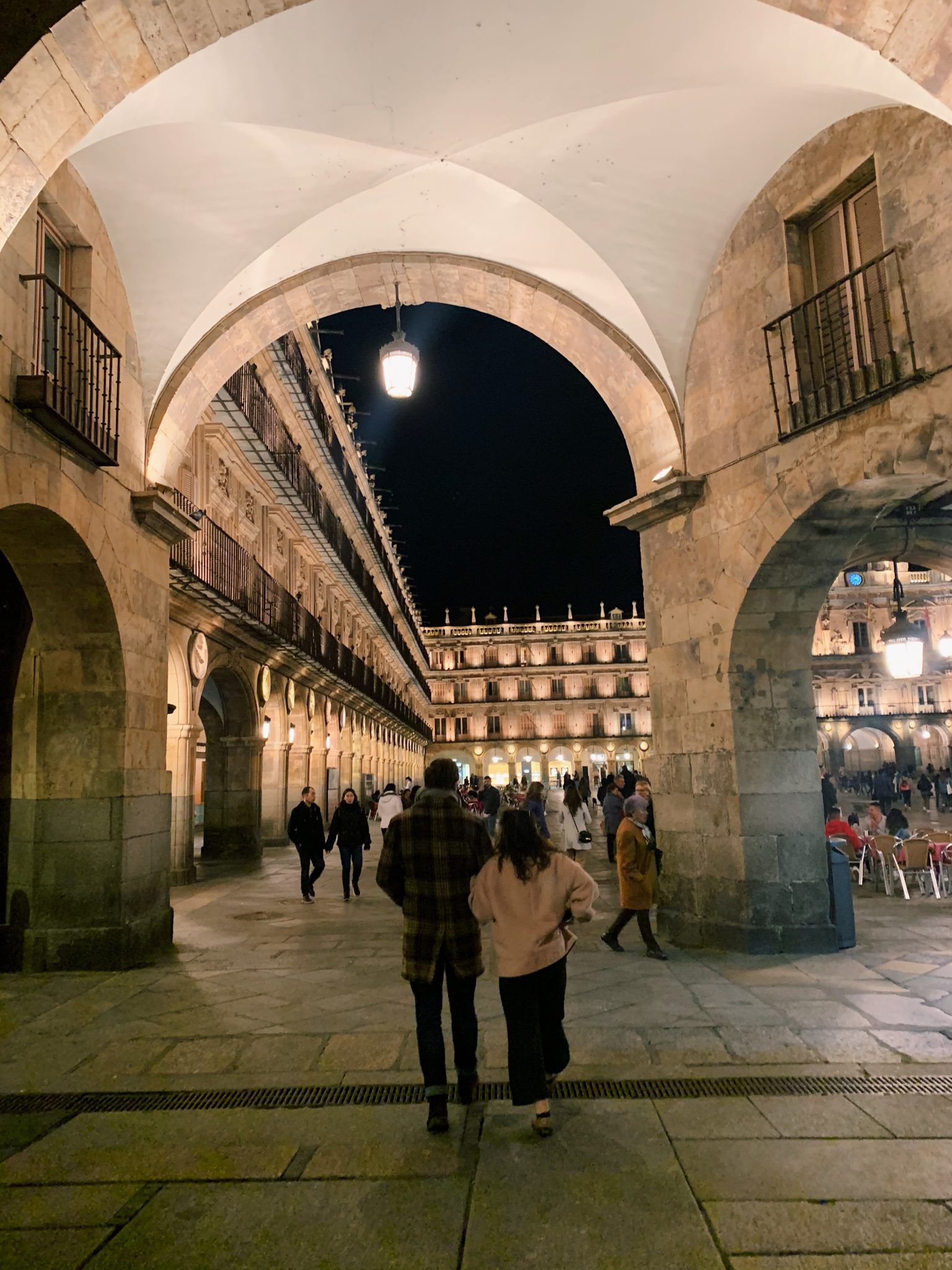 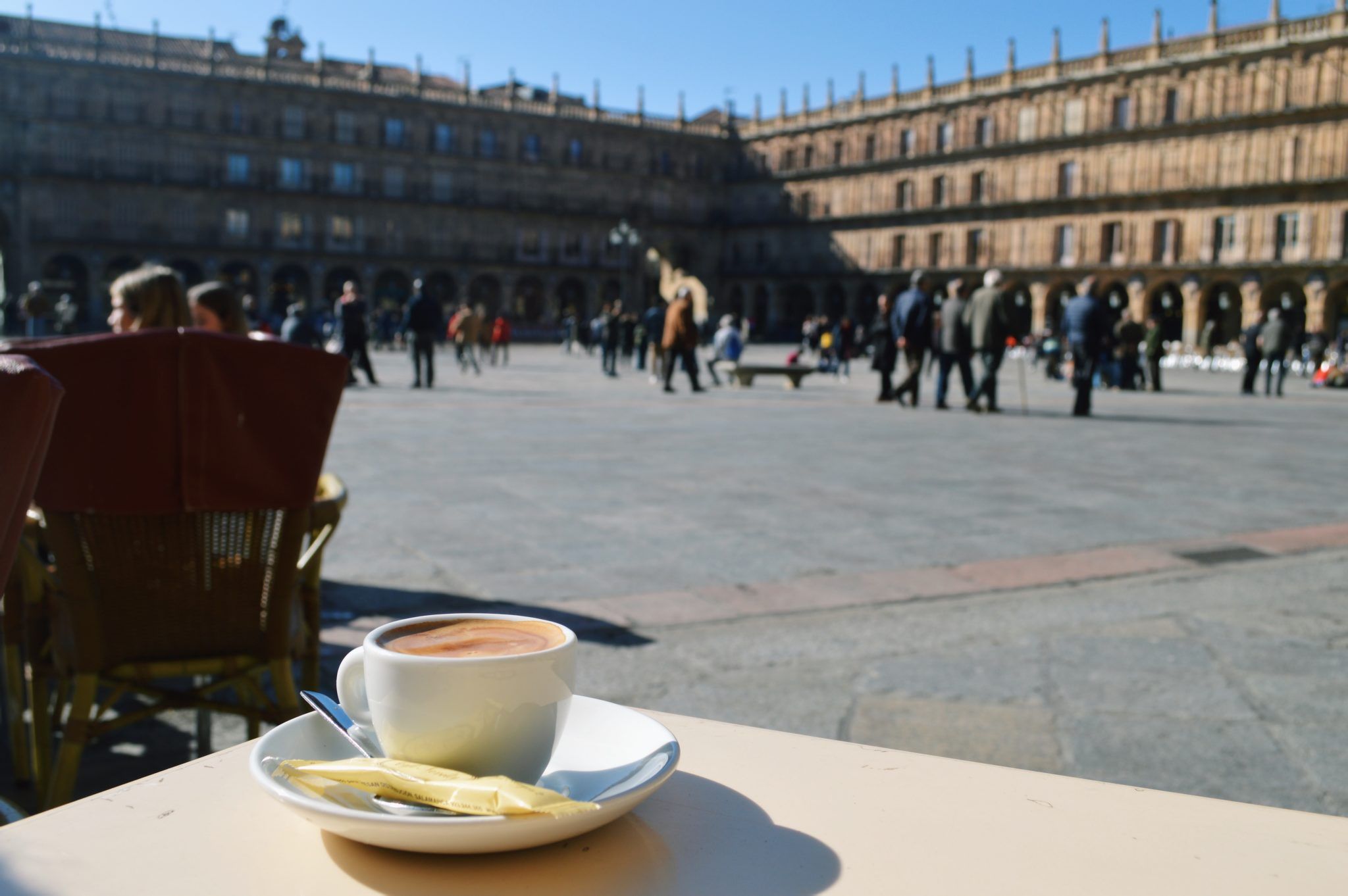 The heart of the city, it's busy almost any time of the day or night, so don't be surprised to find it hopping at 5am when partygoers pass through on their way to the next stop. The place really comes to life when the sun goes down though and both the old and the young alike flock to the square.

I'd go so far as to say I'm at my happiest sitting in Plaza Mayor with a glass of vino in hand.

The University of Salamanca looks pretty good for being over 800 years old. Spain's oldest university, it's also the fourth oldest in the world and the first to allow a woman teacher to work there. Feminism is alive and well in Salamanca.

According to local legend, spotting the statue of the frog perched on the outside of the building will bring you good luck and help you pass your exams. The building was under construction while I was studying there which is probably why my exam results suffered...that's my story and I'm sticking to it.

Also home to the world's first university library, it looks straight out of a Harry Potter scene.

Given that Salamanca is inland, it's not known for its seafood/paella offerings. That's not to say its food isn't good though. Quite the contrary - especially for meat-eaters who will be in cured meat heaven. You're guaranteed a good feed at basically any spot you call into, but the below are some of the standouts for food and drink. 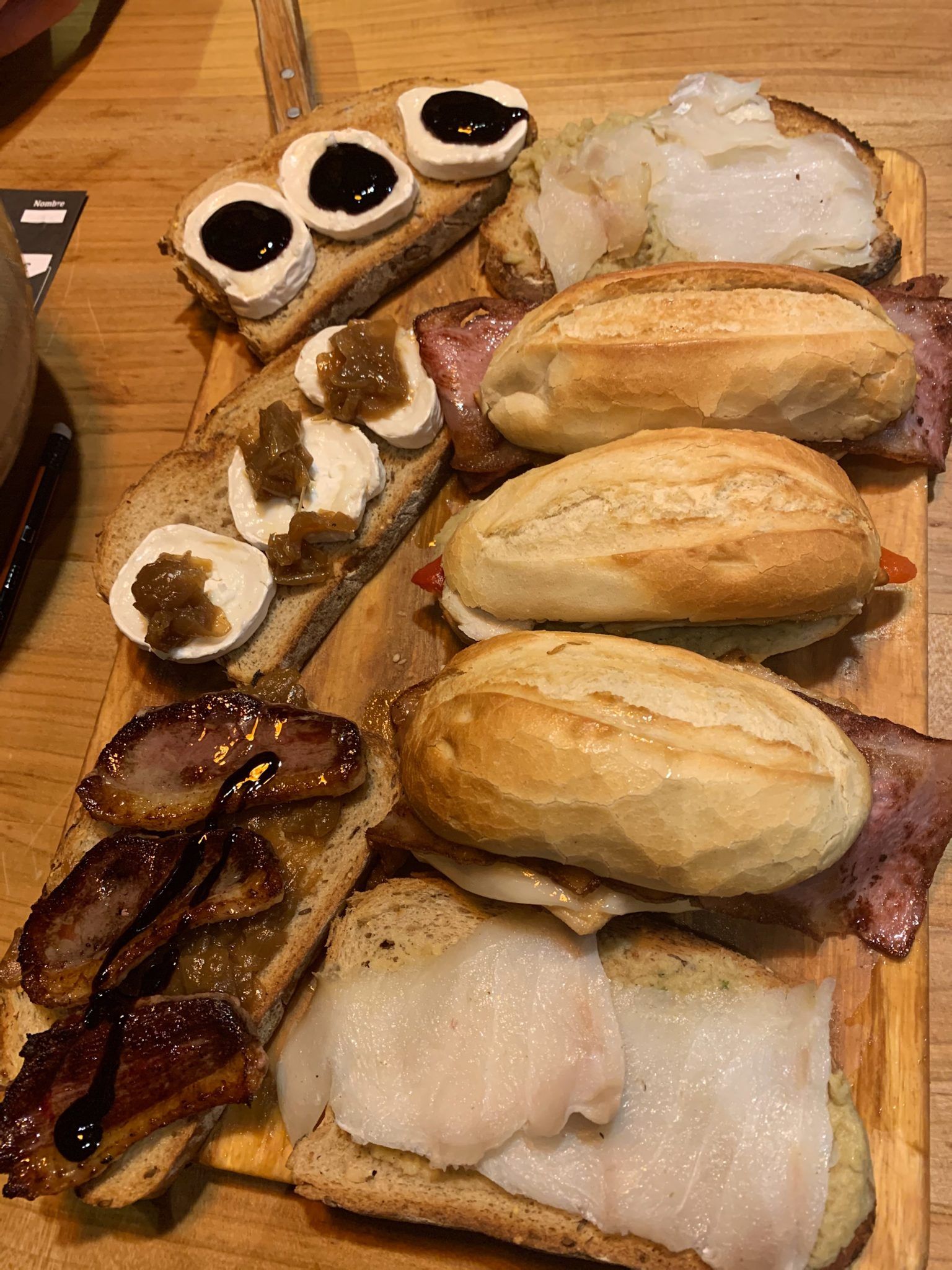 The tapas from Mandala are absolutely top-notch. In fact, I'd rate them as some of the best. Friends of mine argue that Don Quijote have better, and while their offerings are definitely good, I still rank Mandala higher.

Why? For the simple reason that Mandala serves up one of the tastiest tortillas I've ever tasted, and I don't say that lightly. 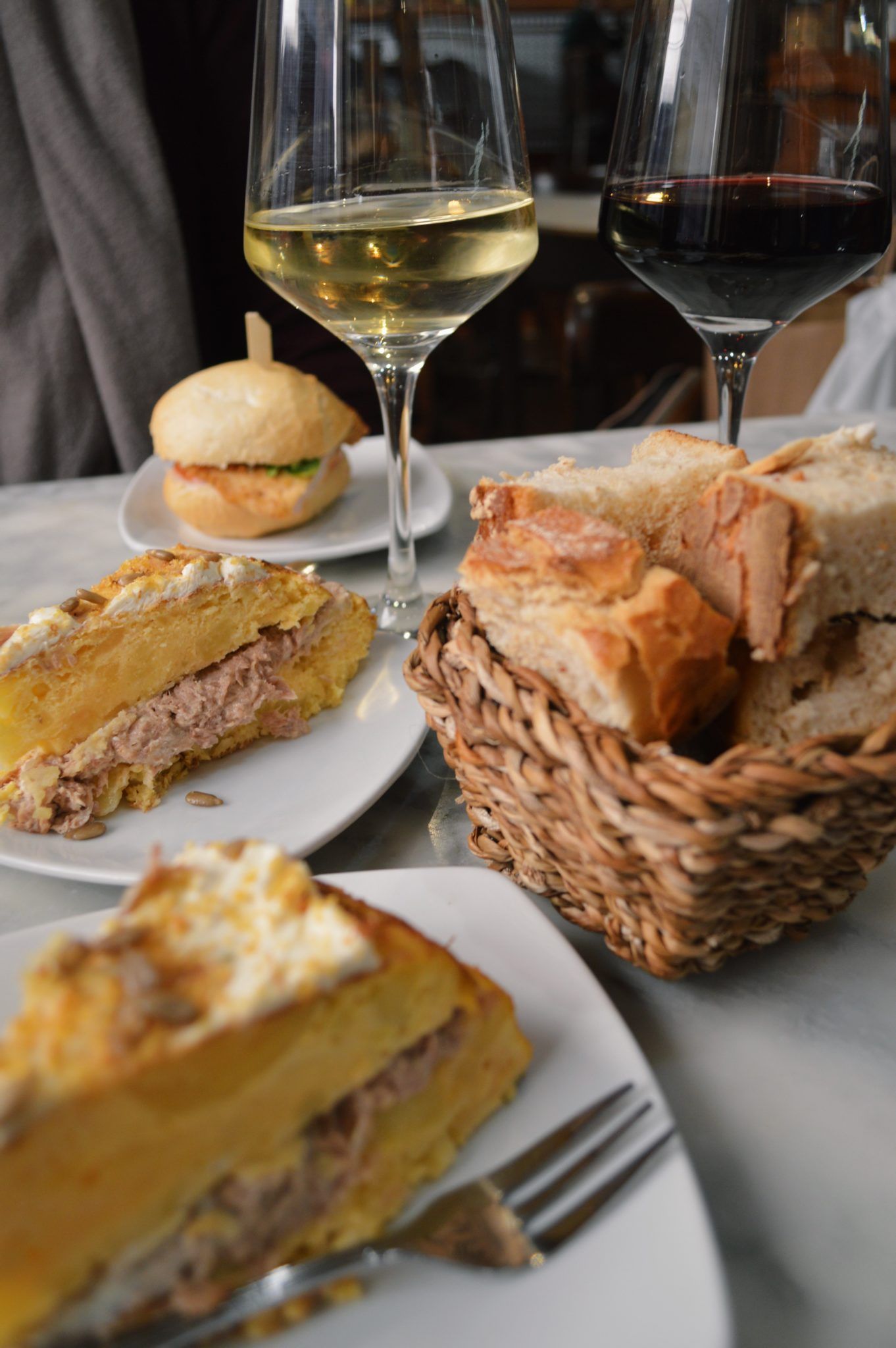 For anyone who doesn't know, Tortilla Española is a Spanish omelette made with eggs (duh), potatoes and sometimes onion. Mandala serves theirs with tuna and cream cheese too which, I agree, doesn't sound appetising but I promise you is the stuff of dreams - it's that good.

The cafe's interior is cool and quirky with loads of seating but be warned - it fills up quickly during peak times so boot it down to beat the crowds.

One of the dotiest rooftop bars in Salamanca, and one I only discovered on my last visit there - which is a crying shame.

To further the Galway nostalgia, this place gives me serious Secret Garden vibes what with the boho-chic decor, funky fairy lights and relaxed atmosphere.

The building houses a small theatre that puts on intimate one-room shows, while at the top you'll find a bar serving up drinks and nibbles. Sit outside if it's not too cold (Salamanca can get cold in the evening... despite the misconception that Spain is always warm) and enjoy the terrace views. It looks out onto the bell tower and is a great spot for some people watching on the street below. 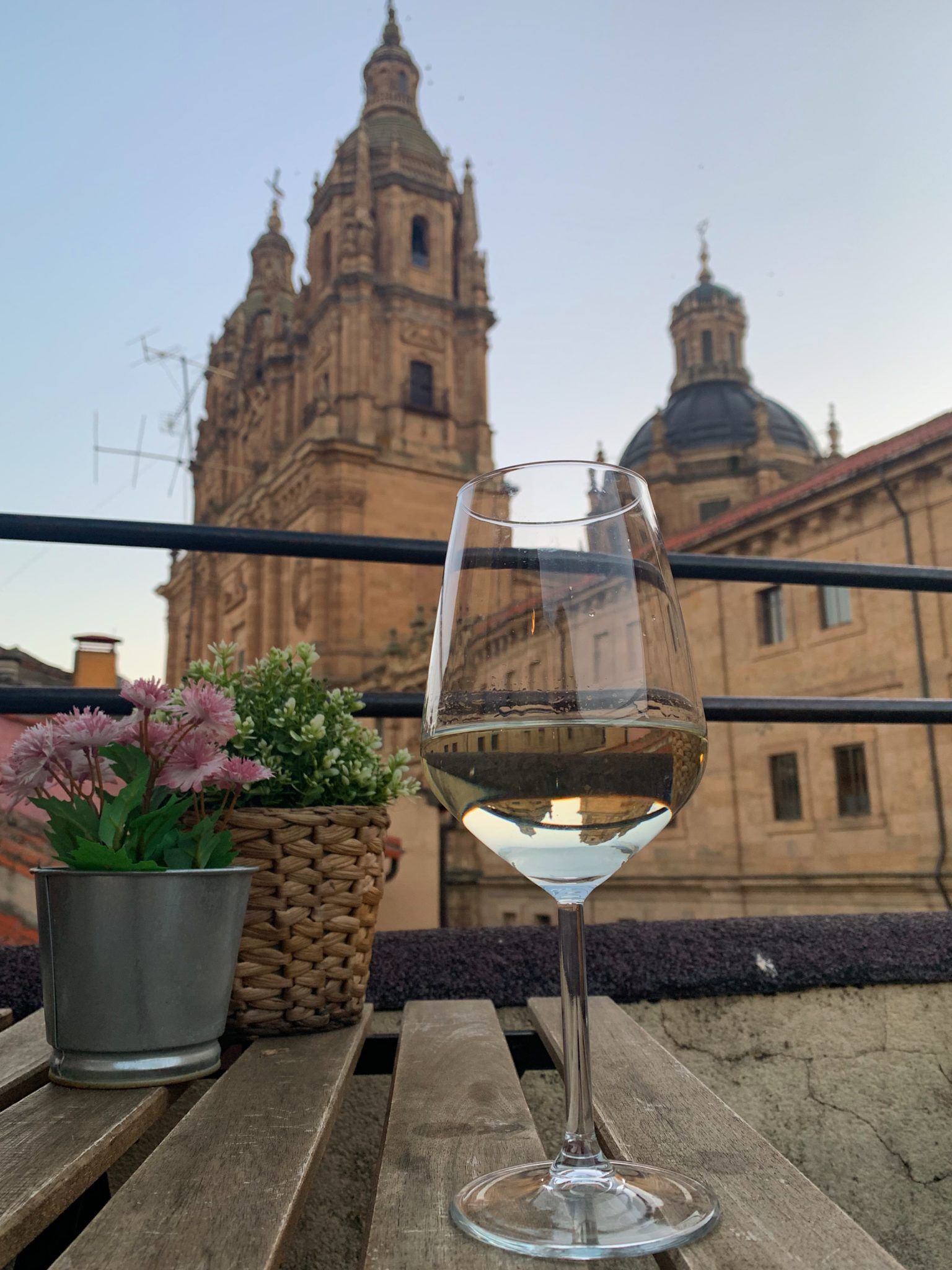 I'd recommend the semi-dulce wine too.

Cocktails are not really a thing in Salamanca, with the exception of Café Niebla. They have quite an extensive menu, all reasonably priced and all delicious. Staff are really friendly here too and for the cherry on top - they bring over a bowl of mixed nuts and pretzels before you even order... brain food to help you make an informed decision. 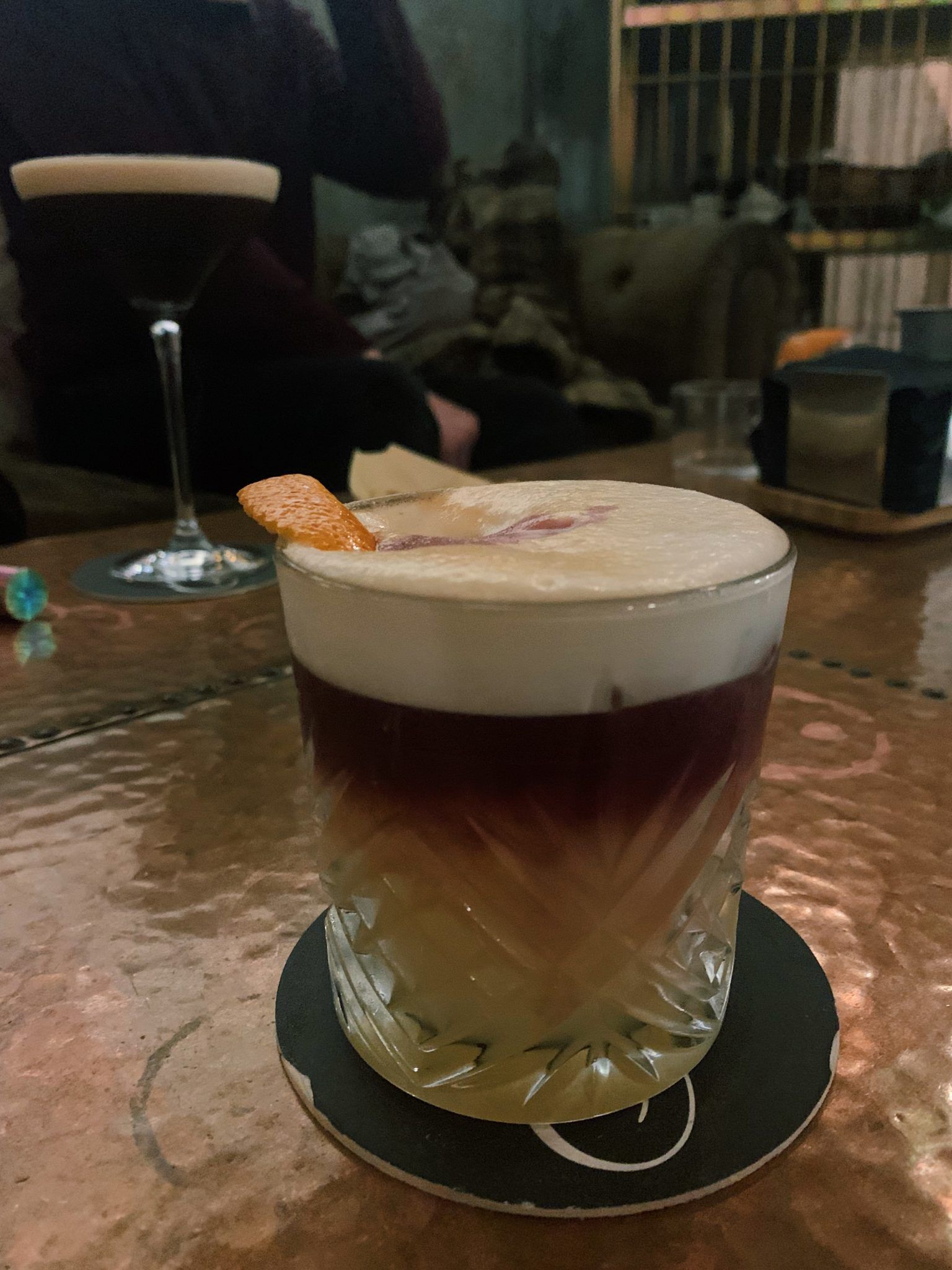 If cocktails are your thing, there is also Doctor Cocktail (another bar that specialises in cocktails) but I personally don't like it as the inside is really dark and cramped.

You're better sticking with Café Niebla or having a few glasses of wine at the plaza in my opinion.

As a city inhabited mostly by students, there's something to do in Salamanca practically every night of the week. Their nightlife is up there with the likes of all the big cities... it would give Madrid a run for its money let me tell you.

Going to Chupi (as it has fondly been christened by locals) is a rite of passage.

Classed as a shot bar, most chupitos or shots on the menu cost as little as €1 which is as dangerous as it sounds. A melting pot for both students and locals, this is usually the first stop off on a night out - there's a crowd congregated outside most nights of the week.

And to say their menu is sizeable is an understatement. Start with a chupi de la casa or house shot (comprises a mini ice-cream cone, baileys and whipped cream) and go from there. 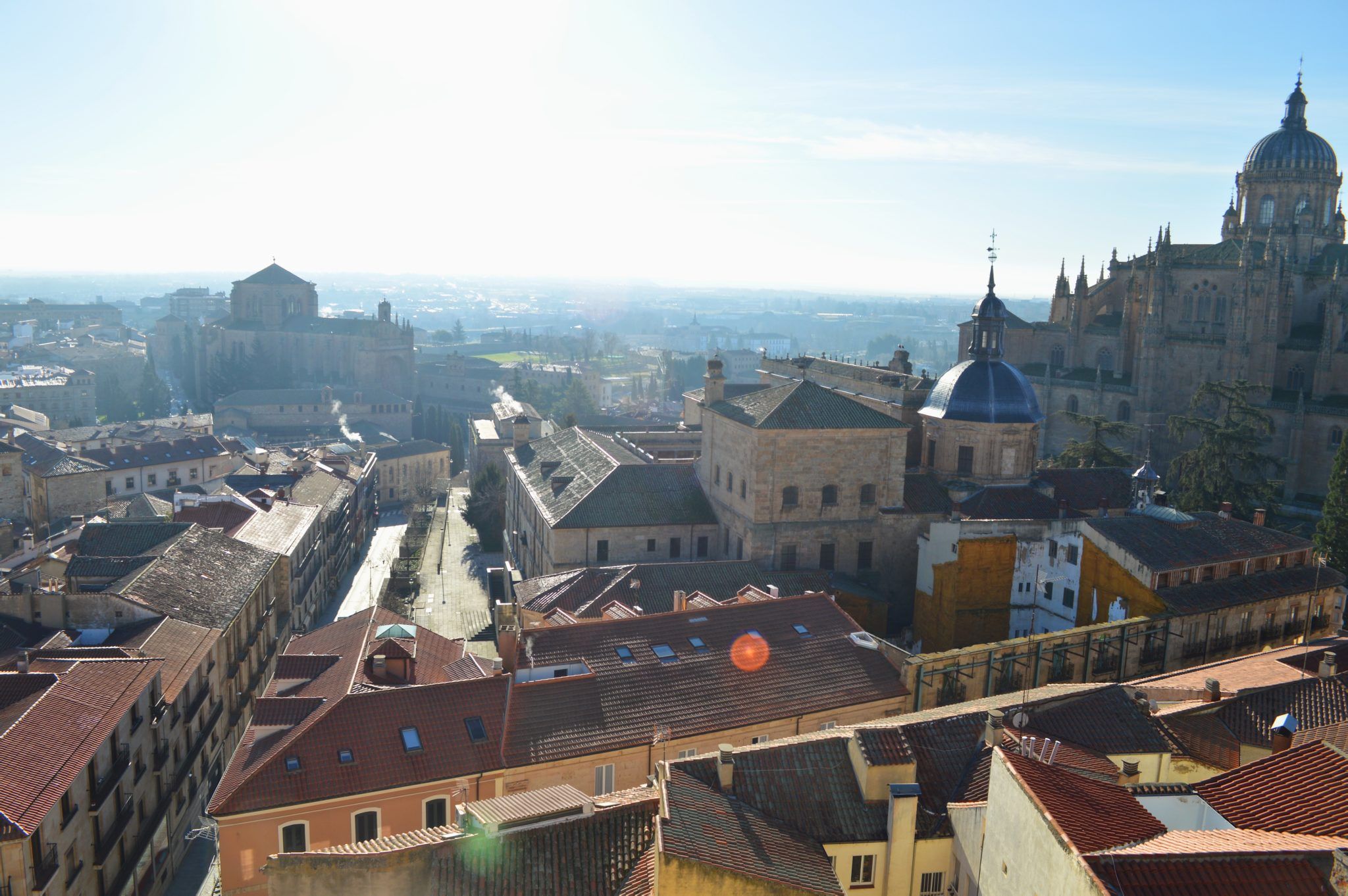 Locals will probably tell you to steer clear of Kandhavia but you'll always find a party here. It's open until 6:30am at the weekend and 4:30am during the week which says it all really.

Kandhavia was on my walk home when I lived in Salamanca so I'd often "call in for a look"... which as you can imagine ended with me running into someone I knew, losing track of time and crawling into bed at 7am the next morning. You can sleep when you're dead as they say.

An Irish pub simply had to feature on the list and Salamanca has quite a few would you believe. A café by day and a pub by night, it's very Irish inside so you'll feel right at home.

Usually, I'd run a mile from an Irish pub abroad but this one draws the crowds and with themed nights out, karaoke and the like you'd be silly to pass it by.

Gatsby is a bar/disco - the Galway equivalent being The Front Door. Kitted out with its own dancefloor, it's a good spot for dancing.

You may notice another spot right across from Gatsby called Camelot, but if you happen to go inside please heed my advice and DO NOT CLIMB ON THE GIANT SPEAKERS. Sorry for yelling, but doing so only ends in disaster - I won't go into the details but let's just say it's not a good idea in any world. 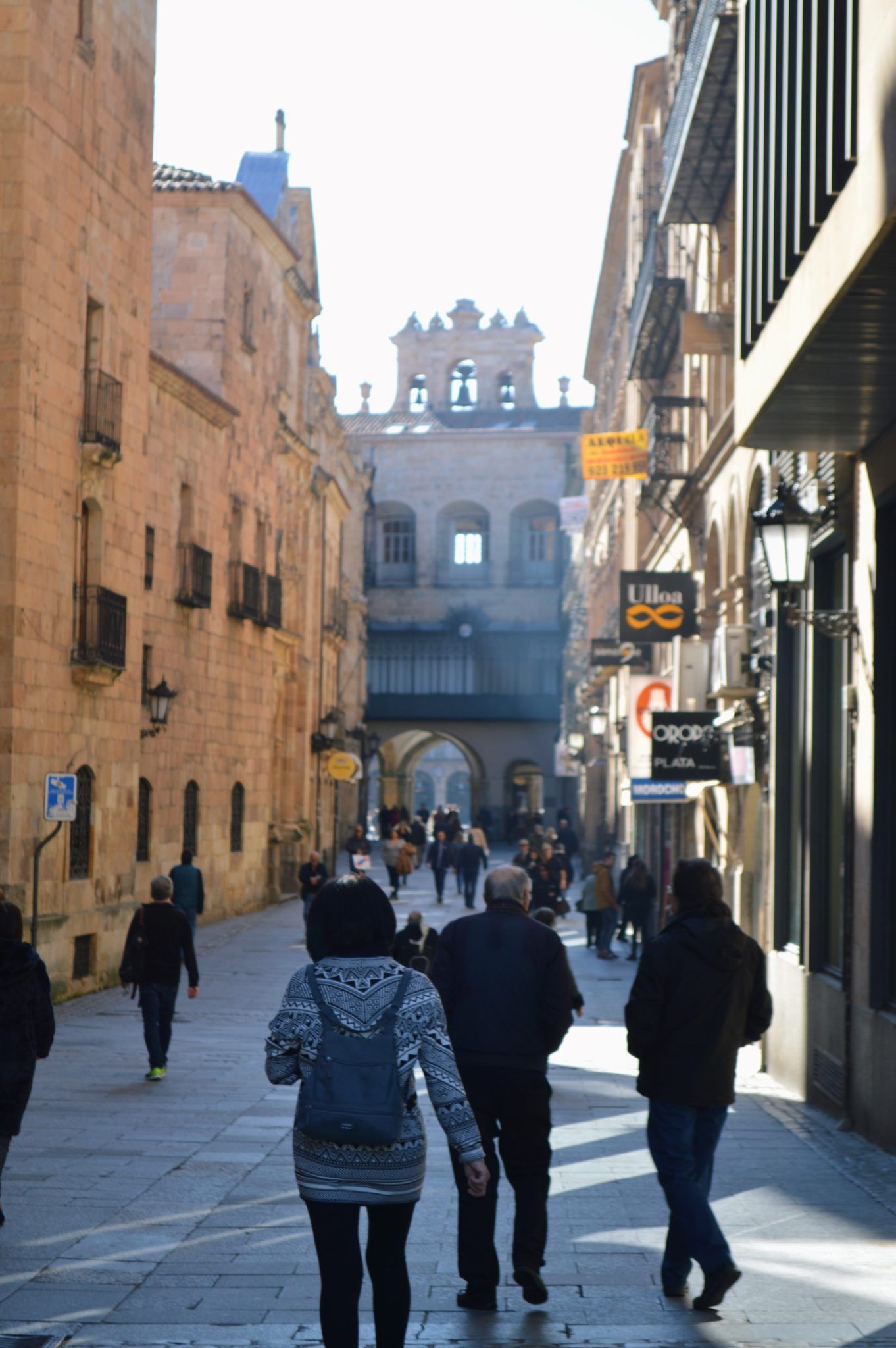 As you can probably tell, I could go on and on about how great Salamanca is but you really just have to go and experience Spain's Golden City for yourself.

Did you know you can go hovercraft racing in Cavan?