The USA should be ticked off everyone's travel bucket list more than once.

There are so many different states, cities and resorts to visit, all drastically different from one another. From a family vacay in Disney World Florida to a crazy hen or stag in Vegas, there's something for everyone.

I did a J1 a few summers back and ticked off all the usuals: Vegas, LA, San Fran, Washington DC, The Big Apple and Boston. It was actually during my stay in Myrtle Beach, South Carolina however, that I came across probably my favourite place from the entire trip.

Charleston is one of the most stunning places I've ever been to.

Based in South Carolina, this port city is steeped in history and wealth.

The best part is, it's such a hidden gem! So little tourists, especially Irish tourists know about it so it feels undiscovered.

Founded in 1670, it has still managed to keep it's charm with cobblestone streets, horse-drawn carriages and pastel antebellum houses.

The Battery promenade and Waterfront Park overlook the incredible Charleston Harbor, while Fort Sumter, a federal stronghold where the first shots of the Civil War rang out, lies across the water.

Charleston is STUNNIN 🌞 Definitely somewhere I'll dream of going back to for years to come. 🗺 #Charleston #j1 #travelgram

This village has some of the most breath-taking architecture I've come across in The States. The houses are so big and vast that the front doors are actually located at the side. They have huge windows, stone steps and large gates. It's like looking upon a real-life dolls house.

That time I saw a real life dream-house 💕 #pinkforvday

Charleston also has a connection to Ireland with a stack of basalt rock from the Giants Causeway standing proudly at the Town Hall, how random?

Ryan Reynolds and Blake Lively's wedding location ft. lanky legs. 🙋🏼 Had the best day ever in Charleston yesterday, one of the most beautiful, historic and wealthy places in the USA. 🇺🇸 #j1 #travelgram #summer #lovinglife

There is a long market place located in the centre of the town, filled with unique craft, fresh food and the perfect gifts to bring home.

You could spend hours there just walking around and taking it all in. As it's located by the sea, it's known for having some of the best seafood around and I can vouch for that one.

The walk along the pier is a must, you'll be able to see some of the richest houses, the glistening seas and darling parks that are decorated with blossoming gardens and dainty bandstands. It also has some of the cannons from the Civil War there.

Moving on, you might spot the house of the infamous Anne Bonny, female pirate of the seas. She was an Irish pirate operating in the Caribbean, and one of the most famous female pirates of all time. 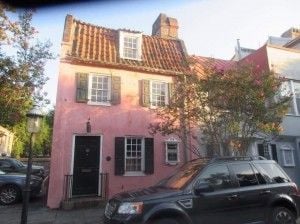 Charleston was also a popular area during the American Plantations.

While I was there, we visited Boone Hall, which is a huge house that operated during this time. For all the movie fans out there, it was also Ally's home in The Notebook.

We finished off the evening in one of the bars in the town, there's plenty of them and they're actually great craic.

If you're travelling to the US any time soon, Charleston NEEDS to be on your list. It's honestly one of the most incredible places and it really gives you a feel for American history and how this powerful country came to be.

Christmas FM is coming back for one day only tomorrow

New changes to Airbnb as bookings pour in for the summer