He might be Love Island's newest winner but Finley Tapp may have to fulfil some pre-show obligations before he starts enjoying his newfound reality television fame.

Finn's football club, Oxford City, are expecting him to return to see out his deal after the defender left for the Cape Town villa last month without letting the club now.

Mick Livesey, Oxford City's commercial director, insists that the 20-year-old will have to honour his contract with the club.

"He was [in breach of his contract] but I think you need to take a pragmatic sort of view: A 20-year-old lad, he's offered all this reality TV stuff," Mr Livesey told BBC Radio Oxford.

"He has a contract, so he has to finish the contract he has with the football club. 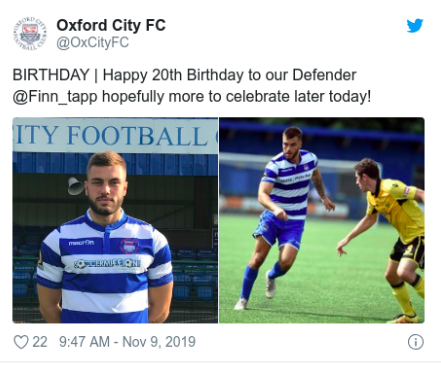 Finn was released by MK Dons at the end of last season and was snapped up by Oxford City before he took the opportunity to take part in Love Island, joining the cast early on in the winter series.

He coupled up with popular Paige Turley and the pair went on to win the £50,000 prize after coming out on top in Sunday's finale's public vote.

In a bid to avoid future scenarios of players swapping football for reality TV midway through a season, Oxford City plan to add a clause to contracts moving forward.

Mr Livesey added: "I can assure you that all new players we sign from now on, we will be putting clauses in their contracts. I think we're going to have to."