Back in the 80s and 90s, every child in Ireland was running around in some form of white t-shirt with Jack Charlton's head on it.

Well, thanks to Penneys we can now relive those glory days while helping out an important charity at the same time. The retail chain have announced that they are selling t-shirts in honour of the recently-passed Ireland manager for just €6, with all profits going towards the Irish Cancer Society.

The front of the garment has an image of a smiling Jack Charlton behind a collection of joyous Ireland fans, a scene that became commonplace at major tournaments during that golden era. It also has the years of his birth and death as well as the words 'thanks Big Jack' and 'one of our own'. He certainly was.

A spokesperson for Penneys said: "Penneys is honoured to recognise Jack Charlton’s incredible contribution to football and his impact on Irish society with a window poster tribute to him across all of our stores in Ireland.

"We will also be launching a limited edition t-shirt featuring Jack, inspired by a design from our 1990 World Cup range. The €6 t-shirts will be on sale in all Irish stores from Friday 24th July with all profits going to the Irish Cancer Society." 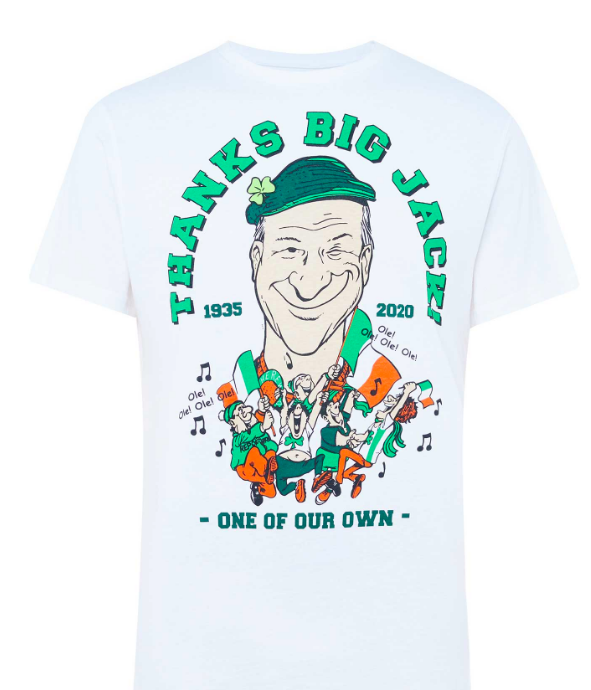 The perfect way to pay tribute to the great man while helping out a wonderful cause. If you find yourself in Penneys with a loved one and they refuse to purchase one, you know what to do - Ya put 'em under pressure.

Sorry. We think Jack might have smiled at that one, at least.

A lovely Jack Charlton mural has popped up in Waterford