Cork’s Custom House Quay will be set for a huge redevelopment including a 34-storey hotel if new plans are to go ahead.

The development, linking the peninsula to the centre of the city while introducing a large public space for the first time in the history of the site, will feature the restoration of the existing landmarks and the introduction of a new 34-storey hotel tower.

This new hotel, with unparalleled panoramic views across the city, would be double the height of Cork’s current tallest building, the 17-storey Elysian building, and would also surpass Dublin's 22-storey Capital Dock. 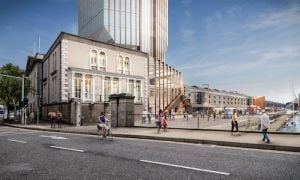 The hotel will offer spa, swimming pool and gym facilities, while the top of the tower will feature a sky bar and restaurant. 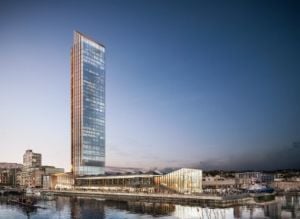 Tower Holdings Director of Operations (Ireland), Conor Lee said, “Custom House Quay will be the centrepiece of Cork’s new business district. For the first time ever, this entire area will be fully opened up to the people of Cork.

“As the tallest building in Ireland, the hotel itself will be a focal point for the city rising. Equally, the design is aimed at preserving the existing infrastructure for future generations through the addition of new tourism and commercial offerings.

“We firmly believe that Custom House Quay will rival similar offerings in other cities around the globe, and help contribute to the future success of the city in the same way that the Port of Cork did for centuries.”

READ NEXT: Cask In Cork Has Just Unveiled Its Very First Brunch Menu

WATCH: Buskers make a welcome return to the streets of Galway

One of Cork's oldest pubs reopens to the public this afternooon