Every once in a while, you see something so mind-blowing that it literally leaves you lost for words. Recently, I had just that experience.

The date was July 20 2019, 50 years on from the day that Apollo 11 landed on the moon. Fittingly, for the day that was in it, I was invited to join up with Galactic Wicklow as they embarked on a stargazing experience at the Sugar Loaf car park.

The guys had been in touch before but given the erratic nature of Ireland's weather, it's hard to pin down a date as you can't really tell what nights are going to be clear until a couple of days beforehand. On that note, I received an email on Thursday the 18th which said that the Saturday would be a good fit so, after a quick check of my not-so-bulging diary, I agreed to join.

When I accepted the invitation, the significance of the date hadn't yet occurred to me but when that became clear, it was pretty exciting to know I'd be spending the anniversary of one of human history's most famous achievements looking up towards the very site where it took place.

At about 10.30pm on the night, myself and my girlfriend Sarah-Jane got in the car and made our way towards the Sugar Loaf, just a little bit further than Bray on the N11. Upon arrival, we were met by Ramon, the leader of the operation, as well as some other curious space enthusiasts. Ramon told us that he and his friend and business partner Jimmy had been stargazing recreationally for many years. Three months ago, they decided to share their passion with others and Galactic Wicklow was born. Unfortunately, Jimmy couldn't be there on the night but between Ramon and his pair of helpers, all bases were covered.

Ramon instantly made us feel at ease, as he showed us around his impressive line-up of telescopes and binoculars which we would be using to take in the night sky a bit later on. Now, I could get into the details of these high-tech gadgets but it would be akin to one of the noisy nearby cows explaining Stephen Hawking's A Brief History Of Time. Best leave that to the experts but let's just say that the immense power of these lenses would become a bit clearer later on. 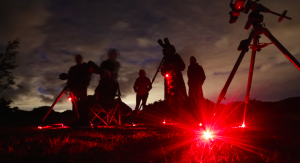 Ramon likes to limit groups to 10 people so as not to lose the intimacy of the experience and, basically, to ensure everyone can get a fair go and nobody hogs all of the equipment. On the night we went, there were seven people including ourselves and once pleasantries were exchanged, Ramon got things started.

He began with a brief intro into stargazing and posed questions like "who knows what a star is?" which of course we were all confident enough to have a stab at answering. A "big burning ball of gas in the sky" was the general consensus and to be fair, we weren't far wrong.

With his handmade chart and laser pointer, it was clear that Ramon had done his homework and his preparation even stretched to having tea, coffee, hot chocolate, and biscuits on hand to serve to everyone as we waited for the last remaining clouds to pass.

As things became a bit clearer up there, we were told that what we thought were particularly bright stars were actually Jupiter and Saturn. With that, we all took a turn through the viewing equipment and sure enough we all got a great look at both planets, with Ramon providing information on each one, something that would become a theme of the evening. 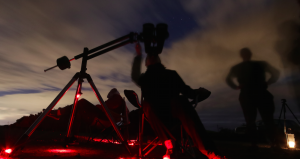 Our host's passion for the night sky was plain for all to see and not only was he informative, he ensured that the whole evening was great fun too. He clearly has a bit of the 'messer' about him and every story he told us was punctuated with one-liners and funny little anecdotes that helped bring this group of strangers together.

An appropriate soundtrack of ambient music was provided throughout the night and as we checked out Saturn, we even got to hear actual recordings from the planet itself. A real treat for the senses and pretty trippy too, to say the least.

Along with Saturn and Jupiter, a number of other items of interest were pointed out to us, including the International Space Station doing a few laps of the Earth as well as Andromeda, AKA the Milky Way's neighbouring galaxy. Throughout the evening though, Ramon kept telling us that we hadn't seen anything until we had viewed the Moon up close. All we had to do was wait until it overcame its shyness and crept out from behind the clouds. In fairness, it was a pretty big anniversary and we all get a bit timid at our own parties, don't we?

About 90 minutes in, it looked like our opportunity had arrived. The Moon poked its head out of a large cloud and even without the aid of any viewing equipment, it looked magnificent from our view high in the Wicklow Mountains. As mentioned earlier, luck plays a big part in your experience when you go stargazing so when we saw that the Moon looked almost completely full, we felt quite fortunate indeed.

One by one, Ramon invited us all to have a peek through the binoculars and when it got to my turn I sat down expecting to be pretty satisfied with what I saw. Understatement of the year, right there. 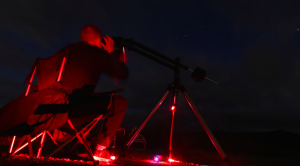 What transpired was I sat speechless for a few seconds as the sight started to soak into my eyes. The Moon, that us humans are so used to admiring from a distance, was now so visible that I could pick out every single nook and cranny. Each crater was laid out in plain sight and the word 'mind-blowing' does not do the experience justice. I could have sat there for hours not even turning my head, just staring at this giant yellow ball hanging in the sky. While I was taking it all in, I made a comment about how cool it was that 50 years previously, on that very day, Neil Armstrong and Buzz Aldrin were taking mankind's first steps on the Moon and now here I was looking at its every detail. Sure, like most kids I was interested in space back in the day but as of that very moment I am now proud to call myself a space nerd. 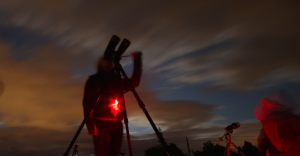 After I reluctantly got up to give Sarah-Jane a turn, she slowly mouthed the words "Oh. My. God," to which Ramon responded "This is why I do this. The reactions of the people." Everyone present pretty much reacted in the very same way and as the minutes passed, we all got a few more chances to have a look, a definite benefit of having a small group.

All the while we were craning our necks, we were enjoying this shared experience and enquiring about when the next meet-up would take place. It was getting close to 1.30am when we finally thanked Ramon, his colleague Chris and the talented photographer Jason (whose images can be seen throughout this article) and said our goodbyes.

Galactic Wicklow is the new stargazing experience you that didn't know they needed. It's guaranteed to leave you absolutely breathless and once you've done it once, you'll be coming back for more.

So how can you get involved?

As mentioned previously, Ramon and the team can only inform people a few days in advance when they know they will have a clear night. You can keep up to date via the Facebook page here and once you've gotten in touch, Ramon will add you to a list for the next outing. 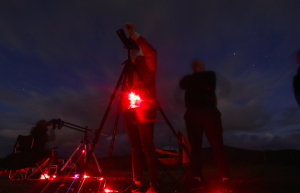 The fee is currently €45 per person but given that the company is still in its infancy, different price points are still being worked on. Ramon is also aiming to roll the experience out nationwide and recently a tour took place on Actons Eco Beach in Connemara.  The guys are also hoping to set up Airbnb experiences when the time is right.

It takes a lot for me to say that something should jump to the top of your Irish bucket list but if I had to pick something then Galactic Wicklow would be it.

Whether you have a passing interest in space or are a full-on galactic explorer, the experience is something that will live long in the memory. In the meantime, keep watching the skies.

READ NEXT: We Stayed In The Beautiful Bubble Domes In Finn Lough And It Was Amazing

There's a Christmas Market in Wicklow and they have alpacas

A spectacular family-friendly stargazing event is taking place this weekend