Paul Mescal has addressed the articles that have described him as British since his Emmy nomination was announced yesterday.

Normal People star Paul Mescal was the subject of much media attention yesterday (what's new?) after it was confirmed that he'd been nominated in the Lead Actor category at the 2020 Primetime Emmys.

Unfortunately, as is so often the case when Irish people achieve success, some British publications have declared Mescal as one of their own when we all know that he's as Irish as the GAA shorts he wears so well.

His post has seen Irish Twitter rejoice, with celebratory gifs and memes flying around like nobody's business. Mescal himself has reacted to this one by Virgin Media's Richard Chambers comparing the tweet to an iconic Euro 2016 moment involving Robbie Brady... 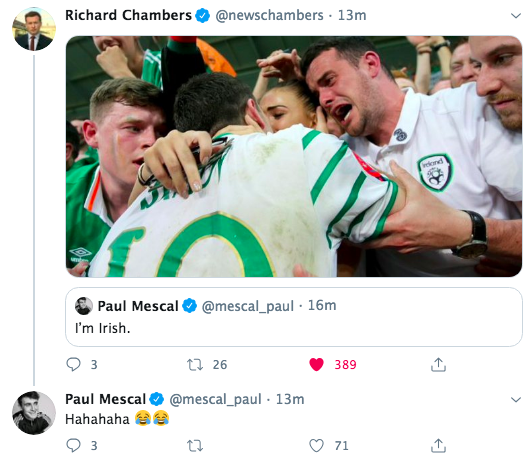 Well, that should definitely close the book on any inaccurate claims that Mescal isn't Irish. Until it inevitably happens again, that is.

READ NEXT: These are the two Normal People episodes that have been nominated for Emmys