Yesterday, the Central Statistics Office released a load of interesting facts and figures about living in Ireland. As part of the Regional SDGs report, it was revealed that people in Dublin binge drink more than those any other county and another interesting segment reveals the average price of rent in every part of the country.

In what will come as no surprise to anyone whatsoever, Dublin has the highest average weekly rent price at €279. This contrasts sharply with Leitrim where renters pay and average of just €99 per week.

The full table of average weekly rents across the country can be viewed below. 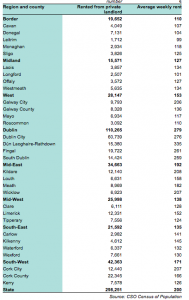 The full CSO report can be found here.

READ NEXT: TripAdvisor Has Ranked The Top 10 Beaches In Ireland For 2019

WATCH: Claire Byrne outlines what to expect in pubs from next Monday