When planning a trip to the Far East, it's usually cities like Tokyo, Shanghai and Hong Kong that spring to mind but there's one other spot that tends to slip under the radar.

Seoul has the perfect blend of rich history, culture as well as amazing food and having lived in South Korea for close to five years, I was lucky enough to visit the capital on numerous occasions.

While I loved calling the smaller city of Daegu home, those weekend trips to Seoul provided some of the fondest memories of my time in the country, particularly when my family came over and I got to show them around one of the largest metropolitan areas on earth.

If you ever find yourself in that neck of the woods, taking a few days to stop in Seoul is something I'd highly recommend and because I'm just that sound, here's a four-day itinerary I put together to help you on your way. 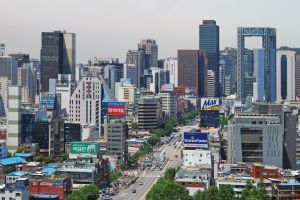 After checking into the Hotel Skypark in Myeongdong, the first thing you should do is get to know your surroundings.

Myeungdong is one of Seoul's main shopping areas and will give you a fair idea of just how lively this city is. Neon lights and blaring K-Pop provide the backdrop as locals and tourists dash about, sampling street food and purchasing necessary items such as Super Mario socks and oversized Hello Kitty phone covers. 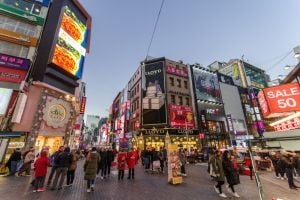 The area is mostly pedestrianised and visitors can pose for photos with giant cartoon characters such as Snoopy and Spongebob. The energy of the place means that it won't be long before you'll need to rest your weary legs and Myeungdong isn't short on coffee shops and places to try traditional Korean cuisine, which brings us to lunch and your first bowl of Haejang-guk.

Haejang-guk literally means 'hangover soup' but you don't need to have over-indulged in order to enjoy its benefits.

The dish is a mix of meat and vegetables served in a hot broth and while it has a little bit of a kick, it's the perfect meal to kick any lasting jetlag out of your body. 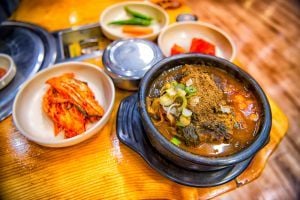 Once your belly is filled, it's time to check out Seoul from above. Standing 236 metres above ground, Seoul Tower is the perfect viewing point for visitors to take in just how massive this sprawling city is.

Located at the top of Nam Mountain in the centre of Seoul, the attraction is easily accessible from Myeungdong and visitors have the option of walking to the top or taking the cable car.

Once at the top, you'll be able to enjoy stunning views of the city and the surrounding mountains, erasing any doubts of just how massive the place is. 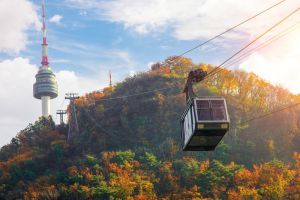 Breakfast is the most important meal of the day and fittingly the Koreans know just what they need to kick off the morning. Rice.

Whether it's breakfast, lunch or dinner, whatever you're eating will generally be served with a bowl of rice. Korean breakfasts range from the sushi-like kimbap to kimchi-jigae stew to soups such as the aforementioned haejang-guk, and they'll all typically have some rice to accompany them.

To get the most out of the Korean culinary experience, you should definitely head into one of the hundreds of traditional Korean food joints you'll pass on your way. If for some reason you don't fancy it though, there are plenty of European-style bakeries where you'll pick up a sandwich and a cup of coffee.

Now that's out of the way, it's time to head north of the border.

Seoul is located in the northern part of the country, making it an ideal base for a guided tour of the Demilitarised Zone (DMZ) between North and South Korea. Despite the fact the Korean War came to an end in 1953, the countries are still technically at war as no peace treaty was ever signed. These tours will provide a fascinating insight to the conflict that divides families to this day.

You'll hear heartbreaking personal stories of relatives who haven't seen each other decades, save for a few reunions which take place at the border. You'll also be taken to Dorasan train station which used to connect the two countries but now serves mostly as a symbol of the hope of eventual reunification.

The border region is just about an hour's drive from the centre of Seoul and there are a number of options for full and half day tours, many of which include lunch or dinner upon return to the city.

Just remember, if you're asking around, it's pronounced 'DM-Zee' not 'DM-Zed'. Just one example of how us Irish folks have to Americanise our English on visits to Korea. 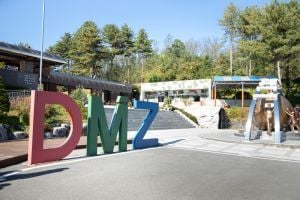 Nothing works up a hunger like visiting one of the most heavily-guarded borders in the world. Time to experience dinner, Korea-style.

Sharing is caring in the Land Of The Morning Calm and this applies at dinnertime more than any other setting.

Korean BBQs are something you might have experienced at home from time to time but in their country of origin, they're very much a nightly ritual. Firstly you order your meat, with common options being bulgogi (marinated beef), galbi (grilled ribs) or samgyeop-sal (pork). You'll then be handed all your sides (rice, obvs and plenty of soup and veg) and will generally be left to cook up your meat at the table as you please.

If you're feeling a bit self-conscious about cooking in a restaurant, don't worry. Helpful staff are usually on hand to spot any nervous-looking foreigners and will step in as necessary.

Korean BBQ joints aren't hard to find and in any built-up area you'll never be far from the smell of frying meat. Dinner is basically a social occasion in Korea and anywhere you go, you'll be surrounded by groups of friends, families out together and youngsters kicking off their night out. 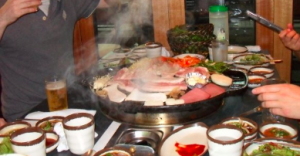 Rise and shine because you're coming face to face with royalty today. Well, sort of.

Gyeongbokgung Palace dates as far back as the 14th century and is the main royal palace of the Joseon dynasty which lasted for five centuries until it was replaced by the Korean Empire in 1897.

The site stretches over about 40 hectares and is very much a city within a city. With dozens of ancient buildings to look upon and admire, you can easily spend two or three hours here and there are plenty of photo opportunities for those much-coveted social media likes. 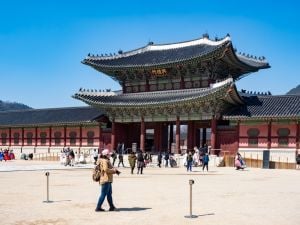 After that's done, you've probably worked up a hunger again. Seoul's street food culture is ideal for grabbing some grub on the go and no matter what corner of the city you're in, you'll be able to pick something up.

Everything from kimbap, to tteokbokki (spiced rice cakes) to mandu (Korean dumplings - my personal recommendation, unreal) are readily available and won't cost more than a couple of quid in European money.

If you're feeling particularly adventurous, be sure to try the beondegi (boiled silkworm pupae) or other insects you might spot on various food stands!

You've probably heard a lot about relations between North and South Korea and your stint at the DMZ will have provided you with plenty of information about how the Korean War unfolded.

With that in mind, your next port of call should definitely be the War Memorial Of Korea. A couple of hours could be spent wandering around this museum, learning everything about the origins of the war to present-day relations. 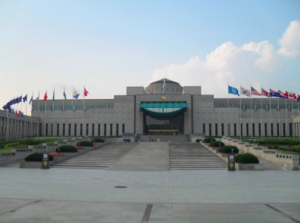 While you would have had the benefit of a tour guide at the DMZ, the War Museum is good in that you can stroll around at your own pace, taking in the story of the most divided peninsula on earth. The best part? You get to climb into cool tanks and planes outside. 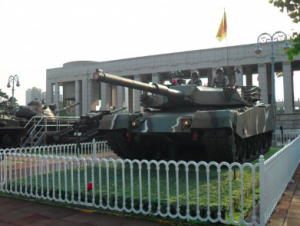 After three days of sightseeing, you'll have earned a decent night out and Seoul's nightlife has plenty to offer.

The Itaewon area is a short walk from the museum and here you'll find the most popular bars and clubs among the expat community. If you're in the mood for another BBQ, you'll want to accompany it with some soju, Korea's national drink.

Soju is an important part of dinnertime culture in the country and if you sit in any restaurant, you're sure to spot groups of diners necking shots from the small green bottle as they gradually become more merry. Be warned though, if you overindulge, the hangovers are the stuff of legend. 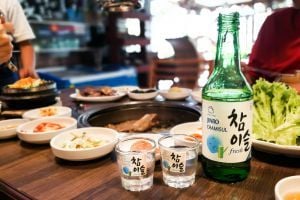 If you manage to make it after dinner, Itaewon is heaving with sports bars, nightclubs and if you feel like a taste of home, The Wolfhound Irish pub has been a staple of the area for a couple of decades now.

Should you feel like venturing further afield, hop in a cab to Hongdae where you'll find a loud and vibrant neighborhood filled with music bars and noraebangs, the go-to nighttime activivity for Koreans of all ages.

Literally meaning 'singing room,' noraebangs are the place to go if you feel like belting out a few karaoke tunes. You can hire a private room depending on the size of your group, much like the karaoke rooms you may have stumbled into on Dublin's Capel Street on a night out. In Korea, they tend to stay open all night and don't be surprised if you emerge at 5am wondering where the time went. 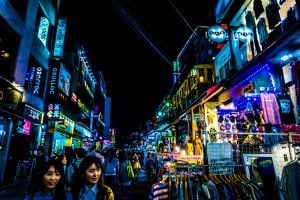 Hungover? Sounds about right. Getting your kit off and heading to a jjimjilbang will cure what ails ya.

Jjimjilbangs are basically massive public bathhouses containing hot tubs, saunas, heated floor rooms, and everything else you need to sweat your excesses out.

While being in the nip around strangers is not something we're used to on this side of the world, in Korea, jjimjilbangs are another standard element of everyday life. Open all night, many Koreans use the buildings to catch some shut-eye, particularly business types who may be looking for a cheaper alternative to staying in a hotel.

If you are a bit on the shy side, don't worry. Many jjimjilbangs will have fully-clothed versions and the ones where nudity is allowed are always gender-segregated. Eyebrows are always raised whenever anyone hears about these places but after a few days in Korea, you'll know that what seems like an eccentricity to us is as regular as a heading to the gym for them. 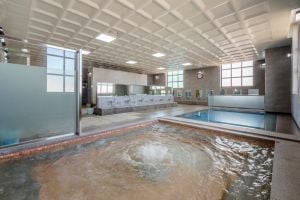 Seoul is in many ways a hidden gem for anyone embarking on a tour of the Far East and while it's impossible not to be taken aback by the sheer size of the place, four days should be just about enough to cover everything you need to see and do.

Since I left Daegu in 2014, I've been lucky enough to return for a friend's wedding and made sure I took in a trip to the capital while I was there.

It's somewhere I'll be looking to return to a few more times in the future and once you've been you'll see why. There's probably plenty of other great things about Seoul that I've forgotten to mention but that will just give me an excuse to provide another update down the line.

You'll have the Gangnam Style dance down to a tee once you've left!

READ NEXT: Five Days In Morocco – An Exotic Getaway Ideal For Adventurous Couples

New changes to Airbnb as bookings pour in for the summer