After a long summer of festivals between Ireland and the UK, including the month-long marathon that was the Edinburgh Fringe Festival, I found myself back in my home city of Dublin ready to do it all over again with an autumnal tour around Ireland and Europe.

I had done 83 shows in August of this year alone and I was as run down as I could possibly be. I was just coming off a two-week bout of antibiotics to fix what seemed like a forever cough, Electric Picnic (which also coincides with my birthday each year) and the first Friday night Stradbally sesh in the woods giving me the final kiss of death. I had to dig deep for stage energy to do my set on Saturday but I got through it - I think the four coffees helped. I started eating more healthily, went back to the gym and tried to make up for the distinct lack of fruit and vegetable consumption in Edinburgh the month previous. The experiment that began early last week was simple: “Go completely vegan for one week while on the road and then write about it”. As we all know, nothing in life is easy. I had a few days in Dublin to acclimatise to my new vegan life. I’ve eaten vegan meals a few times but it was always by choice and when it was convenient, this was going to be different. I chatted to some vegan friends and asked what they liked for breakfast and lunch, what they snacked on, and most importantly where I could grab vegan food on the go before and after gigs in town. Dublin city has loads of options, a few places to get some quick vegan food on the go were Leon , Sprout & Co and Cornucopia. If you want something a bit more fancy and not so much in a rush then Sova Vegan Butcher is a great shout

Breakfast was the first thing to tackle. I love breakfast and eggs probably more than anything else in the world so this was going to be the most difficult thing for me. I bought some soy-based yoghurts and some vegan-friendly bread (no milk/egg-based stabilisers in it) that could be toasted and topped with avocados, sauteed mushrooms or some tomatoes and good olive oil. You can make decent overnight oats with oat milk and top that with whatever fruit you like. The bags of mixed berries in my freezer were finally getting their time in the sun. There are also some vegan bars which are basically just squashed fruits, dates and nuts that are really handy and taste okay. Dates dipped in peanut butter is a great snack or quick breakfast for energy too. Vegan breakfast while at home in my apartment was easy, if you’re out and about just swap your take out coffee's milk for oat/coconut/soy and you’re good to go, or better yet just have an americano.

Next up was lunch, I try to eat lunch at home when I can. I had to get my car’s NCT done last week, the glamour of adulting.  While it was up on the scrutiny ramp in Deansgrange I went to Supervalu there to pick up some vegan fare. I don’t live near a Supervalu so I always feel like I’ve imposter syndrome when I’m in there, the fact that it’s so busy this early in the morning re-enforces the fact that we’ve lost the run of ourselves here in Dublin once again and are well and truly on the notions train of self-destruction. I got the usual breakfast suspects of fruit and some almonds and cashews to snack on, but it was the vegan cheese that had caught my eye. I had tried vegan cheese at a barbeque in Australia (classic) and it was one of the worst things I’ve ever tasted, but that was years ago and I was willing to give it a second chance. I bought vegan cream cheese and some vegan sliced cheese and headed home with my car that had miraculously passed the NCT with flying colours. 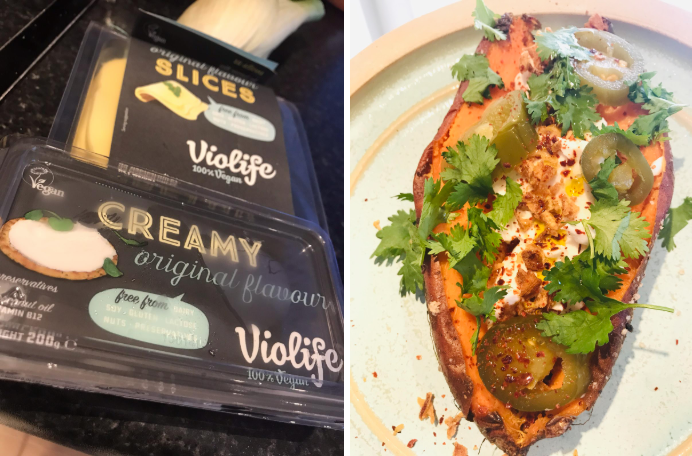 We need to talk about vegan cheese. I really gave it a good go through various consumption mediums and it is quite simply, not okay. The vegan cream cheese I bought tasted like white paint, even stuffed in a baked sweet potato with loads of toppings it was still so so grim, no. The vegan cheese slices look and have a similar texture to sliced Edam, except they are pretty flavorless, I melted them on some vegan bread and it just looked like melted plastic, it tasted alright but still not great, I read the back and the slices are made of about 50% water, 30% oil and a serious amount of additives. There are some foods that cannot be vegan, cheese is one and cheese is life for me.  Also, they are about €4 per pack, You could buy a lot of fruit, veg, legumes or nuts with that.

I was on tour all weekend in Europe and this is where the real challenge would be. I had to attend a good friend's stag party in Berlin on Friday first because what would life be if it was easy. Luckily, Berlin is a mecca for vegans. The German capital is awash with options everywhere so it was actually even easier than Dublin to maintain. Even for late-night junk food, the legendary Berlin Kebab shops have great falafel kebabs and if you replace the garlic sauce with chilli and add more salad you are sorted. The first bar we went to at 11 am to catch a bit of the opening game of The Rugby World Cup even had a tofu burger option that I skillfully hid behind my Guinness (which is now officially vegan FYI)  for fear of ridicule from the rest of the group. A mango sorbet Saturday morning hangover cone was a great choice the next day as I headed for the airport for shows in Luxembourg. It’s also worth mentioning that if you’re hungover or traveling that Doritos (Spicy Sweet Chili–Flavor) Tortilla Chips, Skittles, Pringles (Original flavor) and Ritz crackers are all vegan, you’re welcome.

Luxembourg is a beautiful city steeped in history but it’s not a great city for food, especially vegan food. I had one of the saddest vegan burgers of my life here topped with the dreaded vegan-friendly ‘cheese’. I knew that wouldn’t be the last I saw of it! I  mainly survived from snacking on hotel fruit and some snacks I’d smuggled from Dublin. I was hungover after Berlin and starving and the only thing I could find at the airport that was suitably vegan was an orange juice and a packet of vegetable crisps that cost me €8.50. That’s 50 cent more than the vegan cheese that tried to ruin my life. I had some vegan take away noodles after one of the shows and it was basically wheat noodles drowned in soy sauce with some grated carrot; I was looking forward to the next shows in The Netherlands for the food options alone! I had one amazing ‘Vegan Buddha Bowl’ in a place called Urban Bar that was exceptional and probably the best vegan breakfast of my week so Luxembourg won some vegan brownie points there.

The last leg of my tour was in The Netherlands, it’s a five and a half hour journey on three trains from Luxembourg through Belgium. Eating vegan can be difficult at train stations, particularly in Belgium, you have to sift through the sea of meat and cheese-filled carbs and resist the tempting displays but if you look hard enough, you’ll see them. I had some Super Nature snacks in my bag which got me through, they are an amazing Irish company and are the best vegan snacks that I found. They are all gluten-free, dairy-free, refined sugar-free and they all taste amazing. An absolute winner for vegans out there.

The last leg of my mini Euro-trip was in Eindhoven, a really cool vibrant student city that is rated one of the world's smartest cities’ with a huge amount of tech companies operating out of there. Like Berlin, it has some great vegan options, I had my first ever vegan pizza here, it was without vegan cheese thankfully and it was good! Before I flew back to Dublin on Tuesday I had one last vegan meal on the continent before I headed home. Google led me to Vegan Heroes close to where I was staying. Famed for their vegan fare I gave their legendary ‘Hambourgini’ a try. The ‘beyond meat’ patty is juicy and delicious and the burger is packed with a variety of crispy and fresh vegetables with their signature "Faith Like A Mustard Seed" sauce that I must learn the recipe for. All packed inside their bright beetroot pink vegan buns, this is one of the best burgers I’ve had all year, not because it was vegan, but because it was seriously delicious.

I finally got back to Dublin after a delayed flight from Eindhoven. I was shattered after a long week and a serious amount of traveling. I had a show in Dublin that night so I went home briefly to dump my bag, showered, changed, had a soy yoghurt and headed into town for one more show. My vegan week was over.

It was a hectic week but a relatively normal week for me given my career choice, I’m always on the road. I’m glad I went vegan for the week, it opened my pallet up to a whole new world of things I probably would never have tried. It also made me very conscious of the amount of animal products I consume and if you’re a hardcore vegan or a carnivorous meat-eater I think we can all agree that at the very least we need to eat less meat and try to help the planet out. Greta is angry with us and she has every right to be.

Being vegan takes a bit more effort and planning, some products are more expensive but some are also incredibly cheap if you make some meals at home. Daal lentils are amazing and you can pack them with as many or as little spices as you like, have it with some beans or veg and brown rice and you have a hearty meal. Give being vegan a go, even if it’s only for a meal or two, you’ll be glad you did... unless you try the cheese of course.