It seems that every social media platform serves a particular purpose and most use Twitter to keep track of what's going on in the world.

There was no shortage of goings-on this year and research has shown exactly what Irish people have been tweeting about since January.

Unsurprisingly, #Brexit topped the list in terms of Irish news tags and international news tags. Filling out the top five of Irish news hashtags were #ClimateStrike, #LE19, #StormLorenzo and #Budget2020. 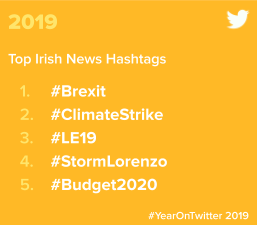 Twitter-users often use the platform to spread thoughts and raise awareness on social issues and 2019 was no different, with climate change proving a huge talking point throughout the year.

Campaigns such as #20x20 garnered significant traction on the social media platform while Laura Brennan was honoured with the #ThankYouLaura hashtag. The homelessness crisis was discussed using #RaiseTheRoof and the campaign against Direct Provision was also quite prevalent. 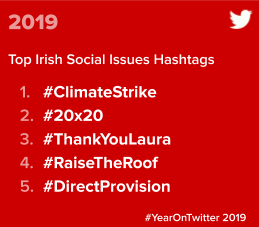 Away from social commentary, sport and entertainment continued to be discussed at length and the below images show what people in Ireland were tweeting about most this year in those categories. 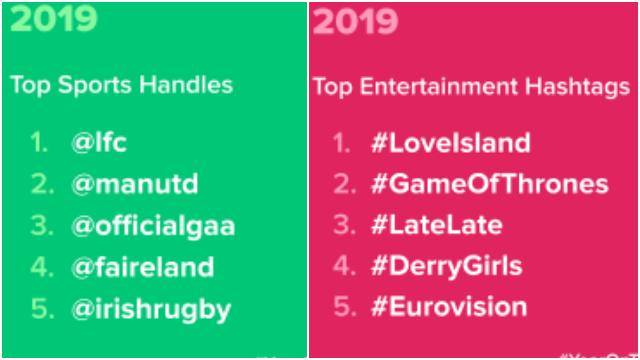 Musicians like Lewis Capaldi, Lil Nas X, Liam Gallagher, Ariana Grande and Hozier endeared themselves to Irish fans judging by the amount of attention their tweets got in Ireland.

And in terms of the most retweeted and liked tweets of the year, here are five of the best from 2019.

"I hear people talking as if this country owns Ireland.

"Ireland owes this country nothing."

Bonnie Greer on Newsnight is going to be VERY popular on this side of the Irish Sea.pic.twitter.com/ec5fA1HyLS

I am now retired from playing football

What a grueling and amazing night at MSG! Dream come true to come away with all the belts. It was a very close fight but mission accomplished! Thanks so much to the fans for all the support. Today is a day for celebrating with family as UNDISPUTED! pic.twitter.com/xKsSsT6Xjr

Please retweet. Looking for social media help please.
Has anyone seen my son Paul in around Hale, Manchester , London or any airports in the past few days? Police have been informed but we are very concerned and someone somewhere might have spotted him #thankyou pic.twitter.com/qebz5ks9MA

Amy and Brian return to wedding venue for 10-year anniversary

Taoiseach says July 20 reopening of all pubs could be delayed