Google Trends has revealed Ireland's 10 most Googled questions about the lockdown and they all revolve around when things will be reopening.

The stats were pulled from the last week of searches and they confirm that increasingly hirsute Irish people have one thing at the top of their priority list - when the hell are the hairdressers going to open? As some of you will know, that magic date is currently scheduled for July 20 but there have been calls to bring it forward to June 29. "Here's hoping," says you, pulling your fringe away from your eyes for the 50th time today.

Unsurpisingly, "when will pubs open in Ireland?" is the next most Googled question. This is another industry that is asking the government for a rethink and you can read more on that here.

Next up is "when will golf courses open?" and with some planning to do so during phase 1 of the roadmap on May 18, there should be plenty of golfers satisfied. It's the shoppers who are the next most concerned, with "when will Penneys open again?" coming in fourth place.

The full list of Ireland's most Googled questions during the lockdown can be viewed below... 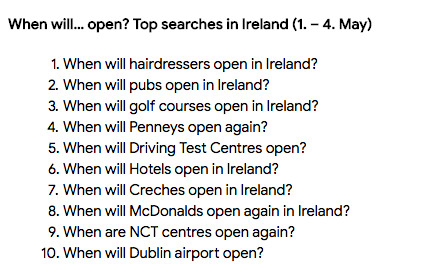 Eventually, we'll all be sitting in the airport with a pint, scoffing a McDonalds, having had a fresh haircut.  The dream. More information about Ireland's roadmap plan can be found here.

WATCH: An American website has covered the McCarthy/Keane Saipan "beef" and it's gold

RTE and TG4 have a fine selection of movies tonight but which of the three should you watch?