It was the summer that the nation came together like never before and now we can celebrate our Italia 90 adventure by reliving it all while staying apart.

TG4 has confirmed that it will be showing  Ireland's games at the 1990 World Cup, 30 years on from the summer that is simply referred to as 'Italia 90'. Starting on Friday, May 1, viewers will get to relive the opening encounter with England which kickstarted our journey towards the last eight.

In what will be seen as a wise move, the station has decided to skip the famously turgid second game with Egypt which ended 0-0 and none of us should ever speak of again. Ireland's final group game against the Netherlands will be shown on Friday, May 8 before the piece de resistance takes centre stage on Friday, May 15. Strap yourselves in and cheer us home as (spoiler alert) Packie Bonner secures his status as the owner of the safest pair of hands in Ireland as we overcome Romania in the last 16.

Then, on Friday, May 22, the focus will be on our glorious exit against a Toto Schillaci-inspired Italian side. The fast-forward button will be hit to 1993 on Friday, May 29 as we relive our famous win over Northern Ireland which sealed qualification for USA 1994.

Friday, June 5 will see another iconic moment as Ray Houghton delivers revenge on the Italians in the Giants Stadium before Northern Ireland fans are treated to their famous 1982 win over Spain on Friday, June 12.

Throughout the rest of June, viewers will see classic games involving Argentina, England and West Germany and with more games set to be announced, all of our Fridays are sorted for the foreseeable future.

Check out the full schedule below courtesy of TG4... 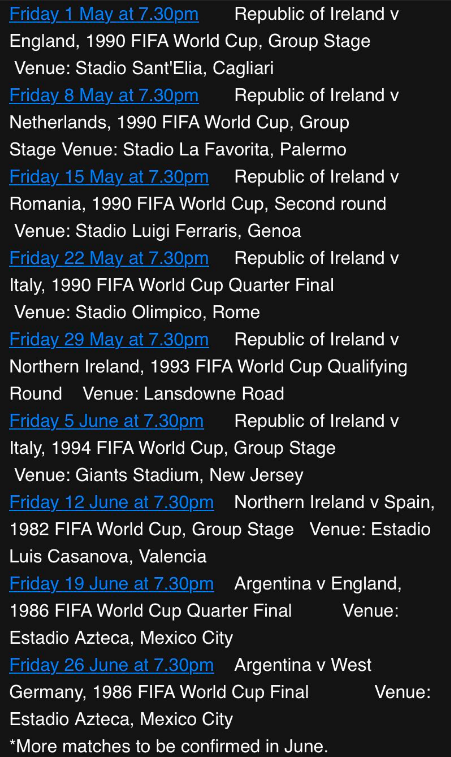 What a way to be transported back to a time when we could all embrace and enjoy these momentous occasions. Oh, go on then, for old time's sake...