Last week, The Script announced two 3 Arena dates along with a date in the SSE Arena in Belfast.

The announcement came ahead of the release of their new album Sunsets and Full Moons next month.

Now, the band have announced a third and final date. Before they play the 3 Arena stage on Friday, March 6 and Saturday, March 7 2020, they'll also take to the stage on Thursday, March 5. 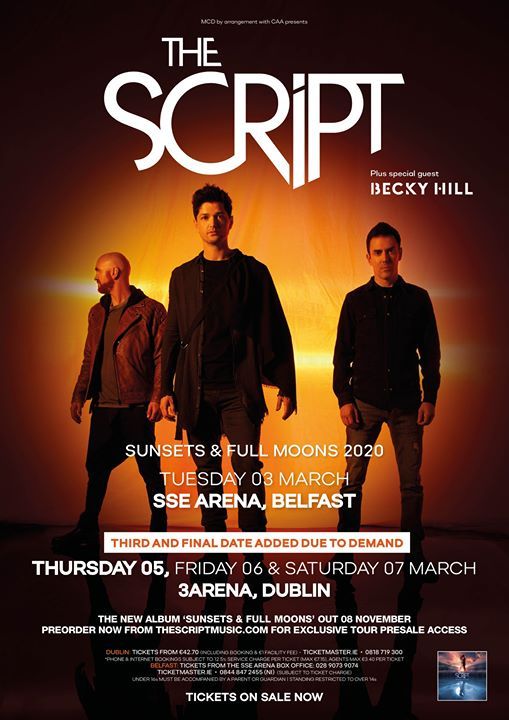 Earlier in the week, the group also announced their support act for the UK and European leg of their tour.

UK singer Becky Hill, who is known for appearing on tracks such as Sigala's Wish You Well and Back & Forth with MK and Jonas Blue will open for the band.

She took to Instagram on Tuesday to express her excitement, writing, "full circle moment for me as I'll be joining @thescriptofficial on their 21-date UK & European tour in 2020!! make sure u get down early to see my set, thank u so much for having me!!".

full circle moment for me as i’ll be joining @thescriptofficial on their 21 date uk & european arena tour in 2020!! make sure u get down early to see my set, thank u so much for having me!!

Tickets for all shows are on sale now at Ticketmaster.ie.

National hosepipe ban could be lifted earlier than first expected

Cork restaurant blown away by support following no show bookings