It felt very much like your first day at a new school when I was introduced to Cork comedy.

You had plenty of friends in your old school, you had a routine in place and you felt settled in your weekly schedule.

I walked up the steps in the Roundy on Cork's Castle Street in late July, 2018 not knowing what to expect.

It was an hour before showtime of the CoCo Club's weekly open mic and like a nervous schoolboy refusing to let go of his mother's hand, I encouraged my girlfriend to go through the heavy, awkward upstairs door first.

I had done comedy maybe 20 times in Dublin up to that point but decided to move back to my native Cork last summer and having been bitten by the stand-up bug in the big shmoke, I had to at least try getting up on stage in my home city. 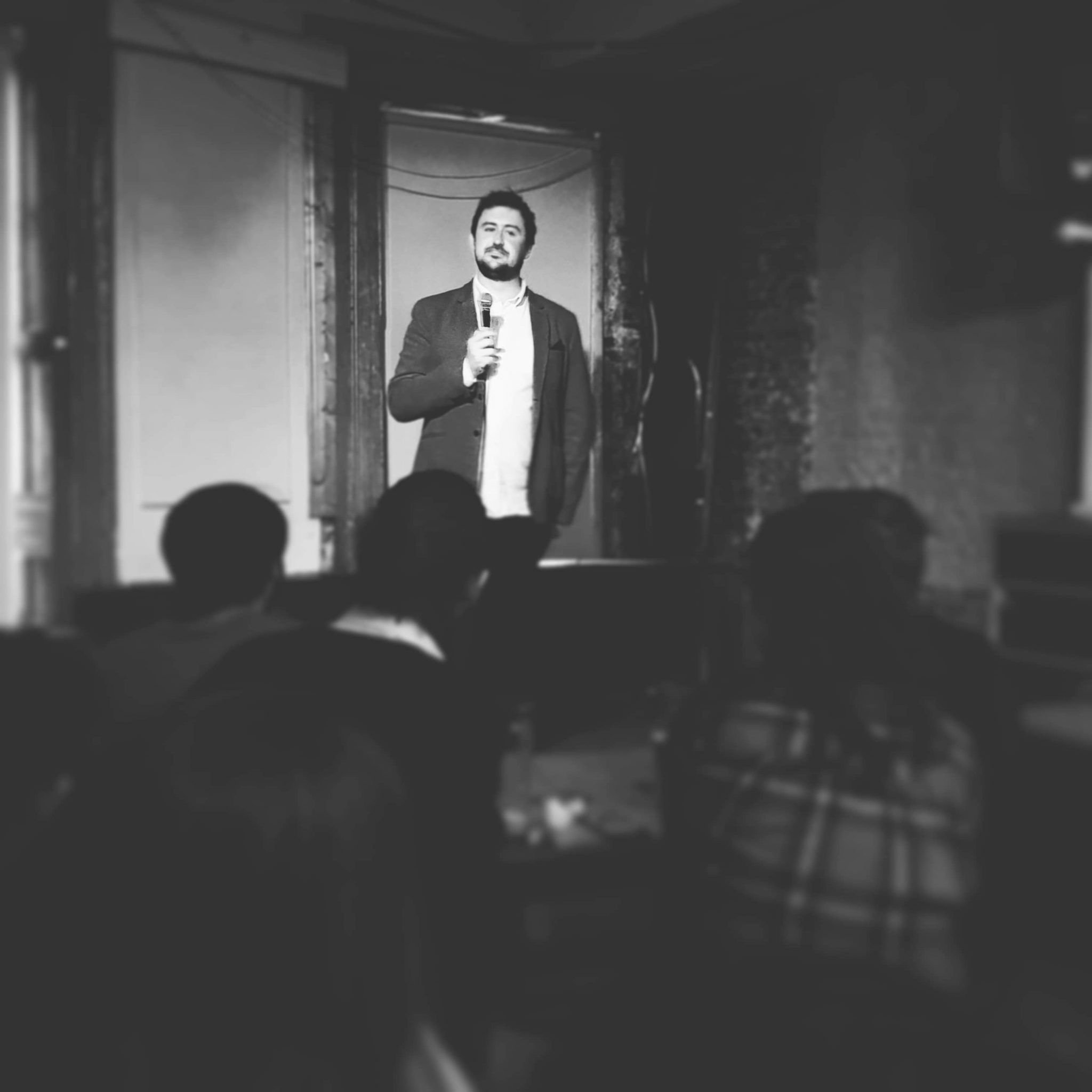 On stage at the CoCo Club

I sat down in the second row with my girlfriend and glanced back at three or four guys standing at the corner of the bar, who were so immersed in their own conversation that they initially hadn't noticed us walking in.

"Story lads, ye here for the show?" one turned and asked.

"Oh you're a comedian? Fuck me. Of course you can, boy. What's your name?" came the response.

The guy I was talking to was a Waterford comedian named Jack Hourigan, who was hosting the show and was visibly delighted to see a new face. 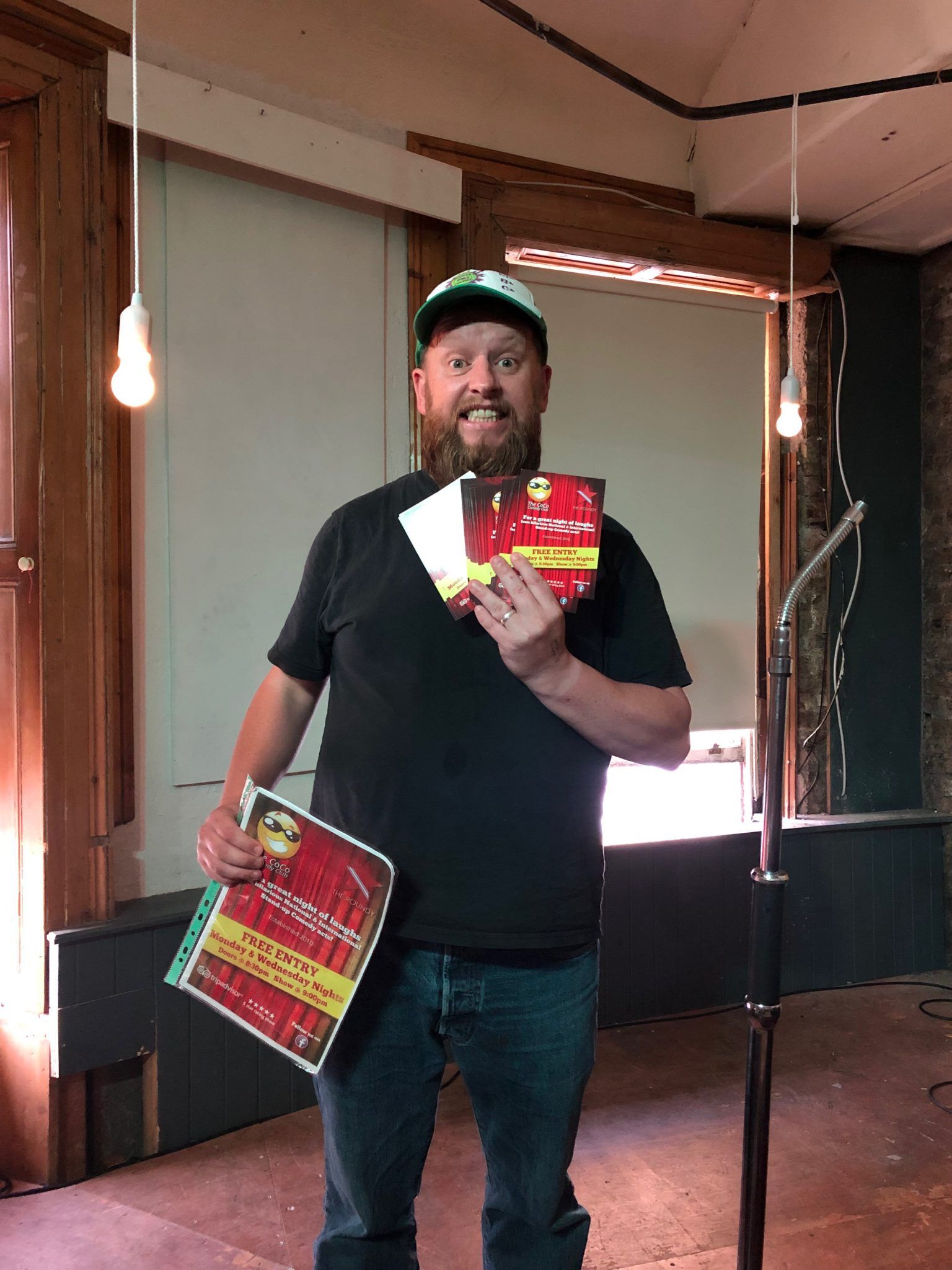 It was clear from the show, which was performed to an audience of maybe 20 people, that there was a thriving comedy scene in the Rebel County in terms of the quality of the comedians on the stage.

The next few months were spent just trying to get stage time which, while not as difficult as it was for a newcomer in Dublin, still came at a premium.

There was an open mic most Mondays in the CoCo Club which I did my best not to miss. Then there was one every month in the back of a bar on the south side of the city called Coughlans.

It was different variations on the same sex-with-my-girlfriend joke for the most part but then something different came along in the form of a weekly show called Tree Fiddy, which was started by Richy Sheehy and Jack.

I reached out to Richy, who you will probably know from the viral Mohamed Salah song from early 2018, and he invited me along to perform at the first show, which would see several comedians perform sets featuring freshly written jokes on that week's theme and the audience would pick the best joke of the night. 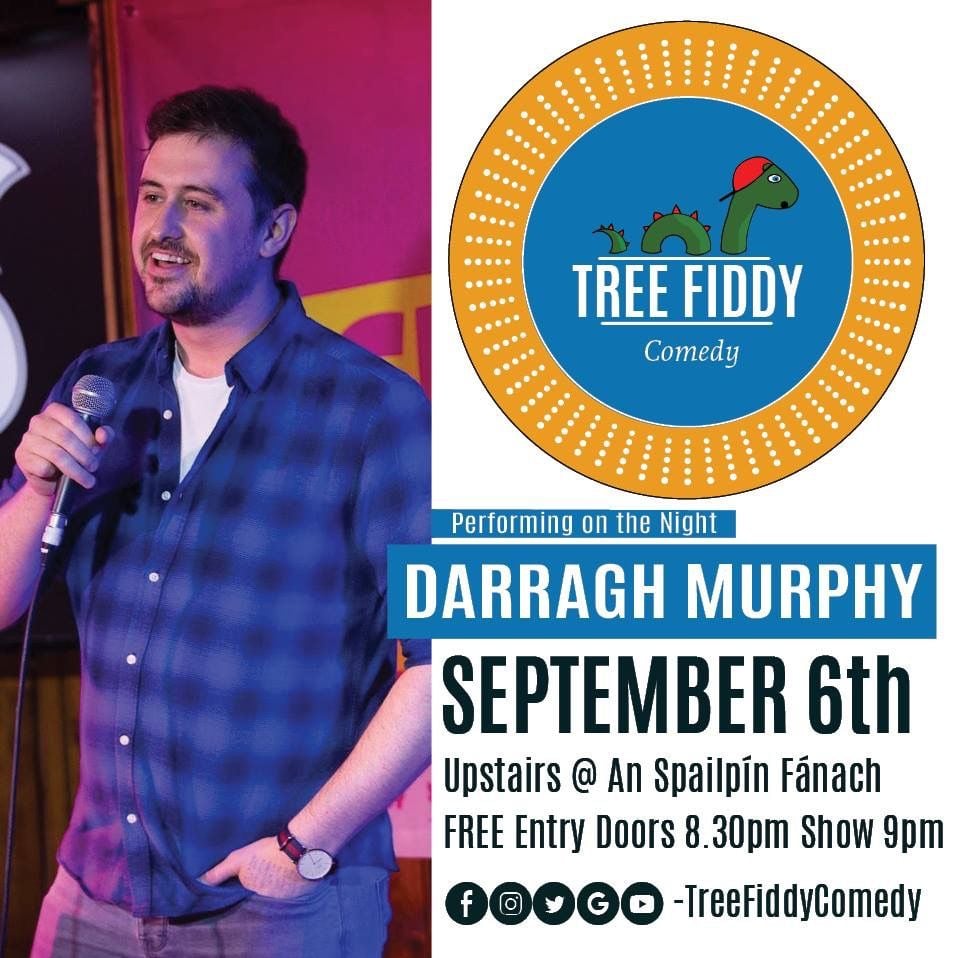 I loved the challenge of writing on a very specific subject and penned a brand new five minutes dedicated to controversial comedian Louis CK, who was in the news and therefore announced as that week's theme.

Thursday night came around and somehow, I won.

Richy put a plastic medal around my neck and as stupid as it sounds, it was probably the highlight of my year.

The show only ended up running for five or six weeks, I won another medal and Jack joked that I was Tree Fiddy's first regular.

It was the most fun and not just because I wasn't bombing terribly but because I could hear the other comedians in the room starting to laugh at my jokes. That was the first time that had happened.

2018 came to a close and I made a couple of resolutions. Not 'I'm going to sell out Cork Opera House in 2019' level resolutions but more just to perform more regularly and maybe get some spots on the Wednesday show in CoCo, which was reserved for more established comics.

2019 began in much the same way as 2018 ended - minus Tree Fiddy - but then, in March, a whirlwind six months of what my girlfriend would describe as "too much comedy" began. 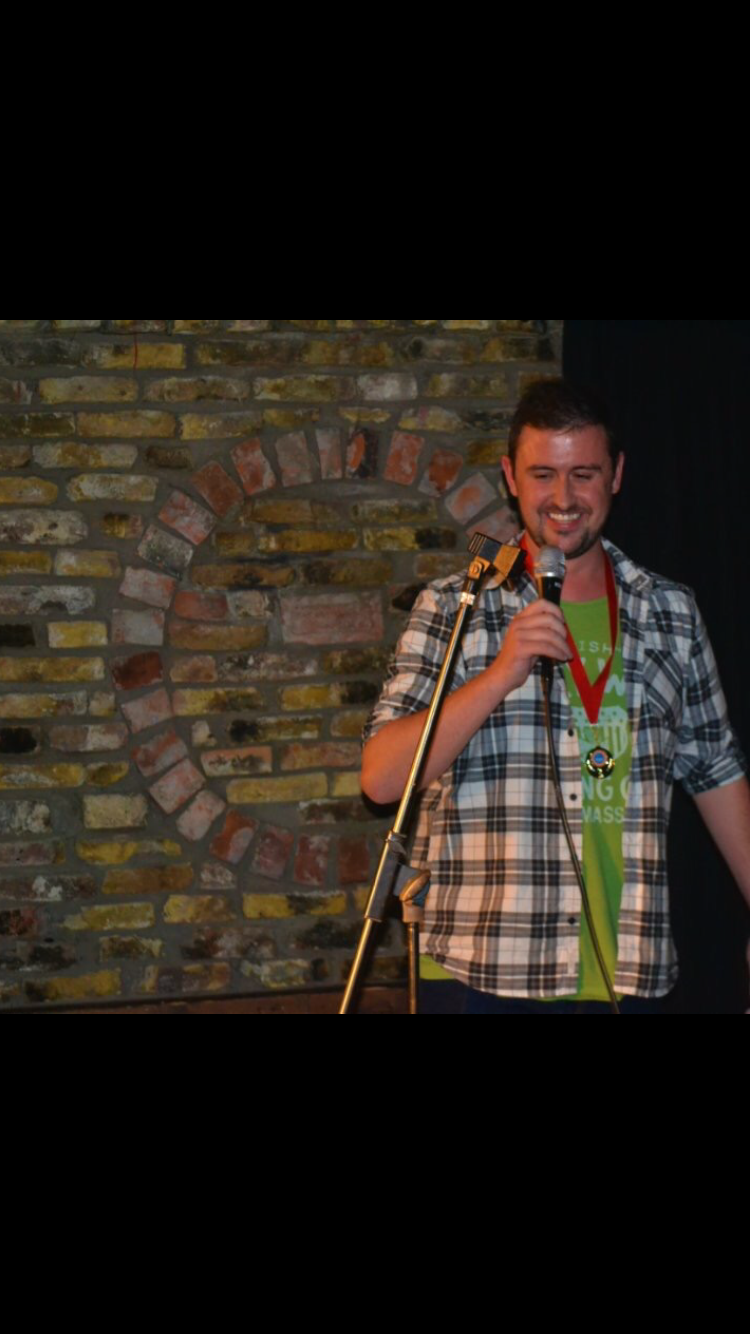 I was asked to take part in the CoCo Club's Newcomer of the Year competition and didn't get past the first heat because, I dunno, politics or something probably.

But the next night, I was invited by CoCo Club founder Cornelius Patrick O'Sullivan down to Killarney to perform at his Kingdom Comedy Club.

From that point on, I essentially didn't perform any less than three times a week and the gig offers came thick and fast.

For that, I have Cornelius to thank because that bearded lunatic of a man took me under his wing in a way that I will forever be grateful for.

It was at another Killarney show that Mike Morgan, a Mallow man like Con (Cornelius), asked me to do a short set at his big homecoming show in the North Cork town.

It wasn't until I arrived at the 300-seat venue that I was told that I may have to host the show because Con's wife was due to go into labour any second.

I laughed at the mere notion of an inexperienced comedian like me being entrusted to MC such a massive show. Con assured me he wasn't joking.

Every time Con would check his phone in the green room, I would have a minor panic attack but thankfully showtime arrived and there was no word of a baby. Con went up and did some time before he brought me up for my seven-minute spot.

Mark O'Keeffe went up next and then there was a break. And with no news from Con's wife, I asked if I could leave and make the 35-minute trip back to the city for a party.

I didn't check my phone again until around midnight that night, when I opened Facebook and saw a picture of Con holding his newborn son, who had rudely decided to arrive on earth moments after I left the venue and Mike had gone on stage. Fortunately, another comedian named Sinead Walsh was on hand to tie up the loose ends after Mike finished his hour and Con didn't hate me too much for bailing (I think).

Con and I got closer over the next few weeks, in fact, and Mike also began asking me to do some short spots at his new show The Wonky Donkey Comedy Club which, for my money, is held in the prettiest room in the country.

I'll never forget one of those Wonky Donkey Fridays when my girlfriend and I rocked up with a gift for Con's new son, Hunter, and Con told me he had to talk to me. I thought I was in trouble.

"Mike and I have been talking and we're really impressed with how you're coming along and I just have a proposition for you, which you can absolutely turn down," Con started.

"I'd like you to start hosting shows at the CoCo Club for the rest of the year."

I tried to play it cool but when I got outside the door to ask my girlfriend if she thought it was a good idea, she jumped into my arms as if we'd won the lottery.

Again, recognition from a Cork comic I really respected. It meant a lot.

The deal was that I'd host the Monday open mic every week and would get a spot every Wednesday on the big show. I all but bit Con's hand off. That was at least 20 minutes of guaranteed stage time a week!

Hosting scared the shit out of me because it involved talking to the crowd, which I'd never done up to then. I was a material guy.

But I fell in love with living in the moment on stage and not relying on my pre-written punchlines.

The hosting duties on Monday, which initially terrified me, soon gave me my favourite moments in comedy as I adored introducing a group of brand new comedians to the stage.

For several months, I spent more time with this new group of comics than I probably did with my family.

But all good things come to an end, according to that Nelly Furtado banger.

I had to hand in my comedy notice to Con last month and let him know that I was moving back to Dublin, meaning I could no longer commit to hosting twice a week in the CoCo.

Expecting to be given out to because that's the kind of worrier I am, I was met with nothing but thanks and well-wishes from Con, who asked me when my last show would be.

"You're headlining!" he said.

The months that had led up to my last gig saw me attempt to convince strangers to give our comedy show a chance but on October 9, friends and family packed out the CoCo Club for my send-off.

For the first time, my poor mother showed up and had to listen to my sex material but she endured it like a champ and applauded me off the stage but not before I had to fight back tears while thanking Con for everything he'd done for me. 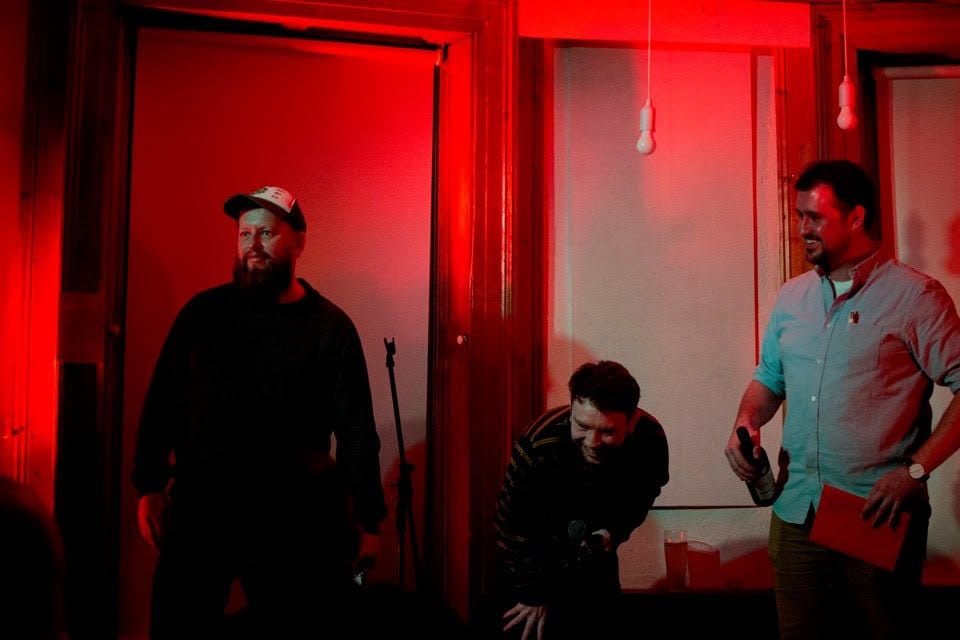 Down I walked, content with my performance but struggling to come to terms with the fact that I wouldn't be back on a stage for the rest of the year.

That's what I thought, at least, because I was immediately dragged back up on that very stage.

Host for the evening, Con, said: "That was all very emotional and it was lovely to hear Darragh say that I was an inspiration for him but, in fact, he's been an inspiration to the new comedians so could you come up here please, Andrew?"

Andrew Burke, a younger comedian who I had become quite close with, made his way to the stage with a bottle of red wine and a card, which had been signed by every comic who had wedged themselves behind the bar for the show.

Andrew thanked me for being supportive to the newer comics and three of us - Con, me and Andrew - hugged it out.

The room cleared out, I flicked off the upstairs lights and walked out the annoying heavy door that I'd walked through for the first time 15 months earlier.

Stand-up comedians have a reputation for being selfish and narcissistic and the irony of me attempting to deny that after making you read an 1800-word rant is not lost on me.

In fact, it is true that most comedians are selfish, narcissistic and, in some cases, even cutthroat but in my year in Cork comedy, I didn't encounter one comic who wasn't lovely.

So when you're in Cork next, get yourself into the CoCo Club and tell Con that Darragh sent you. And don't believe him if he tells you that I cried on stage...

Nine Crows pop-up coming to Cork - for one day only